Contributor Content If you mess up in your marriage, trying to earn back your partner's trust with an apologetic chest tattoos full... 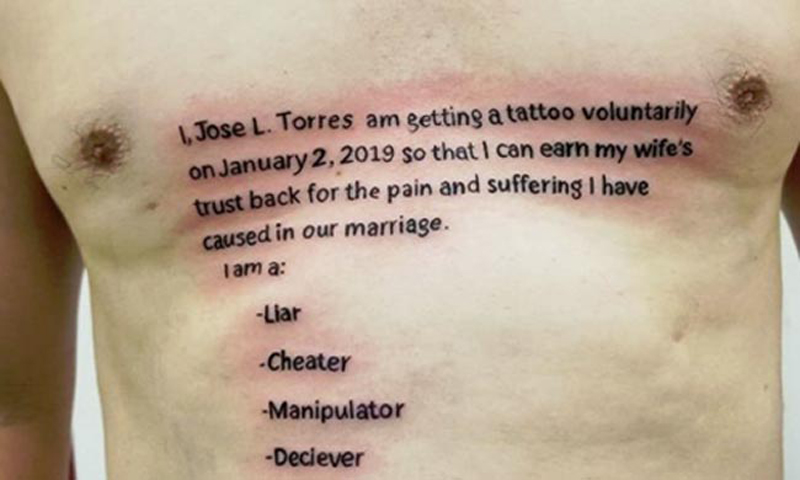 If you mess up in your marriage, trying to earn back your partner's trust with an apologetic chest tattoos full of typos is probably not the best idea. A cheating husband learned that the hard way after a photo of his chest tattoo went viral on social media.

A man named Jose L. Torres, presumed to be from Houston, Texas, allegedly wanted to prove to his wife that he was seriously committed to changing his ways, and decided that the best way to do that was to get a statement permanently inked on his chest. In the apology/confession inked nipple to nipple and all the way down to his belly button, the husband starts off by emphasizing that he is the tattoo voluntarily, and then goes on to say that he is doing it as a way to earn back his wife's trust after causing pain and suffering in their marriage. He then confesses to being a 'liar', 'cheater' and 'manipulator', among other things.

As if getting a groveling apology permanently inked on your chest wasn't bad enough, Torres' spelling wasn't exactly on point either, and sadly for him the tattoo artist was no spelling bee champion either. Soon after posting a photo of the tattoo on his Instagram page, artist "Tattoos by Jorge", who allegedly inked this masterpiece, started receiving comments about multiple grammar issues, like the spelling of "deceiver" and "disrespectful".

The tattoo artist defended himself by saying that English was his second language and that he always asks his clients to double-check whatever lettering they want tattooed before he starts working on it. 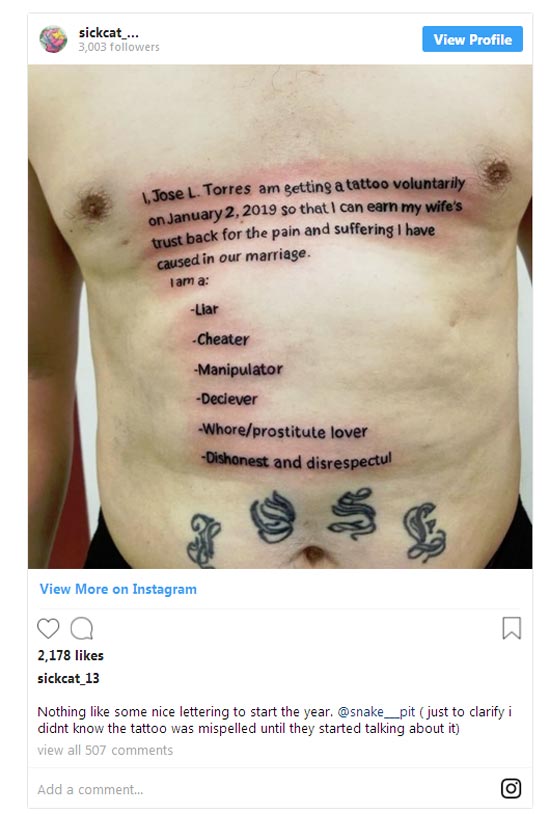 Asked how he could ink such a horrible tattoo on a client's chest, the tattoo artist explained that he asked the mane several times if he really wanted to go through with this, even right before he started tattooing him, but the man had his mind set.

"The only response I got from him was that he was sure because he mess up and he want it to prove he would change," Jorge wrote. "Even before i started tattooing I ask him again."

The photo quickly went viral on Instagram, then on Reddit and Twitter, and is still getting a lot of attention online. To be honest, this isn't something you see every day... As you can imagine, social media has been having a field day with this one, and some of the comments are truly hilarious.

"Better start saving for those laser removal sessions AND that divorce because they just guaranteed both," one person commented on Twitter.

"I bet they will have a nice time if they go together on the beach or any pool parties," someone else wrote.

"Your second wife will love this one," a sarcastic Twitter user wrote.
Get breaking news and in-depth coverage at Daily News