Contributor Content Egyptian authorities were probing a Danish couple after a video and a photo surfaced showing them climbing to the s... 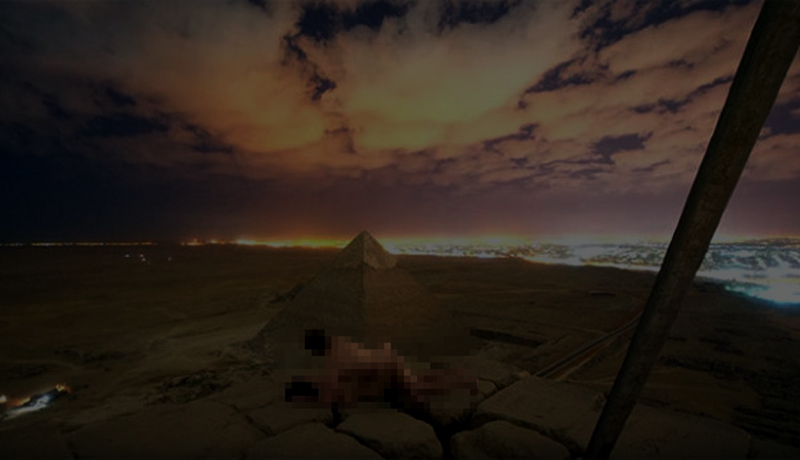 Egyptian authorities were probing a Danish couple after a video and a photo surfaced showing them climbing to the summit of the Great Khufu Pyramid of Giza and posing naked, the media reported on Saturday.

The three-minute video recorded at night, which has stirred outrage and controversy among Egyptians on social media, shows parts of the climb as a man and a woman scale what appears to be the Great Pyramid of Giza with the skyline of Cairo in the background, CNN reported.

When they reach the top, the video shows the woman taking off her shirt and finishes with a still image showing them in a naked embrace.

Minister of Antiquities Khaled al-Anani referred the case to the prosecutor general for investigation.

"In regard of what was circulated and published yesterday evening for a short video film depicting two foreigners climbing the pyramid at night, and then put a picture of them violating public morality, and to find out the truth and take the necessary action, Minister of Antiquities, D. Khaled al-Anani, decided to immediately refer the case of the incident and the film to the Attorney General to investigate the matter," the Egyptian Ministry of Antiquities said in a statement on Friday.

According to Egypt's Ahram Online, the video was uploaded on YouTube on Wednesday by self-described Danish photographer Andreas Hvid, who posts images on social media of different sites from high vantage points around the world, sometimes depicting nudity.

The director of Pyramids archaeological area Asharf Mohey said he will file a report to the prosecution demanding an official investigation into the explicit video.

Earlier, Mohey made remarks on the video as "fake and unreal," saying that climbing the pyramid is impossible due to restrictions. He further suspected its authenticity, referring to a "strange" light appeared in the footage that does not resemble the real view of the site that is closed everyday at 5pm.

Climbing pyramids is punishable by law in Egypt.

The 23-year-old Hvid, who is known for his urban roof-top photography, has since removed the video from YouTube, but a photo, which he has named 'Pyramid Fuck', of the two naked Danes can still be viewed on his personal website.

In the video description, Hvid wrote: "In late November 2018, a friend and I climbed the Great Pyramid of Giza (a.k.a. Pyramid of Khufu, Pyramid of Cheops). Fearing to be spotted by the many guards, I did not film the several hours of sneaking around at the Giza Plateau, which lead up to the climb."

Dane said he won't be going back to Egypt in the near future in fear that he will be arrested over the photo session, which he isn't very proud of.
"I am sorry that so many people got so angry. But it's worth noting that I've got a positive response from many Egyptians too. 'Pyramid Fuck' was the dumbest idea I could have come up with. Privileged western youth at its worst. It just needed a joint and a bottle of vodka," Hvid told Ekstra Bladet tabloid.
Get breaking news and in-depth coverage at Daily News