A thief stole gifts meant for thousands of kids. Then this couple raised $45,000 to save Christmas

Lucas and Maddie Burnley shop for Christmas gifts for kids in need. By Ryan Prior , CNN For the past two months, the community...

By Ryan Prior, CNN

For the past two months, the community in Bridgeport, Connecticut, has been stockpiling toys, preparing to give local children in need the gift of Christmas.

"Our fingers were numb. Our lips were chapped," Torres told CNN.

But then thieves broke into four of those storage pods, stealing about 1,000 toys, dealing a blow to their painstaking work.

Meanwhile, Lucas Burnley, a 36-year-old knife maker from Cape Cod, Massachusetts, was talking to his mother-in-law. She told him about the church robbery in Bridgeport, more than 200 miles away.

Burnley's just a regular guy. "I own a really, really small business and just want to feed my family," he said. But he has a big heart and has long had an extra helping of Christmas spirit.

For the past six years, Burnley and his wife, Maddie, have raffled off their handcrafted wares to help fund Christmas gifts for kids, including the Marine Corps' Toys for Tots program. The first year they raised $2,500. Their initiative snowballed annually among knife connoisseurs, taking in $52,000 last year.

Burnley thought it couldn't get much bigger, but he said people started contacting him saying they were saving all year for the next raffle.

Ticket sales opened December 4, and after closing 24 hours later, the numbers racked up to nearly double last year's total: a whopping $92,000. Then the shopping spree began. "When I'm buying toys, I don't feel like Santa, I feel like a kid," he said.

The Burnleys gave tens of thousands of dollars in toys to Cape Cod's annual "Stuff-a-Bus" initiative, and then devoted $45,000 in toys to the faraway church Maddie's mother had mentioned. All told, organizing the raffle, collecting the money, and buying and distributing the presents occupied two weeks of full-time work. Rather than knives, the Burnleys' workshop was overflowing with toys.

Lacking a sleigh, they packed up a truck Tuesday night and planned to deliver the toys to the church themselves.

A faith larger than fear

Even as the Burnleys were en route, Torres, the Connecticut pastor, feared disappointing the thousands of kids whose Christmas hopes were resting on his shoulders. Though he knew to expect the Burnleys' donation, he had no idea how big it was going to be. He was going to have to rely on faith.

And the pastor's faith paid off in unlikely forms. After church services, three tough-looking young men approached him, asking for a meeting. They were members of the Latin Kings gang, and wanted to help get the gifts to the kids.

The gang members were among the volunteers with Torres as the Burnleys pulled in with their truck full of goodies after a three-and-a-half hour journey. Lucas Burnley was a stranger, but Torres said embracing him as he jumped out of the truck was like reuniting with a friend after a long absence. "It was like a hug felt 'round the world," he said.
Unloading the boxes, Lucas was impressed with the faith of those around him: "Someone said, 'We don't know how, but the Lord will provide.'" Though Lucas isn't religious, Torres noted how the Burnleys' act of selflessness lifted their own spirits, as well.

"You could just feel the joy coming out of them," Torres said.

Greater Bridgeport Christian Fellowship is set to begin distributing the toys to families Saturday and again the Saturday before Christmas.

"Tragedy can knit a community together," said Torres.
Get breaking news and in-depth coverage at Daily News 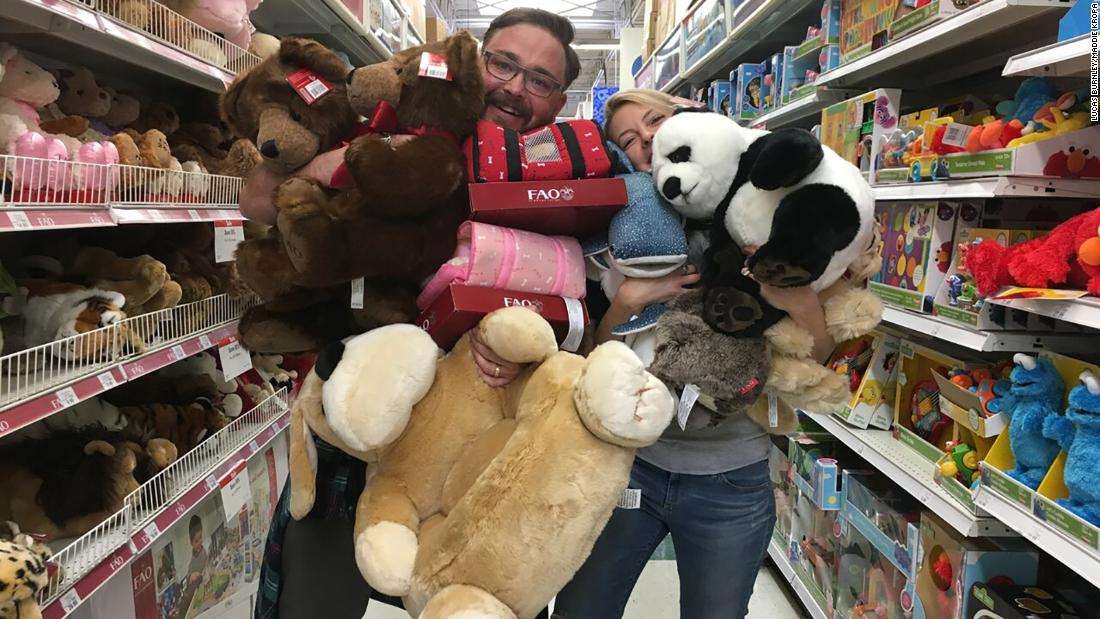