Vijay Gupta has left his violin at home today.

Instead, the Los Angeles Philharmonic musician and social justice advocate - whose nonprofit Street Symphony has been performing free concerts for Los Angeles' homeless community and in county jails since 2011 - strolls the trash-strewn, tent-studded sidewalks of downtown's skid row hands-free this afternoon, his arms hanging loose beside him.

But there is still music.

A baseline of rumbling car engines and ambient chatter mixes with the steady, percussive thumping of footsteps and intermittent car horns. There's a guttural moan off to the side, the squeak of a shopping cart wheel and a sudden, vocal shriek in the distance, both disturbing and triumphant-sounding at once. Then comes the crinkle and thud of a crushed, tossed plastic water bottle.

This symphony, more than any other piece of music, is a call to action for Gupta, a recently named 2018 MacArthur fellow who sees his place of prominence in the arts world as an acutely political position.

"We need arts now more than ever as a public health intervention," he says, pausing at the corner of 6th and Crocker streets. "Let's cross here," Gupta says, both at ease in his surroundings and keenly aware of potential dangers. "This is an intense place." He glances back over his shoulder, then spots someone he recognizes. "Hey brother, how are you?" Gupta says, offering a friendly hand-slap.

The MacArthur recognition will allow Gupta to shine an even brighter spotlight on L.A.'s homeless community and wake up - and shake up - the establishment, he says. He hopes to "be a disrupter."

"L.A. is home to the largest homeless community living on the street in the U.S. We also have the largest incarcerated population of anywhere in the country - our county jails are effectively the nation's largest psychiatric institutions," he says. "And these are the sites where street symphony makes music. But we're not only in these places to perform. The role of the artist in today's world is not only to heal and inspire, but to disrupt and provoke. One of the patterns that Street Symphony is disrupting and asking questions around, is 'why should great art only happen at the concert hall?'"

By now Gupta's personal story, by the numbers, is well known.

He picked up the violin at age 3, was performing at 4 and was enrolled at the Juilliard School's pre-college program by 7. His parents, immigrants from West Bengal in India, had relentlessly pushed him to study and play music from when he was in diapers; in his teens, they groomed him for a career as a doctor. He entered Marist College at 13, earning a pre-med biology degree. When most 17-year-olds were headed to their high school senior proms, Gupta headed to Yale, where he graduated with a master's in music at 19. That same month, in 2007, he beat out 300 applicants for a position in the L.A. Philharmonic, the youngest musician in the orchestra at the time.

Gupta is quick to note the sacrifices his parents made for him - his dad, who came to the U.S. undocumented, worked in restaurants peeling potatoes and in baggage claim at JFK before getting his green card and opening a travel agency in upstate New York. His mother, who had married at 17, gave up one odd job after another to shuttle Gupta and his younger brother to music appointments. But his family was "a pretty abusive household, physically, psychologically and emotionally," he says, and the pain and isolation of being cordoned off in windowless music practice rooms for hours upon hours a week was profound.

But that darkness is also what connects Gupta to the skid row community, he says, where in many ways he feels more at home than in the spotlight at Disney Hall.

"I'm seen here," he says. "Often playing in the spotlight, you're not fully seen, your shadow is not seen, whereas I come to skid row and I'm more accepted and more loved for the wholeness of who I am. I'm able to own my shadow, maybe even celebrate my shadow, because it's actually the pain that allows me to connect with people and understand that I'm as messed up. The construct between 'us and them' is a myth."

A 2008 introduction by Times columnist Steve Lopez to Nathaniel Ayers, a Juilliard-trained double-bass prodigy who suffered from schizophrenia and lived on skid row, would be life-altering for Gupta. He began giving violin lessons to Ayers soon after, then wondered: "How many other talented, resilient, creative people like Ayers were out there?" That led to his co-founding Street Symphony in 2011.

The answer is "thousands," Gupta says. Street Symphony - composed of professional and student musicians as well as current and former skid row residents - has put on nearly 500 concerts to date at homeless shelters, county jails, treatment centers and other facilities. It also partners with L.A.'s Urban Voices Project, which it fiscally sponsors, and offers community workshops as well as yearlong fellowships in which skid row musicians study with professional musicians.

Through Street Symphony, Gupta says, he's surveyed a deep reservoir of talent. There's the Jamaican reggae DJ and former skid row resident Sir Oliver, who now lives in Watts; there's the Arabic violinist Malek Vossough, whom Gupta met at the Midnight Mission and who now lives in SRO housing in skid row; there's the composer Benjamin Shirley, who lived at the Midnight Mission for 26 months and is now a paid employee at Street Symphony.

"The skid row community is one of the most vibrant, artistic communities in America today," Gupta says. "These are people who face structural racism and extreme poverty and other injustices and for that community, making music is a lifeline.

"The work of Street Symphony," he adds, "is for us to be a conduit. My work is not to empower people or help them find their voice. There is a voice here - and it's a vital, resilient, brave voice."

Gupta says he was beyond shocked when he learned of the MacArthur award, which comes with an unconditional $625,000 stipend. "We, as artists, face so many cuts across the board where we really have to continue to justify why we exist, and to actually have this no-strings-attached support is one of the greatest possible gifts," he says.

He's not sure yet how, exactly, he'll use the grant money beyond investing in more resources for Street Symphony - between his L.A. Philharmonic commitments and advocacy work, he puts in 90- to 100-hour work weeks, he says, and could use more employees. He'd also like to expand the fellows program. But not having a fully-set-in-stone plan is the point, he says. Because as much as the MacArthur award is a moment of action for Gupta, it's also a moment of pause - for the first time in his life.

"One thing I realized as an artist and someone committed to social justice is that if I'm able to take care of myself, I will be more present to the issues and communities I care about," he says. "So of course this has a real financial impact on my life, and I am now free to dream beyond Street Symphony and take a look where I want to be as an artist, and as a citizen, in the next 20-30 years; this totally redefines my life."

That could mean tending to basic needs such as "therapy, acupuncture, diet, sleep," he says, or poring over books about the history of L.A., chronic homelessness, mental illness and addiction as well as taking classes about public policy. Educating himself, essentially, toward next steps, he says.

"I want to understand why is it that we propose a $3.5 billion jail expansion in L.A. county but are not willing to invest in people and in services? It sends a message that this community is not worth investing in."

His post-MacArthur moment is also a moment of vulnerability. Gupta is going through a divorce. His parents disowned him, he says, when he started dating his ex-wife, who is white. His father died in 2017, but minutes before the MacArthur announcement, he reached out to his mother via email "to say thank you and that I just really missed Dad," he says. "She wished me well. It's been an insane year of highs and lows."

Every December, Street Symphony stages a performance of Handel's "Messiah" at the Midnight Mission. Audiences, who come from all over the city, must walk several blocks through skid row, past tents and over sleeping bodies, which is a purposeful disruption, Gupta says.

"Where we put our presence, where artists are able to shift where an audience puts their presence, is a performative act," he says. Our "Messiah Project" begins the moment the audience parks."

This December, Street Symphony's fourth annual "Messiah Project" will feature excerpts from Handel's oratorio and original works by skid row community members performing side by side with musicians from the L.A. Phil, the Colburn School and vocalists from the Los Angeles Master Chorale. The Urban Voices Project will perform intermittent choral sets. And the skid row drumming ensemble Ashe Ase Drummers From the Heart will play outside on the sidewalk.

Blending those vastly different worlds - orchestra members and patrons from Disney Hall with the skid row community - through creative collaboration is essential for our future, Gupta says.

"Will the crisis of homelessness get worse? Yes, it will," Gupta says. "Looking forward 20-30 years, we're gonna have climate refugees. So we need to have a handle on how to talk to people experiencing displacement because we're gonna see a lot more of it."

Which is where "disruption through provocation" comes in, a beautiful, cacophonous mess, as Gupta sees it.

"I want to make such a beautiful noise in skid row that the entire city takes notice," Gupta says. "I want the country to take notice."
Get breaking news and in-depth coverage at Daily News 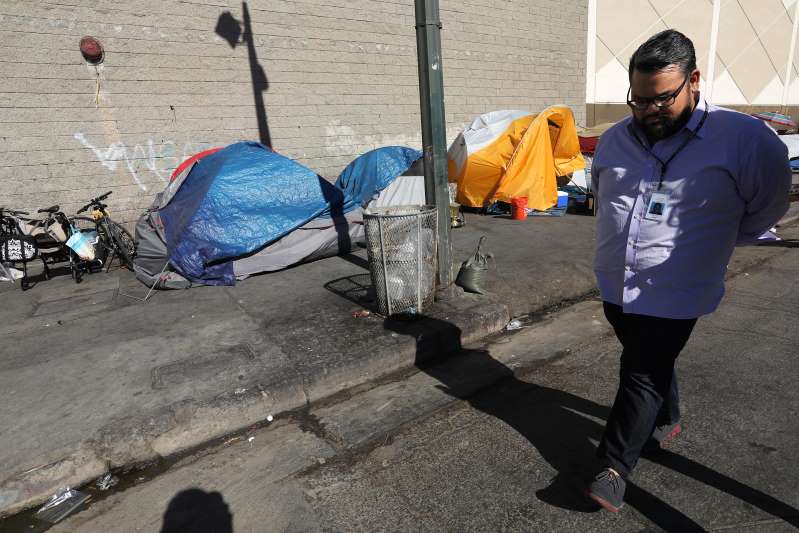