Nebraska town loved this firefighter's Christmas lights. After he died, they put them up

© Minda Haas Kuhlmann Via Facebook Nebraska town loved this firefighter’s Christmas lights. After he died, they put them up. B...

In the town of McCook, Nebraska, home to about 7,600 people, everyone knows which house belongs to Raleigh Haas.

It's the two-story, six-bedroom home with the big front porch, across the street from St. Patrick School and church, decked from top to bottom in lights at Christmas.

Haas and his family outline the house in white lights and string dozens of strands -- thousands of lights -- in the trees and bushes out front. It's not a gaudy, Clark Griswold "Christmas Vacation" display, said Haas' daughter, Minda Haas Kuhlmann, who lives in Council Bluffs, Iowa.

If it was a Christmas song, she told McClatchy, this display would be "Silent Night."

These lights that the family turns on the night after Thanksgiving have deep meaning.

"The whole idea, the whole theme is waiting for the light of the world," said Raleigh Haas' wife, Kathy.

He died in August at the age of 62 after suffering a heart attack, a passing marked with a front page story in the McCook Gazette under a headline that hailed him as an "embodiment of service."

The town grieved the sudden loss of a longtime volunteer firefighter, an active volunteer, a church-going man and someone who had trained countless EMTs and paramedics in the area.

"Since the news of Raleigh's death started circulating through McCook Tuesday morning, many have been in shock and mourning for the man who always had a big smile for everyone," the story on August 31 said.

"Raleigh touched lives everywhere he went ... there doesn't seem to be anyone who didn't like Raleigh."

When he died, it seemed that the Christmas lights might go away, too.

Until, that is, his brethren at the McCook Fire Department stepped up, quite literally -- they climbed ladders and scaffolding and put up all those lights on the Haas house last weekend.

"Without their help, we might have had to spend our first Christmas without him in a dark house, which was just too sad to even consider," Kuhlmann wrote on her Facebook page.

It's one of the houses that people in McCook stop by to look at every Christmas, said Marc Harpham, the town's fire chief. Putting up the lights was the least the department could have done, he told McClatchy.

"Firefighters are a unique profession because we're all family. We refer to each other as brothers and sisters," he said. "When we lose anyone it's hard, but when you lose a member that's been with us this long and has done this much for the community, it's really hard."

The tradition began more than 30 years ago when Haas's mom gave the family some extra boxes of Christmas lights, Kathy Haas told McClatchy. "So he put the Christmas lights around the door and the windows on the front, and they were white lights," she said. "That was the first year. And the next year it was like, 'Hey, you know, we could buy more lights and do this and this.'

Then somewhere along the way Kathy Hass became the owner of her family's lighted nativity scene. That went up, too. (The baby Jesus doesn't join the scene until Christmas day.)

It got to the point where the family put up so many lights that they left the ones on the uppermost reaches of the roof in place year-round, "then we prayed for it not to hail," Kathy Haas said.

The family's electric bill for December swells to double its usual size, even surpassing the hot, air-conditioned months of summer, Kathy Haas said.

She estimates that the evergreen tree in the front yard alone holds at least 3,000 lights, so many that one of the four outdoor circuits the display requires is used by just the tree.

Always conscious of safety and to avoid slippery, cold shingles, her husband would install the lights in October. As the four Haas children got older and moved away, they would come back for "Christmas Light Weekend." Dad's steaks were tasty bait.

"Years ago when my siblings and I were younger, we kept encouraging dad to add lights to more and more parts of the house," said Ryan Haas, who with his sister, Minda, helped the firefighters decorate over the weekend.

"I guess the joke was on us because as we got older we began to join in the process, and it grew to lighting the entire house," he told McClatchy.

"It would be a big job, depending on how many strings made it through the previous year. Dad loved the experience of decorating with us, and he took great pride in how the house looked at Christmas."

Not having the lights this year, Kuhlmann said, would have disappointed the members of her parents' church across the street who look forward to seeing the house lit up when they leave midnight mass on Christmas.

"I get the feeling that not having them wouldn't have just made my family sad, but it would have also been kind of a bummer for the people of our church," said Kuhlmann.

As far as the fire chief is concerned, the firefighters are ready to pull this duty "year after year" now.

"We had a lot of fun that day with the volunteers," said Ryan Haas. "I worked hard but with a big smile on my face the whole afternoon, exactly the way dad had all those years before.

"The house will again look great this year at Christmas, thanks to the generous efforts of the fire department, with their work as a fitting tribute to the spirit of service dad embodied during his life."

Kathy Haas said the family will stick to its tradition of having a quiet lighting ceremony post-Thanksgiving.

Her granddaughters will push the buttons on the remote to turn everything on. "And we'll cross our fingers" that all the bulbs light up, she said.
Get breaking news and in-depth coverage at Daily News 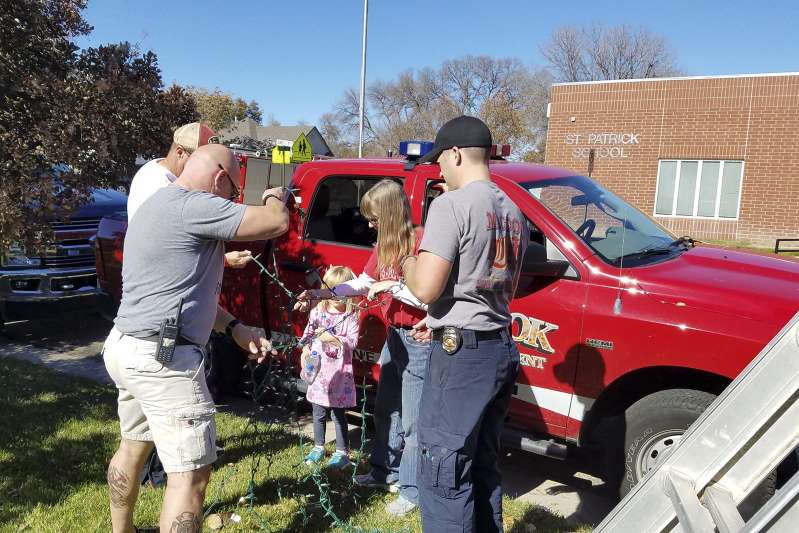