Dad of 5 Reunites With Stranger Who Donated Him a Kidney

© Provided by CBS Interactive Inc. Robert Leibowitz and Richard Sully will forever share a bond — and an organ — because of a T-shirt...

By Stephanie Officer, Inside Edition

Robert Leibowitz and Richard Sully will forever share a bond — and an organ — because of a T-shirt.

Earlier this year, Leibowitz, a father of five, was suffering from chronic kidney failure. With little to lose, he decided to make a T-shirt asking for a kidney, complete with blood type and phone number.

Leibowitz wore it during a family vacation to Disney World, hoping a little bit of that magic would rub off on him.

Someone saw him and snapped a picture that went viral. The image caught Sully's attention.

"I figured a guy that desperate to put his cellphone on his shirt at Disney really wants to spend more time with his kids and not die," Sully told InsideEdition.com.

At that point, they were total strangers.

Yet, that didn't stop Sully from boarding a Greyhound bus and making 740-mile trip from Indiana to New York City — before he even knew he was a match.

Fortunately, it turned out he was, and Leibowitz has a new lease on life, thanks to Sully.

"He's the greatest guy in the world. He's my hero. My family loves him," Leibowitz told WCBS.

Leibowitz said he feels younger with his new kidney, while Sully is glad he was able to change a life.

Now, the two are doing the National Kidney Foundation's fundraising walk for the first time. Their goal is to show people how simple it is to give.

“It's so easy to be a donor," Sully said.
Get breaking news and in-depth coverage at Daily News 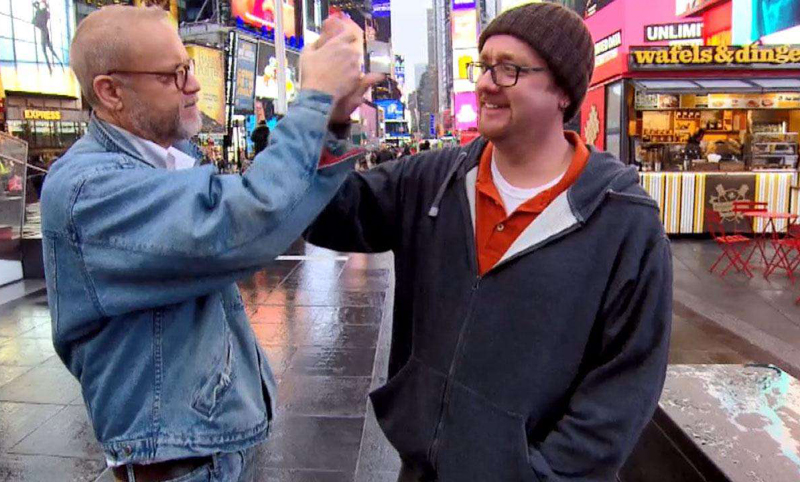