A small bookstore had to relocate. Hundreds formed a human chain to move its books.

© October Books A small bookstore had to relocate. Hundreds formed a human chain to move its books. The Washington Post For ...

For more than four decades, October Books has been a fixture in Southampton, England.

Over the past 15 of those years, the independent bookshop and cooperative called 243 Portswood Rd. home, nestled amid an ever-changing strip of cafes, clothing stores and pharmacies on the city’s main street.

Yes, it sold books, but it also became a gathering place for people seeking a “local, radical and eco-friendly” community center. However, with each passing year, the store struggled with increasing rents until it no longer made sense for October Books to remain.

Last November, the co-op’s members gave their landlord notice that they would be leaving their Portswood Road space and began seeking a property to buy. As fate would have it, a former bank just down the road went on the market — at 189 Portswood Rd. — and it was perfect for what October Books’s members had in mind.

A series of small miracles happened. A nonprofit organization that supports the homeless agreed to go in on the new property with October Books. In January, a bank accepted its proposal to buy the building in question.

Perhaps most extraordinary of all, the bookstore was able to raise more than $500,000 from the community over six months to purchase the new space. The sale was finalized in August.

“It just shows how much the community wants a bookshop on the high street,” Clare Diaper, a co-op member, told The Washington Post.

There was one lingering logistical hurdle: How would they move thousands of books from one storeroom to the other?

A radical idea was put forth: What if they formed a human chain and simply passed books, handful by handful, down Portswood Road?

With the two properties about a tenth of a mile apart, co-op members estimated that they might be able to pull it off — if they could persuade at least 150 people to show up at once.

“We wanted to do something everybody could get involved in,” Diaper said. “The idea of the human chain really came about because it didn’t need people to be physically fit or really strong. Anybody from young children to pensioners [retirees] could get involved. That’s certainly the community that turned out.”

For several weeks, the bookstore handed out fliers advertising its need for help. A few hundred people expressed interest in a Facebook event for the human chain. But would anyone actually come?

On Sunday morning, Diaper awoke to “massive gray clouds” and a biting chill. As she walked to the shop to prepare to move the books, she feared that the weather would keep most people home.

Instead, she and other co-op members found dozens of people waiting to help. Soon, that number grew to more than 200. They lined up along Portswood Road, almost shoulder to shoulder, connecting October Books’s old and new storerooms.

At 11 a.m. Sunday, the first of the books began being passed from October Books’s old storeroom, down a flight of stairs, onto the street, past the fast-food joints and the drugstores and the coffee shops, and eventually into the vault of a freshly painted former bank.

The co-op’s members had planned to move 2,000 books in two hours. They moved them all in an hour.

“THAT is community, friends,” the bookstore’s volunteers posted on Twitter afterward.
Get breaking news and in-depth coverage at Daily News 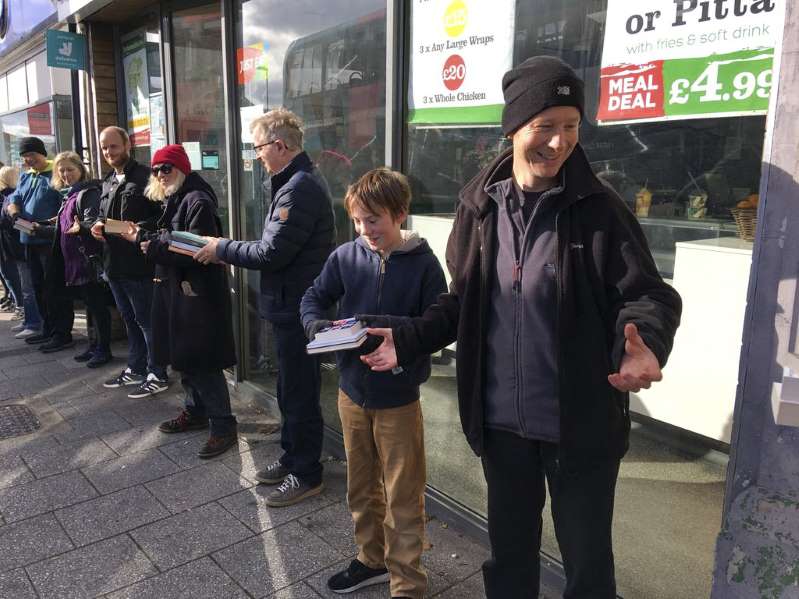