WBAL TV Baltimore A Maryland fifth-grader is raising money and awareness for breast cancer research by encouraging her entire school to... 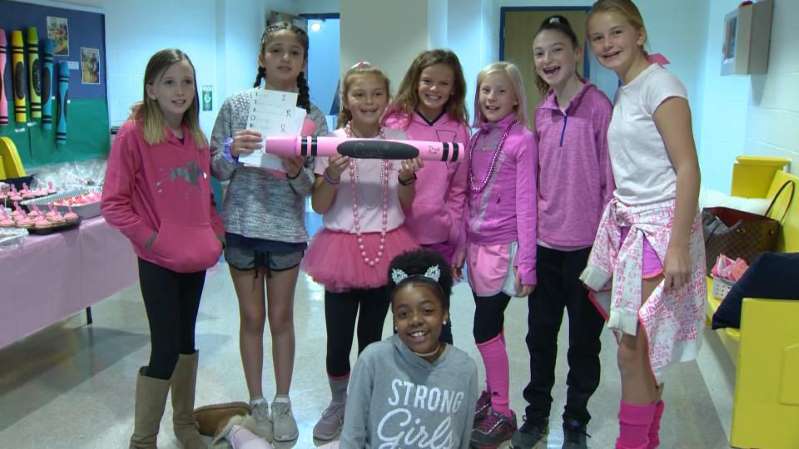 A Maryland fifth-grader is raising money and awareness for breast cancer research by encouraging her entire school to think pink.

Lauren Blumenfeld, 10, and her crew are trying to sell sweet treats in a hallway at Roland Park Country School, turning it into a bakery for Think Pink Day.

"It's a day where we all come together and donate money to try to stop cancer," Lauren said.

Lauren created Think Pink two years ago, first by selling ribbons, and now she has the entire school involved, wearing pink and thinking about a cure.

"When I was little, my grandmother had breast cancer, and I realized that a lot of girls at school, their family members probably had it too, so it would be a good place to raise money and awareness," Lauren said.

"Both of my grandparents actually survived breast cancer," said Storie Drake, a classmate.

"My cousin had breast cancer and she passed away from it," said Milan Gilliam, a classmate.

All of the money from Think Pink goes to the Sidney Kimmel Comprehensive Cancer Center at Johns Hopkins. They have donated more than $1,200 so far, and this year, Roland Park Country School students made cards for patients.

"As a young student to be already thinking about giving back to others with something that's bigger than her, than this whole school, (that) shows she has the seeds for great philanthropy," said Amy Mone, with the Sidney Kimmel Comprehensive Cancer Center at Johns Hopkins.

And Lauren's not done. She hopes one day every school in the country will Think Pink.

"It makes me feel really happy because I know, one day, we'll make a difference and we'll stop cancer," Lauren said.
Get breaking news and in-depth coverage at Daily News