© Provided by CBS Interactive Inc. By Deborah Hastings , Inside Edition Age is just a number and it don't mean a thing to...

Age is just a number and it don't mean a thing to Bill Jones, who's still turning cartwheels at 72.

The Massachusetts grandfather was a professional dancer back in the day, when vaudeville was still an art form and people lined up to see a quartet of boys, calling themselves the Four Flashers, tap dance while executing back flips and somersaults.

Jones made his most recent appearance with his 10-year-old granddaughter Maeve, executing an intricate tap routine, complete with cartwheels, for her dance school's annual recital.

"I was very proud" to be asked to dance by Maeve, Jones told InsideEdition.com. "I said of course I would do it."

Maeve's mom put a video of their performance on Facebook, where it became an internet sensation.

Fame is not foreign to Jones, whose dance team performed with the likes of Johnny Mathis, Barbra Streisand and the Lennon Sisters. He started tap dancing as a child, and kept it going all the way through college.

As a father, he performed alongside his daughter. So it seemed only natural to dance with his granddaughter, who has also taken up the family tradition.

They practiced their routine to "Cups (When I'm Gone)" by Anna Kendrick, about six times, in one-hour intervals.

"I was very nervous because we didn't have too much time to practice and I didn't want to mess up," Maeve said.

Despite the lack of practice, their performance, and its ending, brought down the house.

"I was really surprised he could still do a cartwheel," she said with a big smile. They were supposed to execute the move in tandem, but grandpa was a little late getting off the mark. "We were pretty close," she said.

Jones was just happy he could do it at all.

"I'm 72, the only trick I have left is the cartwheel," he laughed, pronouncing the maneuver "caht-wheel," in his thick Massachusetts accent.

Both grandpa and granddaughter acknowledge tap dancing is a vanishing art form. Gone are the days when Shirley Temple hoofed it with legendary tappers such as Bill "Bojangles" Robinson, and made it look easy.

And tap dancing is not at all easy, says Maeve, who is in the fifth grade.

"Tap is really challenging, but that's what makes it fun. You really have to listen to the music." She should know. She's been tap dancing since she was 6. It took nearly two years before she felt like she could really master the footwork.

Dancing at her recital with her grandfather "made me happy and proud" she said. She wants to perform with him again, she says, and "we definitely have to put another cartwheel" in the routine, despite her grandpa's age.

"He doesn't seem old when he dances," she said.
Get breaking news and in-depth coverage at Daily News 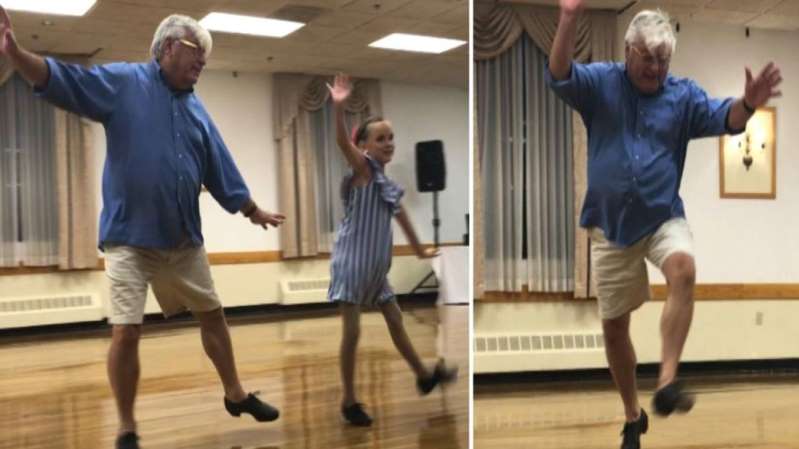