COLUMBIA, S.C. - Every so often, Jordan Dinsmore gets a flurry of Facebook messages from admirers across the country.

They say they just saw a viral story about her for the first time, and can't help but commend the quick thinking and bravery it took for Dinsmore to hurl herself from a moving car to escape abductors.

But, nearly 15 months after that nightmare of a night, Dinsmore says the most important messages come from fathers who promise to prepare their daughters by telling them her experience.

"Victims don't have to be victimized," the University of South Carolina senior told The State in a recent interview, repeating the central theme of her public-speaking engagements since the kidnapping. "You can do everything in your power to take control of the situation."

That night in July 2017 put Dinsmore into a national spotlight, changing the aspiring detective's life. More than a year after Richland County Sheriff Leon Lott nicknamed her "007," Dinsmore says the attack showed she can handle life-or-death situations and made her even more resolved to enter law enforcement.

Officers and others who have worked with the 21 year old since the kidnapping are betting on her to succeed.

"There is a spot for her no matter when she wants it," Lt. Chris Lindler said of a possible internship with the Richland County Sheriff's Department. "I'd take her with me in a minute. She could work in our victim services unit."

Time and time again, to TV hosts and public groups, Dinsmore has explained how a trio of armed teenagers attacked her just after midnight in her apartment complex's parking lot, just south of downtown Columbia.

Two of the teens forced her into her car at gunpoint – making her drive because they didn't know how to work a stick shift - and told her she would be raped at a house nearby.

After they forced her to stop at an ATM and withdraw $300, the maximum amount allowed, from her account, Dinsmore unclicked her seat belt. Minutes later, she saw a chance to escape in the form of approaching cars.

Hoping one of the cars would stop for her, Dinsmore purposefully missed a turn the gunmen had ordered her to take, threw the car into neutral, pushed open her door and lunged out onto the asphalt highway at 35 mph as her 2009 Scion veered off the road.

The next month, the Charleston native received the Bobby Tucker Courage Award from the S.C. Black Belt Hall of Fame.

She traveled to New York City to retell the story on "The Dr. Oz Show."

Afterward, customers at her restaurant job would tell her she looked oddly familiar, but they couldn't place her, until she 'fessed up about her story.

FBI agents, who had read about Dinsmore, invited her to their Columbia field office, where she took an hours-long tour and returned home with souvenirs.

"I always tell my roommate, 'Don't use my FBI cup,'" Dinsmore says with a laugh. "That's my favorite cup."

Dinsmore closely followed the trials of her abductors. She spoke at a hearing, telling the court the teens had stolen her peace of mind. They were found guilty and could remain in juvenile detention until they turn 21 years old.

For weeks, she had nightmares in which she ran from some unknown danger until she woke.

Today, she is more cautious, especially in dimly lit areas. She glances over her shoulders and looks strangers in the face, making sure she can identify them if they attack.

She got a dog, a 2-year-old, boxer-and-pitbull mix, named Bandit, who follows her around and licks her legs when she is upset.

And she has made a habit of calling her apartment complex's security number when she returns home late so a guard can make sure that she has made it safely to her door.

Dinsmore's story caught the eye of Shannon Henry, the chief executive of Surviving Assault Standing Strong, an Irmo-based group that has trained women in self defense and empowerment for 20 years.

Henry messaged Dinsmore on Facebook and invited her to an intense self-defense class that, according to Henry, teaches women how to get away from attackers by inflicting pain on them.

Dinsmore picked it up right away, and others in the class looked to her as an example.

"She came to class within a very short time after the incident. She came in with such a positive attitude," said Alex Duncan, a Surviving Assault instructor who taught Dinsmore. "She had a huge smile on her face. She was really happy to work with the other girls in her class."

Since then, Dinsmore has spoken once a semester to Henry's classes at USC and Columbia College. The students hang on every word, Henry said.

"They eat her up. They think it's amazing," Henry said. "Peer-to-peer mentoring is so big. A lot of times, girls think, 'Oh, that'll never happen to me.' But they see somebody their age that it's happened to, and that she got out of it."

Dinsmore said speaking to groups about her story has made her interested in victims' advocacy, possibly as a side gig while she pursues her dream of becoming a detective.

The USC criminal justice major is set to graduate in May and is planning her next move, including interning with a local law enforcement agency.

"Part of what's really interesting about Jordan is that she's cute and she's petite, but that's her camouflage," Henry said. "She's a warrior, and her ability to use it, when she needs to, is really powerful."
Get breaking news and in-depth coverage at Daily News 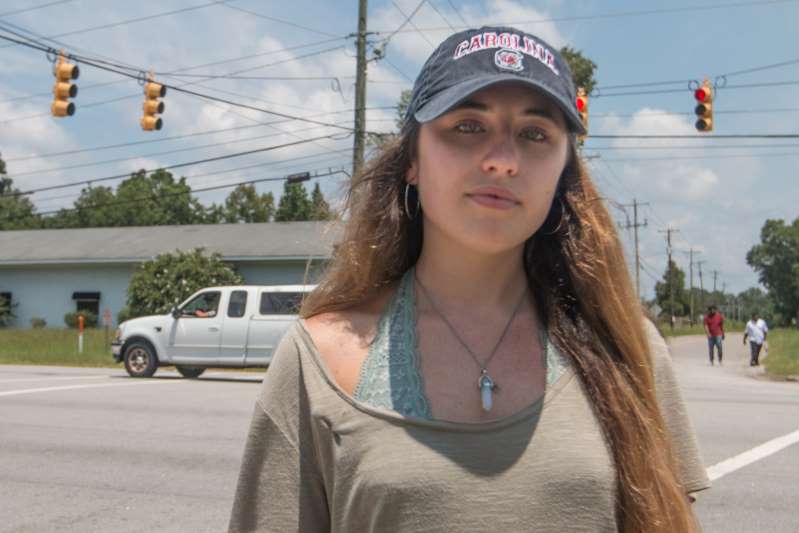