Animal rescuers in Britain were called to the home of an elderly couple who spotted a raccoon wedged between two walls in their gard...

Animal rescuers in England said an elderly couple were shocked when they discovered the animal trapped in their garden was a raccoon.

The RSPCA said Gordon Skelton, 78, and his wife, Joan, 74, contacted the animal rescue charity Monday to report a raccoon was trapped between their shed and a wall in their Alfreton, Derbyshire, garden, but rescuers expected they would actually find a badger that resembles a raccoon.

Inspector Helen Mead said she arrived at the home and discovered to her surprise that the trapped animal really was a raccoon, which are native to North and South America.

"A neighbor who lives at the back of our house came round to say that she saw a raccoon on her garden and then it ran off and was stuck between the shed and greenhouse at the bottom of our garden," Gordon Skelton said.

"I got my ladders out and went to have a look and I was surprised to see it really was a raccoon," he said. "I have only ever seen them on television or in books and certainly not something I would expect to come across in Derbyshire."

Mead was able to use a catch pole to lasso the raccoon and pull it to safety.

"He clearly didn't want to be caught but I don't think he was wild. I believe he may have been someone's pet so am keen to find out who he belongs to," Mead said.

The RSPCA said raccoon sightings are extremely rare in England and Wales, where they are considered an invasive species and were outlawed as pets in August 2016. Officials said pet owners are still allowed to keep raccoons they possessed before the regulations went into effect.

The raccoon was taken to the RSPCA's Stapeley Grange wildlife center in Cheshire.
Get breaking news and in-depth coverage at Daily News 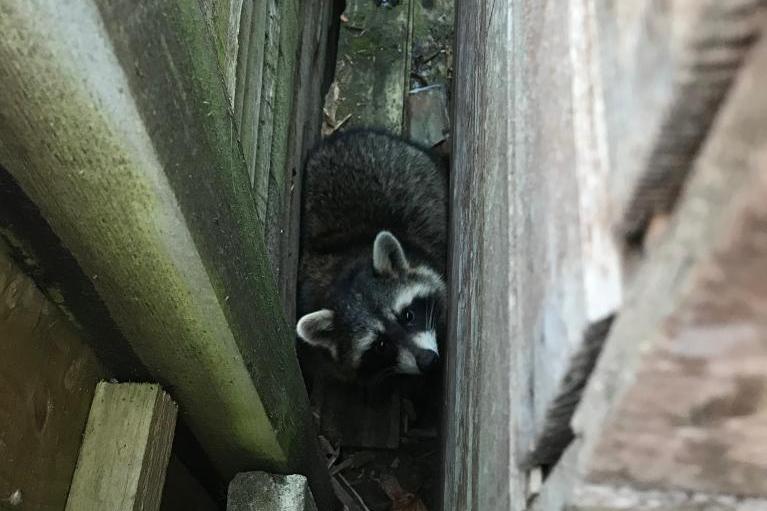