© Courtesy Keith Pugmire Keith Pugmire led a volunteer effort to help neighbor Kathy Felt, out of her wheelchair each night. B...

Kathy Felt can't get out of her wheelchair under her own power to get into bed at night.

But the 66-year-old is a beloved figure in the neighborhood she's called home for almost four decades. So for the past 10 years, a rotating cast of volunteers have showed up nightly like clockwork, lifting her into bed and tucking her in.

This is how folks care for each other in Sandy, Utah, just south of Salt Lake City. The nightly ritual enables Felt to avoid nursing homes and sleep in her own bed.

But the volunteers find it equally uplifting. Some 60 men are on a schedule to visit Felt two at a time. Even more neighbors want to help.

When asked how she feels about this outpouring of help, Felt says, "It just makes me feel very humble."

Felt was diagnosed with multiple sclerosis in 1978, when her two sons were little.

The neurological disease can affect vision, balance, muscle control and other essential functions. As it took a toll on Felt, her sons Chad and Todd embraced more responsibilities.

By 2006, the disease became so debilitating she needed help getting in and out of bed each day. Her sons made 10-minute drives, twice a day, to help.

"It was for about a year and a half or so, maybe even more. They were getting me up in the morning putting me to bed at night," Felt says. "My greatest gift and my greatest blessing of all has been my two sons."

But the schedule was grueling, and Felt began to contemplate moving into a nursing home.

"We just got together as a neighborhood and church group and said, 'What can we do, Kathy, to help you and your family out?'" Pugmire tells CNN.

"It was determined that the best thing we could do is have a couple of men come in each night and help her."

Pugmire and Felt didn't agree upon just how long the arrangement would last.

"He said let us do this for as long as we can," Felt says.

Pugmire and Felt have been backyard neighbors and friends for 38 years.

Pugmire, 65, an executive with Recon Dynamics, an asset management company, figured out a system to help Felt.

Those people included friends, neighbors and at least a dozen men from Pugmire's men's group at the Church of Jesus Christ of Latter-day Saints. He showed them how to lift Felt into the bed and gave specific instructions about charging her wheelchair and making sure her medication and water were in reach.

"We had no problem getting the men. As a matter of fact, we have a hard time scheduling everybody," he says.

Felt's sons still come over each morning to help her out of bed.

Pugmire cites the 1969 song, "He Ain't Heavy, He's My Brother," by the Hollies as inspiration.

"We're all here together, and we should help each other on the journey," he says. 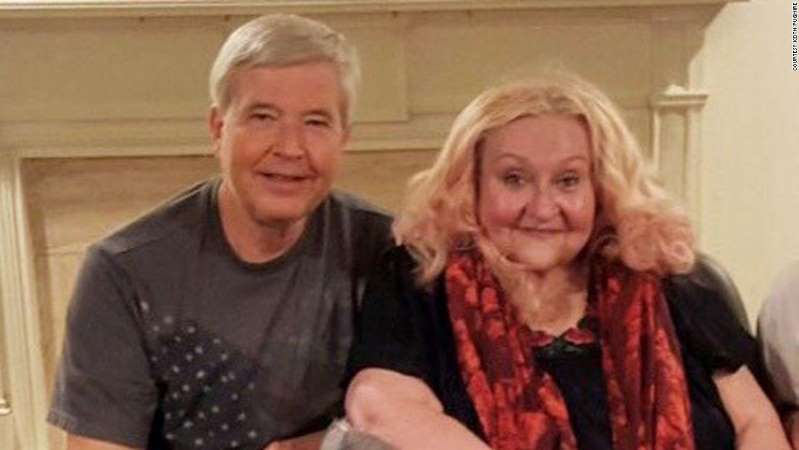