One long-lost U.S. Navy burial flag has been rightfully returned to its recipient’s widow after nearly being thrown away at a Denver storage facility.

Earlier this week, Peter Mikulin, who is also a Navy veteran, was shocked to find the American flag when his moving company was hired to clean out a storage facility, whose closure was ordered by the state, Fox 31 reports.

Inscribed on the back of the display case read the name of Chief Petty Officer Larry Rogers, who served in the Navy for 25 years and passed away in 2009.

Stunned that the patriotic treasure had been so disrespectfully misplaced, Mikulin was determined to find Rogers’ family to return the “priceless” memento, though he “didn’t have a lot of hope” that the attempt would prove successful.

“It's a disgrace. It's an insult," he told the outlet of the flag’s disappearance. "This belonged to a hero. A Chief Petty Officer.”

Through the help of Fox 31’s Problem Solvers, Mikulin was able to find Christine Rogers, Larry’s widow, who now lives in Brookings, Oregon.

When she recently relocated to the Beaver State, many of Christine’s belongings – including the flag – had been lost in transit. When Mikulin – a total stranger – contacted her on Oct. 12 with the news that her husband’s flag had been found, she was overwhelmed with emotion and appreciation.

"It means everything because it's absolutely the only thing I have of memorabilia of our life together and his military time," Christine told Fox 31. "I spent a whole day crying about [initially losing] it. It was devastating, but I had to tell myself you just have to let it go."

“To hear that the flag is gonna make it back to me, means everything,” she added.

"My goal was to get it back to her because it's rightfully hers,” he added. “I'm just the poor schlub that found it. I wanted to do the right thing.” 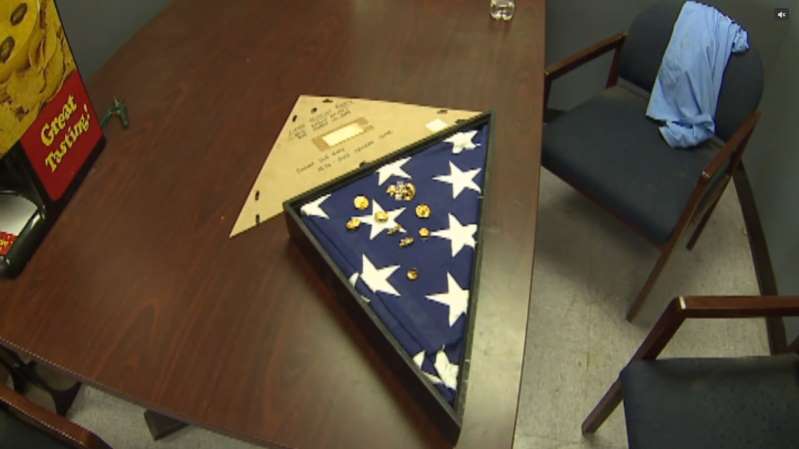