Longtime McDonald’s worker faced hardship. Then customers stepped in: ‘Wendall Needs Us To Serve Him Now.’

Wendall Gill has been wiping tables, stocking supplies and cleaning bathrooms at the same Lexington, Ky., McDonald’s for about 43 years — since before he and his wife adopted their two grandsons.

“Everybody knows me,” Gill said in an interview with The Washington Post. “I don’t have to wear a name tag or anything.”

Then, in August, tragedy struck. Della, his wife of 68 years, came by the restaurant to have a meal. In the bathroom, she had an aneurysm and died.

Now, at 85, Gill is deeply mourning his wife, taking care of his two grandchildren, who have special needs — and still working at McDonald’s several days a week to make ends meet.

Over the past few days, people keep walking up to him and handing him money. “I got $40 today,” he said Monday. “They know I need help right now. It really does help."

His customers began hearing about his hardship in recent weeks after an old friend and former co-worker, Todd Oldfield, came in for a breakfast sandwich and asked Gill how he was doing. Gill answered him honestly.

“He began telling me this story and he couldn’t go 30 seconds without his eyes welling up,” said Oldfield, 56, adding that Gill’s grandchildren were sitting at the next table waiting to be picked up for adult day care.

As Gill’s story came tumbling out, Oldfield said it was the first time he’d seen Gill anything but upbeat.

“By the time he was done, I was torn up,” said Oldfield, who decided then he needed to do something to help.

Oldfield, who worked at McDonald’s as a teenager, is now a financial adviser. Two weeks ago, Oldfield set up a GoFundMe with the headline “Wendall Needs Us To Serve Him Now!”

He figured maybe he could raise enough money so Gill could spend more time with his grandsons — both of whom he and his wife adopted as babies when their own parents couldn’t care for them. The older one, John Columbia, 33, has autism, and the younger one, Justin Gill, 20, has physical and mental effects from fetal alcohol syndrome.

Gill welcomed the help, saying that he missed his wife terribly and that it was a challenge to feel so sad and also work and take care of the boys.

“They say you get over things, but when I think of her, I start crying," Gill said. "I don’t think I’ll ever get over that.”

He added: “He is so hurt. If you drop by McDonald’s, and see him there . . . say hello. Tell him how sorry you are for his loss, and how much you love him and how much you pray for his strength, and peace.”

Hundreds of customers and others in the community started donating, saying how much they have appreciated Gill’s friendliness and good nature over the years.

GoFundMe donor Stephanie Baker wrote: “We used to go to McDonald’s as children and still talk about Wendall to this day. Such a sweet soul. We hope he gets these funds and that they truly make a difference in his life, even just momentarily.”

Carmen Covert wrote: “I care about my community and Wendall is the heart of Lexington!”

Gill was already known to many in Lexington for his work at the restaurant, in part because in 2016 the local paper, the Herald-Leader, wrote a feature about his affable nature and work ethic. “He’s a neat man who keeps a neat restaurant,” reads the story.

Wendall and Della Gill met when they were teenagers and lived on nearby farms where they grew up. When they decided to give up the farm life after they had five children, they both went to work for McDonald’s. Della Gill left the job about 20 years ago.

“She worked in drive-through,” Wendall Gill said. “They said she was the best drive-through person they ever had.”

On the GoFundMe page, Oldfield wrote that Gill is in debt. Gill and his wife had overextended themselves and bought a new Jeep Cherokee for her last year to take their grandchildren to doctor’s appointments and other activities. They also owed money on a 2014 Chrysler van.

Gill’s granddaughter Bethany Gill, 25, said she thought her grandparents were talked into purchases they couldn’t afford by aggressive salespeople.

“I don’t think they really got it,” she said. “I think they got taken advantage of.”

The payments on the Jeep, coupled with payments on their van, were $1,200 a month, more than double Wendall Gill’s McDonald’s salary. He supplements his income with Social Security and disability payments for the boys, but he still struggles to pay bills, especially now that the family no longer gets his wife’s Social Security check, he said.

“His van payment alone is what he makes at McDonald’s,” Oldfield said, adding that Gill was in over his head.

More local people started learning about his situation last week, when the Herald-Leader published a story about Gill and his late wife, their adopted sons and his work at McDonald’s. Some of Gill’s children were not in a position to help financially, but the ones who were got together and paid for their mother’s casket and funeral.

In the past 12 days, the GoFundMe has raised more than $32,000 for Gill’s expenses, which is in addition to whatever his customers have given him. He now has enough money to pay off the van, and family members persuaded Gill to return his wife’s Jeep to the dealership, though he still owes more money on the car than it’s worth, his granddaughter said. The dealership plans to auction the car, and Gill will owe the remainder, she said.

Wendall Gill’s story has inspired two people, in particular, to open their hearts and wallets in a big way: One has offered to buy a headstone for Della Gill, which Gill said he could not afford. The other family has offered to sponsor Christmas for Gill and his boys.

“I love them for doing something like that for me,” he said. “They really care, and I care, too.”

Oldfield said he has been taken aback at how generous people have been.

“As we get older, the world taints us a bit. I’d lost a little faith in humanity until this came along,” he said. “I can’t believe the good nature of people. It’s been kind of amazing.” 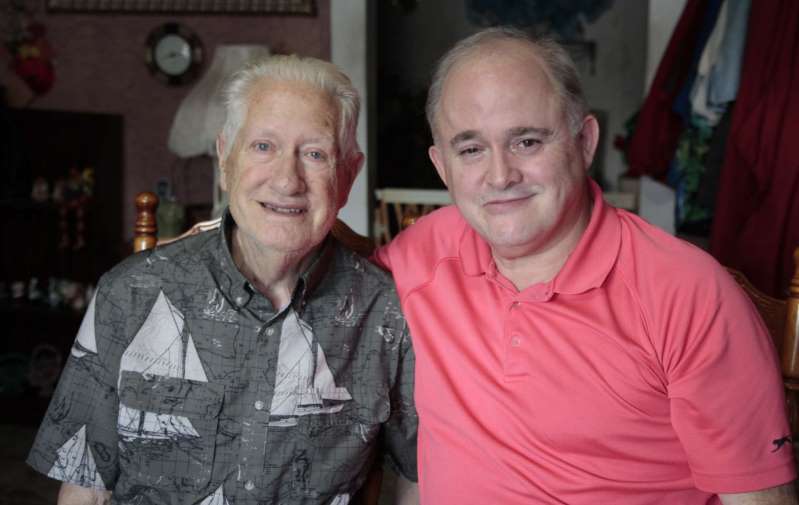