Little girl with autism mistakes bride for Cinderella. That's not the end to the fairy tale

Layla Lester loves to play princesses. In fact, nothing delights the 5-year-old more. So imagine the joy when Layla, who is autistic, saw one of her favorite characters come to life.

"I just heard Layla run away from me screaming, 'Cinderella! Cinderella!" said Jessica, Layla's mom. "She definitely believed it was Cinderella."

Jessica said the woman her daughter now believes to be Cinderella is actually a heavy equipment operator from western New York named Olivia Spark. Layla came to this conclusion after spotting Olivia at Akron Falls Park on her wedding day. Layla made a bee-line.

"I'm like, 'Layla, don't bother them. They're in the middle of a photo shoot,'" Jessica said, adding she's used to chasing Layla around.

But Olivia not only welcomed Layla. She also played along.

"I was more than happy to be Cinderella for that little girl," she said.

She talked to Layla for quite a while before finally telling her she had to get back to the ball. But that's not the end to the fairy tale.

Since their chance meeting, Cinderella has stayed in touch with her little princess charming, making Layla the happiest royal subject in the kingdom.

CBS News was there when Olivia came over in her wedding dress. But they see each other all the time now.

"It's an instant bond. They love each other. It's cute," Jessica said.

Jessica says normally Layla won't even talk to strangers, but she has clearly made an exception for Cinderella, who as it turns out, also has a little bit of fairy godmother in her. Olivia and her family started a GoFundMe to send Layla to meet more princesses at Disney World.

"She's the epitome of a true princess. She's kind. She's sweet. She went out of her way to make Layla's day special, and who would do that other than a princess?" said Jessica.

I guess they don't all wear glass slippers.
Get breaking news and in-depth coverage at Daily News 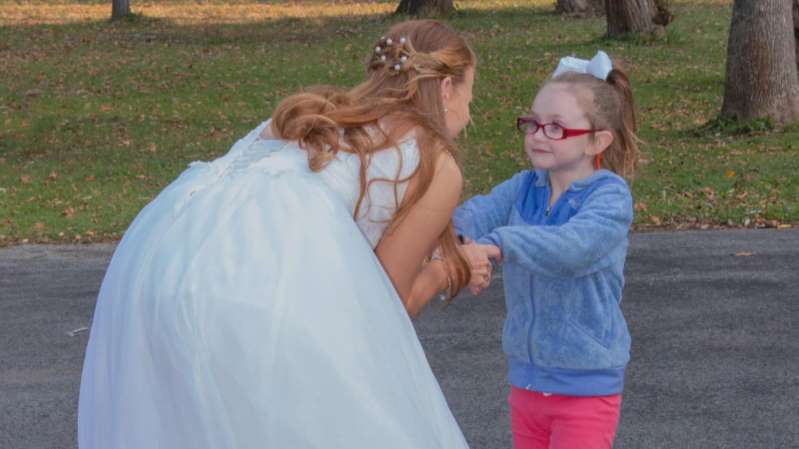