Terry Hill strongly believes that people with physical handicaps who have secured a placard to park in designated spaces, shouldn't have to face the additional challenge of not being able to find an open spot because drivers who don't belong have occupied them.

That's why the Oak Brook, Ill., Police Department community service officer plans to continue writing tickets only to those parked in handicapped-accessible spaces without placards, but also to those who are using someone else's credential.

Hill's favorite place to write such tickets is a Costco store, which has 17 designated spaces reserved for handicapped drivers in a parking lot that often is full or nearly so.

Signs warn drivers of a $250 fine, which is assessed for parking in a designated handicapped-accessible space without a placard, and Hill wrote 45 such citations from July 14 to Oct. 15.

But what signs don't warn drivers about is that if they park in the spaces using placards issued to other people, they may get tickets with a $600 fine attached. Hill wrote 44 tickets in the July to October period for that offense.

"It actually started in July when I saw someone speed at the mall into a handicapped parking space," Hill said. "I can tell by looking at a box on the placard if it was issued to a male or female, so that's a pretty good clue if I see a woman get out of a car and see that the placard was issued to a man, or the other way around."

Hill often will run the vehicle and placard information on the computer in his police vehicle and wait for the driver to return if it looks like they are using a placard illegally.

Deputy Chief Jason Kates said writing tickets for such violations has become a niche for Hill. During the July 14 to Oct. 15 period, no other officers wrote tickets for using someone else's placard; eight tickets were written by other officers to parking without placards.

"About three-quarters of the tickets I have issued for that have been at Costco because the parking lot there is always crowded, and people have gotten away with it for so long," Hill said. "People generally aren't inside of Costco, either, for as long as they may be at the mall, so it works better for me to wait for them to come out of Costco."

Hill said the first communication he has is to ask if the placard belongs to them.

"Ninety-nine percent of the time, they say it's theirs," he said. "I always ask more than once to give them another chance, and if they say it belongs to a spouse, I ask if that person is with them."

Hill said he uses discretion in issuing the citations that carry a $600 fine and ends up writing tickets about 60 percent of the time.

"There are people using a placard that belongs to a spouse, but it's obvious they also should have one, like if they have difficulty walking," he said. "In cases like that, I'll usually tell them that I am not going to write them a ticket, but that they need to get their own placard."

Hill said people are usually shocked to find out a violation carries a $600 fine.

"It's a lot, but it should be," he said. "I've had a lot of people thank me for doing this."
Get breaking news and in-depth coverage at Daily News 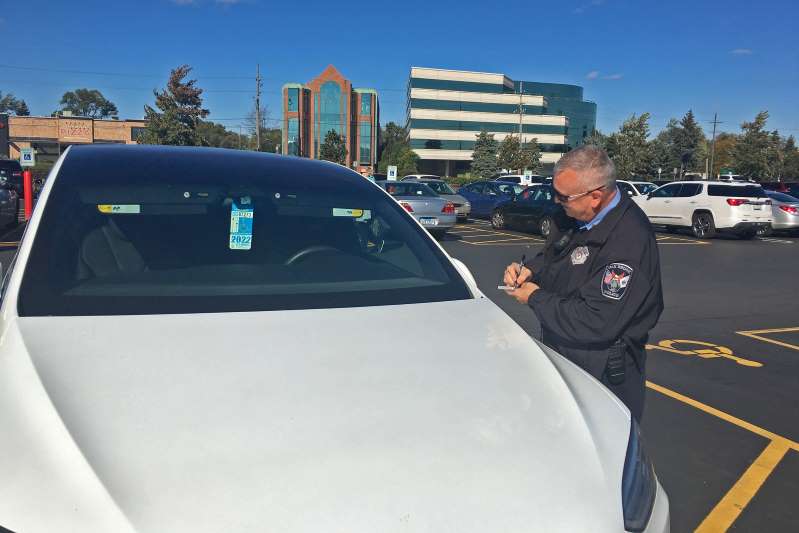