Homeless children often do not celebrate birthdays. This woman is changing that, one party at a time.

© Provided by WP Company LLC d/b/a The Washington Post Megs Yunn, left, with Nikkia Griffin, who has been staying at a shelter with ...

Megs Yunn was helping an 11-year-old named Beverly with her reading homework at an after-school club in Pittsburgh when the girl said something so shocking that it brought tears to Yunn’s eyes.

Yunn, who was director of volunteer programs at a local college at the time, was trying to explain to Beverly the meaning of the word “accustomed.” Yunn used it in a sentence, asking Beverly: “At birthday parties, people are accustomed to eating what?”

The girl, whose family struggled financially, was silent for a moment. “Miss Megs,” she said in a soft voice, “I’ve never had a birthday party or eaten a slice of birthday cake.”

Yunn later told The Washington Post that it had never occurred to her before that some kids do not have birthday parties.

“I was stunned — it knocked the wind out of me,” said the 33-year-old mother of four.

Yunn sobbed in her car on the drive home thinking about the parties she had thrown for her children and her own birthday parties as a child. Then Yunn decided she needed to do something for Beverly and other children living in poverty or in shelters who have never felt the excitement and joy of a birthday party.

An estimated 2.5 million children are homeless in America, amounting to about one in every 30 children. In Pennsylvania, the public school system offers assistance to about 13,000 homeless children a year. Across the state in 2015, an estimated 39 percent of children were from low-income families.

When Yunn learned that an insurance company was sponsoring a contest for people who wanted to make a difference in their communities, she came up with the idea of Beverly’s Birthdays — a nonprofit organization that would partner with local businesses, schools and social services agencies to throw parties for children in need. She won first place and $2,500, which she used to buy birthday gifts, cake mixes and decorations to get a start.

Since that day in February 2012, Beverly’s Birthdays has brought birthday fun to more than 30,000 children in the Pittsburgh area who are poor or homeless. Yunn has a dedicated and growing group of more than 200 volunteers.

“When you strip away the birthday aspect, this is about letting children and their parents know they matter,” said Yunn, who left her job to run the charity, which is funded through donations and grants.

In addition to hosting parties, Beverly’s Birthdays provides “birthday in a bag” kits for families that would like to bake their own cakes, as well as classroom supplies so teachers can recognize students on their big day. Yunn also recently launched the “Birthday Boutique” — a renovated bread truck where the birthday kids and their friends can “shop” for new outfits, pajamas, shoes, accessories and more. All free.

“Megs and her team have made a world of difference for the children we serve in our shelter,” said Danielle Hunt, associate director of Pittsburgh’s Womanspace East, which offers housing and resources for people who are homeless or close to homeless.

Hunt said that during Yunn’s parties, for those few hours, parents are able to forget about their troubles and just focus on their kids and the excitement.

Nikkia Griffin knows that feeling. The single mother has been living with her three kids, ages 1 to 5, at a Pittsburgh shelter for more than a month after staying with a family member didn’t work out.

“Helping kids on their birthdays is so thoughtful, it makes it a wonderful day for everyone,” said Griffin, 27. “My 1-year-old daughter loved going on the birthday bus so we could pick out some princess pajamas.”

Griffin’s boys went “shopping” for pajamas, too, selecting pairs covered with basketballs and footballs. “Everyone really appreciates that somebody is thinking about making things special for our kids,” she said.

Yunn has seen the effect of her work on people’s lives, even things as simple as a decorative bag filled with small toys, toothpaste, socks and crayons. “It doesn’t take much,” she said.

She recalled a 15-year-old girl named Kayla who was about to have a birthday and confided in a volunteer that she had never owned a dress before, Yunn said.

The girl’s comment hit him emotionally, “and he arranged for Kayla’s [social services] caseworker to buy her two new dresses and some shoes,” Yunn said.

After that interaction, Yunn said, the girl became less guarded.

“She was open to the therapy that she needed, it was like she became a new person,” Yunn recalled. “Letting her know that she was important and mattered made all the difference.”

Yunn applies that same idea to a birthday program she started for expectant mothers called “Itty Bitty Birthday Cheer.” Single mothers who are living in shelters without family support are often anxious about their pregnancies and worried about how they will provide for their children, she said.

“So we host baby showers for them and make sure they’ll have everything they need for the day the baby is born,” Yunn said.

Several single dads have benefited from Beverly’s Birthdays, as well. One young father came aboard her boutique bus one night to pick up an outfit for his daughter’s third birthday. Yunn helped him to select a sparkly unicorn sweater with matching pants and a pink-and-purple-striped tunic with leggings. “There’s no way to describe it except utter joy,” she said of the father.

She often wonders what happens to the children who fleetingly enter her life. One year after she started Beverly’s Birthdays, Yunn sent a letter to the girl who inspired it all.

“I sent it to her school with a birthday basket, just to thank her and tell her that her honesty inspired me to help other children to have happy celebrations,” Yunn said. “She remembered the conversation and thought it was neat that we’ve helped thousands of other ‘Beverlys’ since then.”

More than anything, Yunn feels happy when she sees homeless families move into apartments of their own and gain some stability in their lives. “We take them a ‘birthday in a bag,’ and they’ll make their own cake and have their own little celebration,” she said.

The words of one 9-year-old girl who was helping her mom blend cake batter have stuck with Yunn. 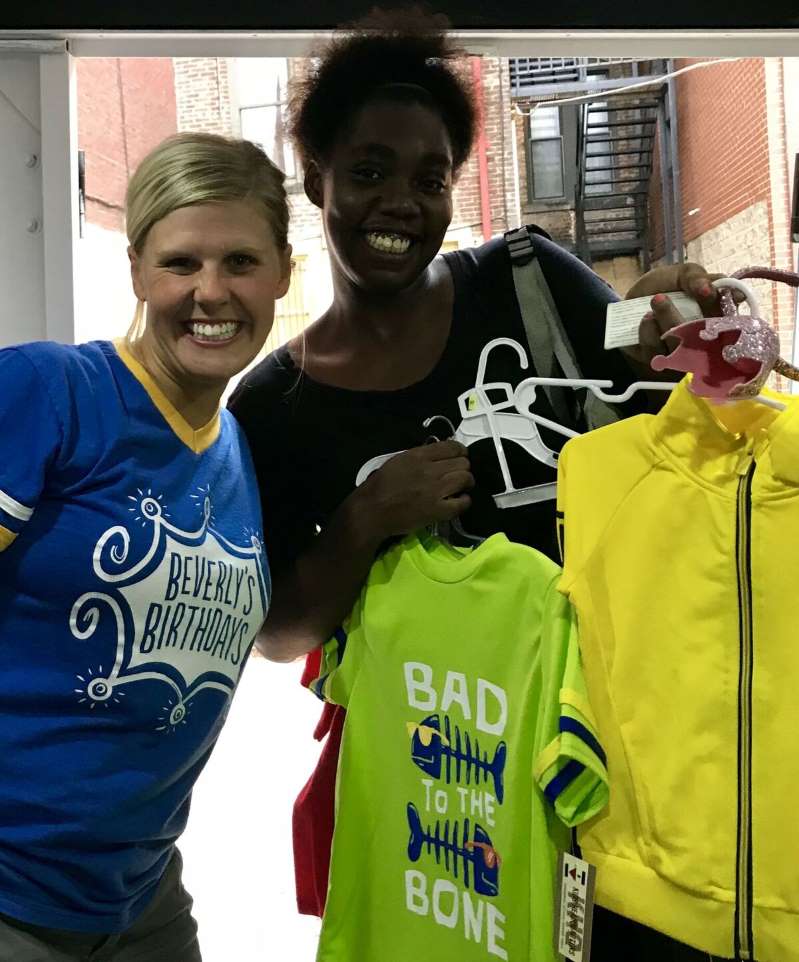