By Deborah Hastings, Inside Edition In these incredibly divisive times, a single photograph has united more than 1 million people ... 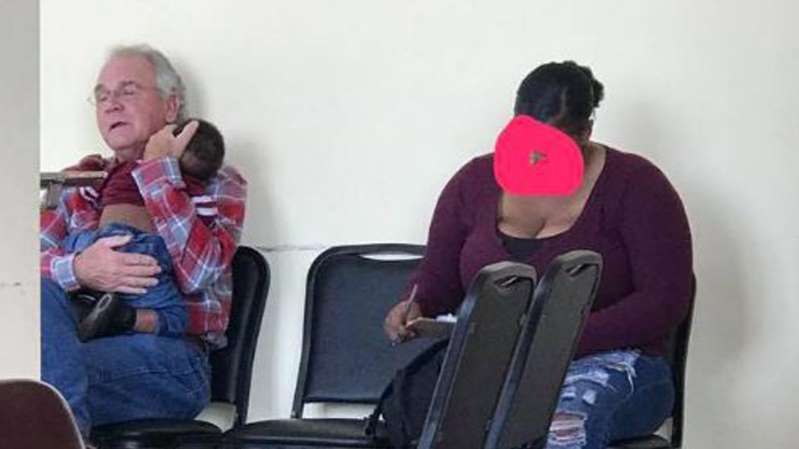 In these incredibly divisive times, a single photograph has united more than 1 million people around the globe.

Natasha Crittenden Wilson was sitting in a Alabama doctor's waiting room when a mother walked in with a sleeping baby on her shoulder. She stepped to the reception desk, checked in, and was handed a clipboard with a stack of forms to fill out.

"She goes to sit down, and you could just hear thinking, 'Now how am I going to do this?''' Wilson told InsideEdition.com Friday. Just then, from across the room, an elderly man piped up, "Could I hold that baby for you?" And the mother, beaming, replied "Yes, that would be amazing." Wilson recalled.

The man cradled that baby as if he was his own. His mother, unencumbered her, turned her attention to the paperwork.

Wilson took a cellphone photo of the moment and posted it to her Facebook page, where it blew up social media.

The elderly man is white. The mother and her 1-year-old are black.

"Racism is still very real in our society, but this man has provided me with hope & a sweet memory that I will never forget . If you know this man, tell him what an extraordinary person he is!" Wilson wrote alongside the photo.

"It's all very surreal," Wilson said. It's very heartwarming to know that people all over the world want the same thing."

Wilson has seven biracial children with her partner. "I see both sides of everything. It's just not very often that you see compassion for a complete stranger, and especially across races."

The gentleman, who has contacted Wilson since the photo went viral, told her, "That's just who I am. I've never thought about race or color. All the children I know call me Papa Joe," he told Wilson over the phone. In the background, Wilson said, she heard his wife shout, "We call him the 'Child Magnet.'''

Wilson obscured the woman's face in the photograph to protect her from online trolls, she said. "I know how people are and I didn't want her ridiculed for handing her child to a stranger."

There were a few snarky comments to Wilson's post. But positive ones were the overwhelming majority.

"He just rocked that baby and held on to it," she said of the man. "He just kind of put his head down and tried to get (the baby) to keep sleeping."

Wilson takes no credit for posting the photo. "I'm just a small-town girl with a big mouth," she said. "It has nothing to do with me. It's God's way of saying, 'People we can really love each other.' It just takes each one of us to teach our children there is no color, there is no hate."
Get breaking news and in-depth coverage at Daily News