USA TODAY An 8-year-old girl who heroically pulled an ancient Viking sword from a lake in Sweden, will likely receive her very own han... 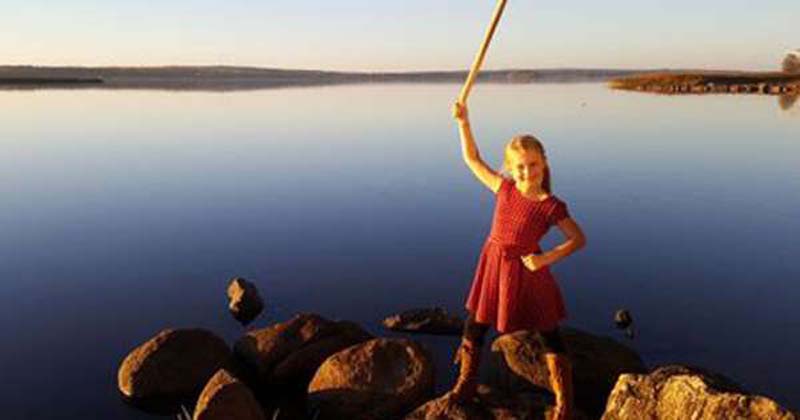 An 8-year-old girl who heroically pulled an ancient Viking sword from a lake in Sweden, will likely receive her very own handmade version of the weapon to remember the fateful day she become a "queen."

Saga Vanecek discovered a wood and metal sword, estimated to be 1,500 years old, while searching for rocks near her family's summer cabin in southern Sweden over the summer. When she found the 33-inch-long relic, she wielded it into the air and yelled "Daddy, I found a sword!" she told USA TODAY.

It was a magical day that months later, launched the girl into worldwide celebrity status. People have called her the "Queen of Sweden" and "Queen of the North," her father Andrew Vanecek said, who notes his daughter hasn't yet received an invitation to Sweden's royal palace but would welcome one.

After experts at the Jonkopings Lans Museum declared the discovery earlier this month, Saga said her school at least gave her the royal treatment by throwing a party for her and her classmates.

"We even got ice cream and balloons," Saga said.

As for fans elsewhere: A T-shirt company based in Scotland created a design inspired by Saga, and sent her a shirt that many of her teachers have also purchased. The Minnesota Vikings, Saga's favorite football team, have also been in touch, featuring the young girl in a story on the Viking's website and promised they'd send her a gift.

Saga's fame prompted her father to create a fundraising page in hopes that he could purchase a replica sword for his daughter. As of Monday at noon, the page had raised more than $8,900, which is close to what he said it will take to buy a similar handmade design. He's also hoping donor money will help with costs associated with turning Saga's story in to a children's book.

Saga's story has "inspired so many children to explore," he said, that he thinks a book makes sense.
Get breaking news and in-depth coverage at Daily News