© Jerry Davich/Post-Tribune/TNS Melvin and Randy Berlin, both 89, outside the old Lake County Courthouse in Crown Point, where they ...

Melvin and Randy Berlin ambled across a busy Main Street to once again stand in the shadow of the old Lake County (Ind.) Courthouse.

"We thought that Crown Point, Indiana, might like to know what happened to us," Randy said as she held onto her husband's arm.

It had been 70 years since the couple last made a fateful trek to the courthouse on the Crown Point square, which at that time was an around-the-clock "marriage mill." Back then, wedding chapels on the square operated 24 hours a day, with no waiting restrictions on blood tests for eager couples.

These newlyweds included celebrities such as Rudolph Valentino, Joe DiMaggio, Red Grange and Muhammad Ali. In its heyday, the courthouse was staffed by rotating justices of the peace, including Harvey Minas, known for performing unusual wedding ceremonies.

On Aug. 23, 1948, he presided over the unusually everlasting marriage of Melvin and Randy Berlin, who eloped from their parents' Chicago homes. The 19-year-old sweethearts drove Melvin's father's car, though they didn't tell a soul why they needed it or where they were going.

"We were just kids, but we really loved each other," said Randy, 89. "Back then, you weren't supposed to consummate your love before marriage. And everybody knew you could get married in Crown Point, Indiana."

They were both born and raised in Chicago, attending Von Steuben High School.

"We knew each other casually, not romantically," Randy said. "But I thought he showed promise."

After graduating, they both attended the University of Illinois in Champaign, where they met again on a train ride home to Chicago. They talked mostly about American history before writing their own history, beginning that day.

"It seemed like everybody else faded away and it was just the two of us talking on that train," Randy said. "Oh, the talking we did that day."

They've been talking ever since, on trains and planes, in boardrooms and bedrooms, and at swanky nightclubs and ritzy high-rises.

The next day after the train ride, Melvin called Randy on the phone as he promised. They soon became an item.

"My parents loved Melvin more than they loved me," Randy joked.

Melvin could only smile at the dusty memory.

On Nov. 14, 1948, the couple celebrated their marriage with their families, friends and a public announcement. The next day, they took another long train ride to Colorado Springs for their honeymoon.

Neither of them finished college at the University of Illinois. Much grander accolades awaited them.

Melvin, who had highly intuitive business savvy, started a company with only a $1,000 investment. It transformed, among other successful endeavors, into Berlin Packaging and Berlin Metals, located in Hammond, a multimillion-dollar firm.

Melvin and Randy have three sons who, like their parents, are successful professionals, with two of them still involved in the family businesses.

In 2014, the trade publication American Metals Market named Berlin Metals the best service center in the nation. This year, it sold for an undisclosed sum to Olympic Steel, handsomely rewarding the Berlins after decades of planning and working.

"We enjoy our life," Randy said.

After Melvin's business started paying financial rewards, he supported Randy's longtime dream of returning to college. Since adolescence, she fancied becoming a student at the University of Chicago.

"Back then, it wasn't important for a girl to get a secondary education," she said. "But it was to me."

In 1991, she earned a law degree from Loyola University Chicago Law School, concentrating her studies on employment and labor law. She used her expertise as a board member and legal adviser for Berlin Packaging, headquartered in Chicago.

Randy began teaching Law and Literature, a course she created, at Loyola Law School and the University of Chicago Law School, a teenage dream that became a reality in her 60s. She also created and developed the nationwide Junior Great Books Discussion Program, involving thousands of schools in the country.

"I've always had an interest in the great books of English literature," she said.

Randy and Melvin, who have eight grandchildren and three great-grandchildren, have since become well-known philanthropists in Chicago and beyond.

They gave $3 million to their beloved University of Chicago. They've also supported the Chicago Symphony Orchestra, the Lyric Opera of Chicago, Lake Forest College and other educational and philanthropic organizations. In 2008, they gave $500,000 to Loyola University's law school.

"We did all of this together, as we have done everything since we got married," Randy said.
Get breaking news and in-depth coverage at Daily News 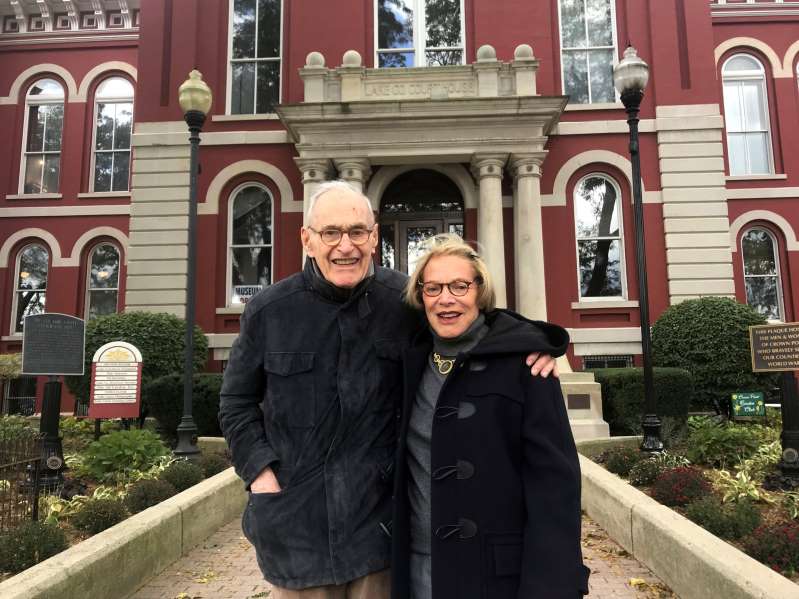