By Erin Tracy , The Modesto Bee Modesto resident Chanda Benson had been yelling for help as she clung to her dog Gunther in the frigid ... 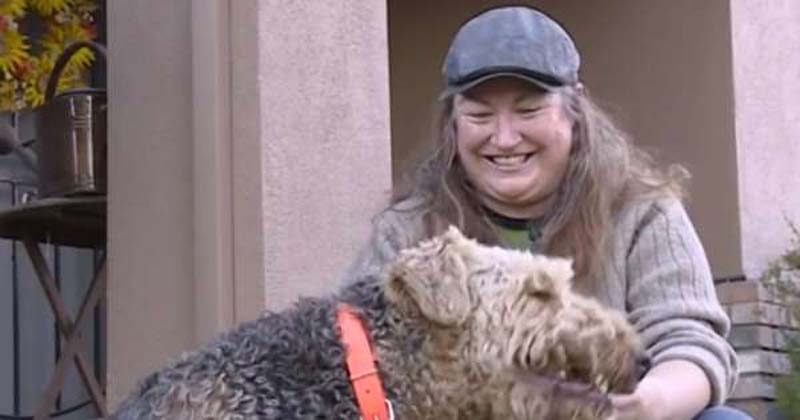 By Erin Tracy, The Modesto Bee

Modesto resident Chanda Benson had been yelling for help as she clung to her dog Gunther in the frigid Stanislaus River for nearly 10 minutes Wednesday evening, her extremities going numb, when she began to panic.

She hadn't seen another soul at the Army Corps Park in Ripon since she and Gunther arrived 20 minutes prior. She had begun throwing a stick in the river for Gunther like she had done dozens of times over the years.

The last time she threw the stick, Gunther, a 7-year-old Airedale, got caught by the current and swept downstream. Benson jumped in after him.

The Stanislaus River was flowing at more than 700 cubic feet per second and was about 55 degrees Wednesday evening, according to data from the California Department of Water Resources.

Benson said she caught up with Gunther and they continued on for about 500 feet until she was able to grab hold of an overhanging limb from a partially submerged tree near the edge of the river.

Benson said there was no shore, just a slippery, muddy, steep embankment about seven feet high, and she couldn't get up it.

"So I started calling out for help; I was just howling," she said.

Finally, she heard a man's voice return her calls. He told her to keep talking so he could find her.

A man she later learned is named Gerardo Hernandez, also of Modesto, appeared at the top of the embankment.

He told The Bee Thursday that he had been wearing headphones and at first only heard a faint noise.

When he reached her, "A million things went through my head," Hernandez said. "'Should I jump in there? No, I shouldn't jump in there, then I will be stuck too.' I went and found the biggest branch I could."

He lowered the branch down to Benson, and she used it to climb up the embankment as Hernandez pulled.

Then Hernandez held onto Benson's feet as she lowered her upper body far enough to reach Gunther, who was perched on the tree's roots.

Cold and wet but safely on shore, Benson said, she thanked Hernandez profusely. She took a picture with him and the two parted.

Reflecting on the event Thursday, Benson said she wanted to give credit to the young man who she says is a "brave hero."
Get breaking news and in-depth coverage at Daily News