GRAND LEDGE, Mich. – Customers have given waitress Jesika Price good tips for service in the past, but nothing compares to a recent check from a patron.

Price, 19, has worked full time at the A&W restaurant in Grand Ledge since March 2017.

“I absolutely love my job. I know every one of my customers when they come through the door,” she said.

It’s a place with a slower pace. Waitresses don’t just deliver the meals and coffee, they offer light conversation and trade barbs with the customers.

Price, sporting an orange baseball cap with a bouncy ponytail, said she often slides into the booths or sits at the tables to chat with regulars.

“I like the life advice and the stories they give me,” she said.

"She's delightful, and she's always smiling, she's a beautiful soul," said John Goodman of DeWitt on Friday, Oct. 12, 2018, while chatting with Grand Ledge A&W waitress Jesika Price of Grand Ledge. Recently Jesika was tipped $500 by a regular who wishes not to be named, to help her on her pathway through school. (Photo: Matthew Dae Smith/Lansing State Journal)

Though she’s upbeat and positive on the job, she’s had a lot of upheavals in her young life. She never earned her high school diploma and wants to change that.

One regular customer, a retired educator who grew up in the restaurant business, was touched by her story.

Price already knew him as a good tipper — $5 tip for a simple $8 breakfast of toast, hash browns with onions and extra butter. He also gave her $10 to tuck away for her education each time he visited.

In late summer, he dropped by the restaurant and asked Price to spell her name.

Then he wrote out a check.

At first Price thought it said $5. She thanked him enthusiastically.

She shrieked and ran to tell Mark Mulder, a co-owner of the restaurant. He advised her to view it as a gift from God and pay it forward some time in the future. She said she hopes to.

The big tipper didn’t want to be identified by name because he didn’t do it for glory – and he doesn’t want people asking him for money.

“We’re not living in a real good world at this time. I’m trying to make it a better world, my way,” he said.

At the age of 2, Price was adopted into a family that eventually had 11 children, eight of them adopted. She said the court prohibited contact with her birth family, but she reconnected with them when she turned 18. Her adopted, half- and step-siblings number 15.

She left Grand Ledge High School in 9th grade. Price said she struggled with sadness after the deaths of her grandfather and uncle, and “it went downhill from there.” More recently, there have been two suicides in her family.

She left home for a while, living with her high school boyfriend’s family. His mom, Tammie Partridge, is a longtime cook at the A&W.

She helped Price get a job at the restaurant. Though Price split up with the boyfriend, she is still close to Partridge.

“I love Jesika to pieces. She’s like my kid,” Partridge said.

Price doesn’t view herself as a high school dropout.

After she left Grand Ledge High School, she was home schooled for a time then attended an alternative high school with an online curriculum. But graduation was looking like it would be in 2019. She'd be 20. That seemed too far off.

She’s now living with her family in Grand Ledge and studying for her GED, a high school equivalency credential and a gateway to college.

She wants to go to college to become a nurse and work in a neonatal unit.

Price and her best friend are looking for an apartment with plans to attend Lansing Community College.

Until the big check, Price said, she’d been struggling to pay her bills with enough left over to build a college fund.

"That $500 will help me insanely. I was not even going to go to college until I had money saved. I was going to wait a couple more years," she said.

Now she's hoping to start in the spring.

Fellow waitress Katie Stegenga said she was a bit jealous when she heard about the $500, but quickly overcame that when she got the full story that it was to pay for classes.

She said she views Price like a little sister.

“It couldn’t happen to a nicer person,” she said. “She’s got a big heart.”
Get breaking news and in-depth coverage at Daily News 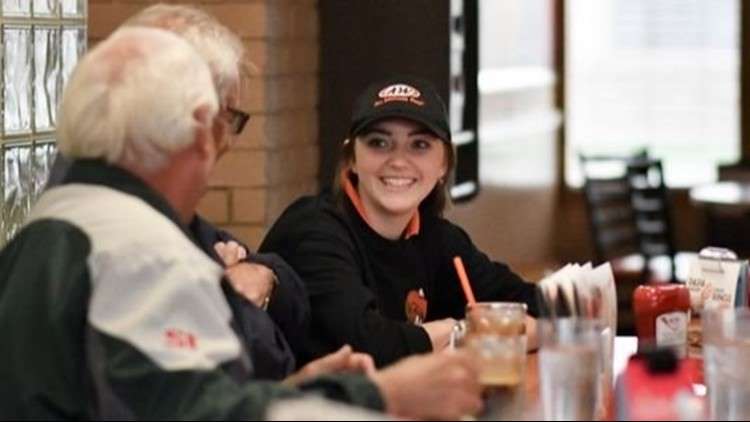