After being called the N-word at school, this 12-year-old is taking a stand

© JOHN WALKER/Fresno Bee/TNS Tarrick Walker, 12, with his parents Marcel and Darlene Walker are making a stand against bullying aft...


Tarrick Walker was playing basketball with friends when he heard a racial slur.

The word rose up from a huddle of seventh-graders on a basketball court at Kings River-Hardwick School in Hanford.

"I walk in and say, 'What's happening?' " 12-year-old Tarrick recalled, "and then he told me to 'Get out you dumb N-word.' And that really made me feel a little discouraged and it hurt my feelings."

The definition of this slang, "a contemptuous term used to refer to a black person," is extremely disparaging and offensive. Tarrick and his parents don't say the word when talking about what happened.

Tarrick was shocked. So were his friends.

He talked about the incident in a video he posted on Facebook.

"What really made me feel good was that my friends and other kids on the basketball courts stood up for me and told him to stop saying what he did," Tarrick said in his video. "And, that made me think about how lucky I was, to have such great friends and classmates. But not everyone has the same support I do, and that encouraged me to take a stand, to stand up for kids that are being bullied and to let parents know to tell your kids about what bullying and racism is, and how it's not cool."

It's unclear how the incident began.

Tarrick was bullied last month on a Wednesday. By the following Monday, Tarrick and his parents were passing out free "stop bullying" T-shirts at Tarrick's school that they printed up. They gave away 100, and more than 200 others were ordered. The shirts have been a hit at Tarrick's school and were mailed as far away as Missouri and Texas. Wristbands were made with the same message.

Cathlene Anderson, superintendent of Kings River-Hardwick Elementary School District, is proud of Tarrick. She said "tearing others down with words and/or actions is not acceptable and will not be tolerated."

"Tarrick's current anti-bullying awareness efforts are proof that KRH children are stepping up as leaders to put positive ideals into action and spread love, acceptance, and compassion to others," Anderson said.

The stop-bullying shirts and wristbands include a hashtag, #IStandWithTarrick "because it's not about Tarrick's incident - it's about the stance that Tarrick is taking," said his father, Marcel Walker.

Walker is owner and chief executive officer of a personal training and group fitness studio in Hanford. He's a tall, strong man who formerly served in the Navy, but the strength is not just physical. He taught his children not to stoop to a bully's level.

Walker, who is black, grew up in Texas regularly hearing racial slurs and the N-word levied at him. He warned his children that they would someday experience racism, too.

"But I wanted them to be able to be prepared for when it happened, and then educated on what to do and how to handle it," Walker said. "And my kids, and Tarrick in this incident, handled it exceptionally well."

Tarrick reported the bullying to school staff, then went to work with his parents to change the culture for the better, through education.

"A lot of people can act negative when something like that happens," Walker said. "People can get irate - and of course we were upset; I was upset - but I could go out and start being negative to everybody or I could be positive. So we used this experience to spread more positivity."

Walker designed the stop-bullying shirts. They were printed on blue fabric - the official color for National Bullying Prevention Month, in October - with the image of children's handprints and a splotch of electric green, a vibrant "feel-good color," Walker said.

A leadership club at Kings River-Hardwick School is now leading a month-long campaign "to remind students that building others up with their words and actions is what true leaders seek to accomplish on a daily basis," Anderson said.

Walker defined bullying further: "When you make someone feel uncomfortable, or you have an intention to do something that's nonviolent ... with the intentions of making someone feel bad, that's bullying."

The Walkers say it's important to talk about how bullying happens, not just that it's bad.

"A lot of times kids will think, 'Oh, don't fight,' or something like that, like that's what bullying is. ... It's important to talk with kids more in depth I think about that and start at a younger age," Darlene Walker said. "We have a 5-year-old and we already talked to her about going and being friends with people who you see that are by themselves or don't have somebody to play with, and being a good friend."

Tarrick has been receiving a lot of support from his community. Recently, he talked about his experience during a sermon at his Hanford church. Many told Tarrick's parents that Tarrick came to their children's defense when they were being bullied.

"It was really nice to know there is a lot more love than there is hate," Darlene Walker said. "That made me feel better, knowing people were going to stick up for him."

The Walkers said it's crucial to talk about bullying with kids while they're still young.

"If we as adults can teach our kids that bullying is not useful today or ever," Marcel Walker said, "and then teach them types of bullying, we can literally eradicate the hate and the pushing around of adults in the future."

And parents need to be more proactive, Marcel Walker said. If a child sees something inappropriate on television or while playing video games, for example, "it's the parents obligation to stop them right there and say, 'Hey, do you know what he just said?' Or 'Do you know what he or she just did? That is not acceptable, and do you know why?' "

The Walkers believe a kinder world is also a safer one.

"A lot of the times, the school shootings - that's not a good thing - happen with kids who have been bullied," Tarrick said. "A lot of really disturbing stuff happens with kids getting bullied and taking it the wrong way."

Tarrick ended his Facebook video about what happened with a message of gratitude:

"Thank you all for your support. Many more kids will need it."

A "Stop Bullying, #IStandWithTarrick" T-shirt can be purchased for $12 by sending a direct message to Marcel Walker on his Facebook page, or by emailing him at sweatunlimited@gmail.com. 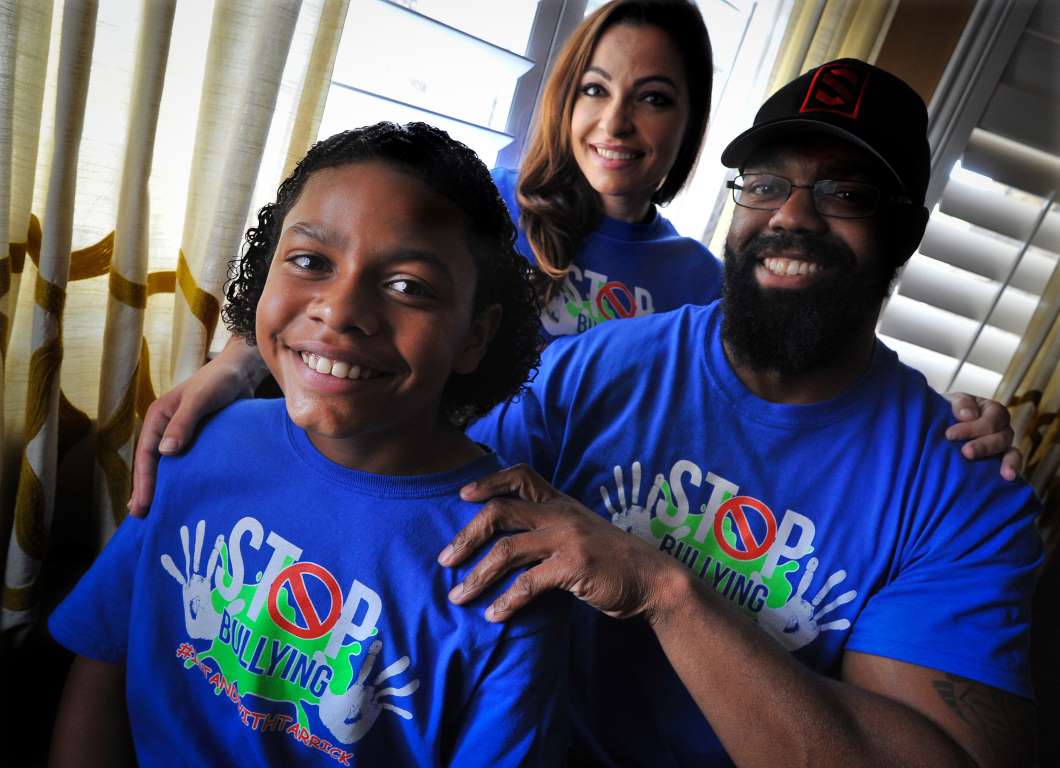