Wildlife rehabilitators in Wisconsin on Thursday worked to untangle the tails of five young squirrels after they became "hopelessly entangled" in their nest.

The "Tale of Five Tails," as the Wisconsin Humane Society's (WHS) wildlife rehab program dubbed it, started when someone spotted the juvenile grey squirrels and reached out for help.

Their tails had become entwined with "long-stemmed grasses and strips of plastic their mother used as nest material," the Wildlife Rehabilitation Center wrote on Facebook.

Rehabbers anesthetized the squirrels and carefully worked to detangle the little tails — a puzzle the Humane Society jokingly described as a "Gordian Knot."

"It was impossible to tell whose tail was whose, and we were increasingly concerned because all of them had suffered from varying degrees of tissue damage to their tails caused by circulatory impairment," the post read.

Eventually, they were able to cut away "at the grass-and-plastic knot with scissors, being very careful to make sure we weren't snipping anyone's tail in the process" in about 20 minutes' time.

The WHS said on Friday the squirrels were "bright-eyed" and three of the five critters were "bushy-tailed," while the other two seemed to have a little less fur. Rehabbers said they'll continue to monitor the squirrels to make sure their tails have sufficient bloodflow. 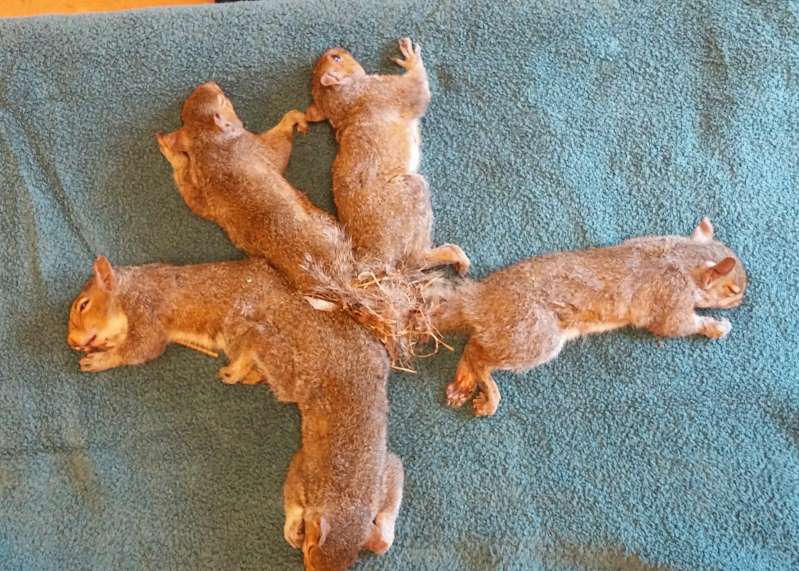