This school janitor has quietly been giving homeless students clothes, soap and more from her ‘giving closet’

© David Roy/ Carolyn Collins in her care closet, which is where she stores items that she gives to students in need. By Cathy...

High school custodian Carolyn Collins was about to take out the trash in the early morning darkness when she heard a loud knock on the cafeteria door.

She set down her garbage can and cracked the door. Two students — a boy and a girl — looked at her nervously. “Can we please come in?” asked the boy, even though school didn’t start for two more hours. “Me and my sister are getting tired of waiting outside.”

They said they’d been living in a car with their mother, who had dropped them off early so they could get ready for school in one of the restrooms. Collins felt her eyes fill with hot tears. The teens were hungry, so she hustled up some fruit, milk and cereal.

That was four years ago, the day she hatched a plan for a school “giving closet” — food, clothing, shoes, toothpaste, shampoo, deodorant and more — all free to any student at her school, Tucker High, about 25 miles from Atlanta.

“I knew that they weren’t the only kids at school who were struggling,” Collins, 54, told The Washington Post. “And I thought, ‘I’m going to do whatever I can to help these kids. High school is hard enough without being homeless.'”

Hours after she let in the homeless siblings, Collins stopped at several dollar stores after work on her six-mile drive home. She spent $200 on snacks, toiletries, socks, underwear, notebooks and pencils, and then stopped by the principal’s office the next morning to let administrators know she planned to help students in need and hoped they would provide her with some space.

Later that day, after she cleaned out an old storage room near the cafeteria, Collins’s giving closet was up and running.

Since 2014, any of the school’s 1,800 students who are in need of items such as food, soap, school supplies, book bags, clothes — even prom wear – will quietly mention it to Collins and she’ll open the closet. They can take what they need.

“She has such a giving heart, she’s a beacon of light for every kid in need,” said Eric Parker, 42, principal of Tucker High School.

The school has many students living in poverty, Parker said, with about 10 to 15 kids who are homeless at any given time.

“If a student needs something and it’s not in the closet, Ms. Collins will go out of her way to get it or find somebody else who can,” Parker said. “Her commitment to our kids is heartwarming. Whatever problem they might be having in their lives, they know they can trust her to listen and help.”

Between her duties of mopping, sweeping and polishing, Collins said she always makes time to stock the closet and reach out to students. She tries to help keep the kids afloat, she said, but there is also another, more painful reason.

Collins doesn’t like to talk about the terrible phone call that she and her husband received six years ago, one week before Thanksgiving. While visiting a friend, their grown son was in the wrong place at the wrong time and was killed during a home invasion robbery, she said. She misses him every single day.

“I want to give kids what they need so that nobody has to go out and steal from anyone,” said Collins, who has worked at the school for eight years. “I don’t want any other parent to have to go through what I did and lose a child at a young age for no reason.”

Collins estimates she has helped about 150 students through the giving closet, spending about a few hundred dollars each month. Many of the items are now donated by teachers, other students and people who live in the neighborhood.

“Gloves, shoes, belts, pants, sweatshirts, hairbrushes, whatever they need, I’ve got it,” she said.

She is always on the lookout for teens who come to school each day wearing the same clothes, shuffling through the halls with their heads down — a sign that they might be homeless or experiencing other stress. Discreetly, she’ll invite them to take a peek in her closet.

“I never anticipated it would get this big, lots of good people want to help,” Collins said. “Not every kid who comes to the closet is homeless — some come from single homes and don’t have dads in their lives. It’s hard not to have a dad at home, especially when you’re a young boy. I just hug them and love them and let them know that I’m here for them.”

Former students describe what a huge impact she’s had on them.

“I love her with all my heart, she was my angel,” said Kennedy Carroll, 21, a Tucker High graduate who is now a sophomore at Savannah State University, majoring in performing arts. When he and his mom became homeless and had to move in with a relative that Carroll didn’t get along with, he lived by himself in his mother’s car for several months until a classmate’s family took him in.

“Ms. Collins took me aside a couple of times and made sure that I was doing okay and asked me what I needed,” said Carroll. “And I basically told her, ‘everything.’ I didn’t have clothes or good shoes or food, or even a toothbrush. She gave me all of that and more.”

Collins remembered she even gave him a stylish leather jacket when he needed a new coat, and she regularly filled his book bag with snacks when she sensed he wasn’t eating enough.

“I always knew that Ms. Collins cared,” said Carroll, who was on the track team and often showered at school. “And she gave me hope to keep going. I learned that if I could conquer being homeless, that I could conquer anything. Because of her generosity, I didn’t give up. I’ll remember how good she was to me for the rest of my life.”

Students such as Carroll who return a year or two later to say ‘thank you’ make the long days of cleaning floors, scrubbing toilets and emptying trash cans worthwhile, said Collins, who said she dreams of one day opening similar closets in other high schools.

“When I tell them, ‘I love you,’ and I see the smiles on their faces, that’s pure joy,” she said. “Everybody needs somebody. Seeing that they know they are loved, that’s my reward.” 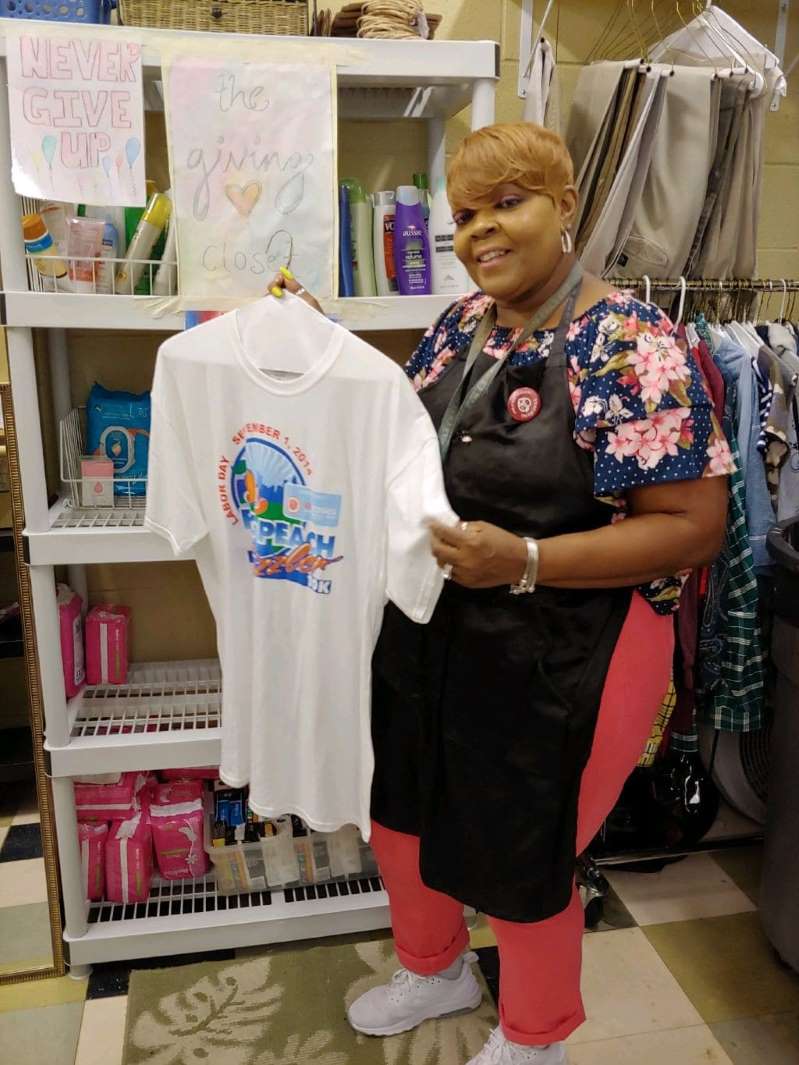