As 2015 approached, Jason Alexander set a goal: photograph 100 sunrises over the course of the coming year.

But as he started his personal challenge to document the beautiful skyline, something became quickly apparent: trash. Large amounts of it. He saw garbage everywhere he looked on the coast of Suffolk in southeast England, where he lives. Cigarette butts, plastic containers, paper — you name it.

“I was moving bits of litter that I would find out of the shot to make the image as good as it could be,” said Alexander, 47.

He couldn’t bring himself to leave the trash there. So after photographing the sunrise, he brought the rubbish home. Soon, he was going out regularly for walks, picking up garbage and documenting his finds on social media. This summer, he embarked on a Beach Clean Marathon, walking 60 miles over six days along the Suffolk coast, picking up discarded bits on 12 beaches along the way.

“One of the things I noticed more than anything was the amount of cigarette butts,” said Alexander, who works as a designer of wildlife camera systems. Since then, he has been on a mission to find out as much as he can about cigarette filters and cigarette butts.

One number that shocked him: an estimated 4.5 trillion cigarette butts are thrown away every year worldwide. In fact, across the entire planet, it is the most common form of litter on the ground. And even worse, the butts hold plastic filters, along with tobacco and ash.

“That’s a huge amount of plastic finding itself into the environment, as well as all the toxins,” he said.

Cigarette butts are the single most collected item in beach cleanups globally each year. They are also America’s most littered item, making up 38 percent of all U.S. roadway litter, according to the nonprofit group Keep America Beautiful.

Apart from being eyesores, cigarette butts are toxic, non-biodegradable and pose risks to the environment. Butts dropped on streets make their way into drains, streams, rivers and oceans, leaching contaminants into waterways, potentially poisoning fish and other animals that eat them.

The excessive amount of discarded cigarette butts, as Alexander put it, was a “real pain in the butt.” Not long after he completed the beach clean marathon, he embarked on another epic journey: a quest to pick up one million cigarette butts.

The first evening of the challenge, he spent an hour picking up cigarettes at a parking lot on the southern tip of Suffolk, a popular gathering spot for people to watch gigantic container ships sail by. Total number of butts collected: 1,789. He formed the butts into the number 1789 and posted a photo on Instagram.

Since then, he has headed out to collect cigarette butts most days of the week. On one excursion, he teamed up with a local charity and picked up 2,696 butts in the seaside town of Felixstowe and again posted on social media.

In another outing along a family walking trail in the town of Ipswich, he picked up 3,804 butts. And just this past weekend, he painstakingly collected 7,287 cigarette butts along a 32-foot stretch of cycling path bordering the Ipswich Hospital.

As of early September, he had collected just under 19,000 cigarette butts.

“So I have a long way to go,” he said. Counting the butts, too, takes a good amount of time. After picking them up, Alexander empties his bucketful of bounty onto a large tray. Then he gets comfortable, puts on some gloves and music, and starts counting them one by one, keeping tabs with a notepad and pen. He makes sure to do the counting outside.

“As you can imagine with cigarette butts, it stinks,” he said. “It’s pretty disgusting.”

There are some efforts in the United States to manage the disposal of cigarette butts. In 2016, for example, Boston launched a lighthearted “Neat Streets” campaign, installing five receptacles in areas with high foot traffic throughout the city. Unlike a standard ashtray, the red boxes turn the mundane act of disposing a cigarette butt into a kind of game. Each box is see-through, with a question written at the top and two possible answers to choose from. Residents put their stubs into one of two holes, casting their vote for things such as their superpower of choice (flight or invisibility) and the most valued quality in a friend (loyalty or humor).

The bottom line, said Alexander, is to raise awareness, making people realize the environmental threat cigarette butts pose and encouraging them to pick them up.

“As a society, we’ve become blind to a lot of the litter and plastic that we produce, in particular cigarette butts,” he said. “Many people that I’ve spoken to, smokers and nonsmokers, have no idea that there’s plastic in cigarette butts. And many of them … didn’t even consider cigarette butts as litter.”

Alexander plans to continue devoting his spare time to picking up cigarette butts, and partnering with other people and organizations to spread the word and hopefully make this a global effort.

“A million cigarette butts could just be the beginning,” he said. 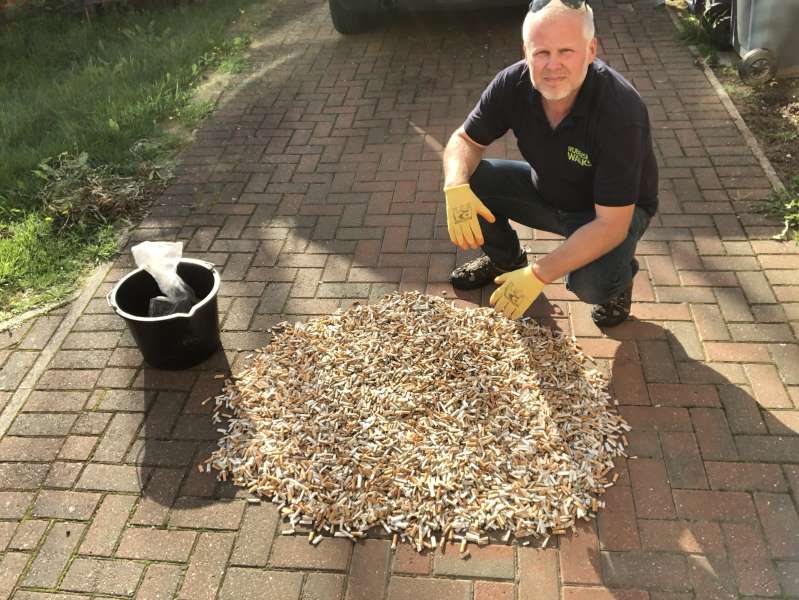