By Liv Osby, USA TODAY School had just started in August 2017 when Conner Combs began vomiting for no apparent reason. “He’d throw u... 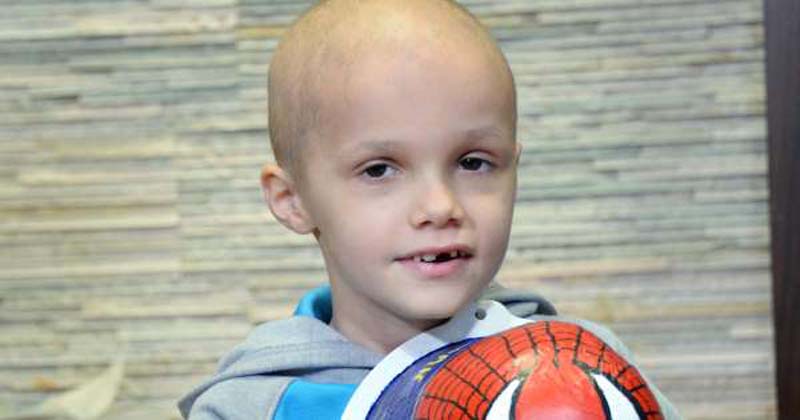 School had just started in August 2017 when Conner Combs began vomiting for no apparent reason.

“He’d throw up at school. He’d throw up in the mornings. Anytime,” his mom, Rachel Combs, said. “It would just come on.”

And in February an MRI revealed a 1.7 inch tumor on his brain, said his dad, Andrew Combs.

“You could look at him and tell he was sick,” he said. “But we would never have thought it was a brain tumor.”

After two surgeries and rehabilitation to learn how to walk again, Conner was set to begin radiation treatments to shrink what was left of the mass.

“It was scary,” his mom said. “You don’t know what you’re walking into really. There are so many emotions.”

Before treatments start, technicians fashion a white plastic mesh mask to keep patients immobilized and spare unaffected parts of the brain while beams of radiation are directed at the tumor.

It’s an unpleasant experience at best. And at a frightening time.

So Jennifer Cook, a radiation therapist at Greenville Health System’s Cancer Institute, decided that the masks could at least be made to look like something fun. Maybe Batman. Or Mickey Mouse. Or a fairy princess.

“I started thinking these masks are white and bland and not fun at all for kids,” she told The Greenville News. “I felt like if we could make it a little more fun for them, they might be a little more excited about coming in for treatment. Because the kids are scared.”

Brain cancer in children is mercifully rare — about 5.4 cases per 100,000 children and adolescents, said Dr. Michael Greenbaum, a radiation oncologist with GHS. But when it does occur, radiation is often the treatment used to fight it, mainly for inoperable tumors or those that are operable but have very high recurrence rates, he said.

It’s used for some leukemias, as well. And the mask is used to keep the head immobile so the smallest amount of radiation can be used, he said. While the treatment itself isn't physically painful, it can generate a lot of anxiety, he said. And sometimes treatment is required daily for up to six weeks.

It takes a huge toll on the families, he said, noting the youngest children are anesthetized.

And the masks really make a difference.

“The kids really like them,” Greenbaum said. “It makes what is, let’s face it, a horrible experience, a nice aspect of the experience because they get to choose something ... themselves.

“It personalizes a mask that probably otherwise would look like it’s from Friday the 13th.”

Cook, who’s been with the Cancer Institute for seven years, not only paints, she’s involved in other artistic endeavors as well, such as sewing and mosaics.

So when new children come in for treatment, she finds out who their favorite movie or cartoon characters are. In recent years, in addition to the ever-popular Superheroes, there’s been a string of Olafs and Elsas as well, she said.

Then she sets about creating the masks by transferring the image she wants onto tissue paper, adhering it with adhesive, and once it’s dry, applying the colors using acrylic paints.

Along with the character's face, she painstakingly designs special details on the sides, like a miniature Gotham City on the Batman mask, starships on the Star Wars Stormtrooper mask, or cupcakes, lollipops and animals, individualized for each child, who can take the mask home once treatment ends.

Each labor of love takes about 20 to 30 hours to create, said Cook, 41, who was named the 2017 GHS employee of the year in no small part because of how she helps these children. “Coming to the doctor is always needles and pain. I wanted to make it fun,” she said. “The kids really love it. It’s something they enjoy and can relate to,” she added. “And it fills a creative interest I have. I get great pleasure from it.

Conner, who endured 30 radiation treatments, chose a Spiderman mask, his mom said. And he was thrilled when Cook presented him with it.

“It’s one of his favorite Superheroes,” she said. “He was so happy. It was like Christmas Day.”

Describing him as “a very old soul in a little boy’s body,” his mom said he was very strong through all the treatments and is now doing “wonderful.” And the mask helped.

“It definitely made everything so much easier for him,” she said, “for everyone emotionally.”

Once treatment was finished, the Westview Elementary second grader, who is now undergoing chemotherapy too, brought his mask home where it hangs on the wall.

“We have it up as art because it’s so awesome,” his mom said. “Just to know that people do care and go the extra mile to make a little child happy and put a smile on their face.

“That’s all that matters right now.”