‘Joe the Barber’ is about to make his final cut

© David L. Ryan/Globe staff Since he was a young boy, William Young, 67, has been getting his hair cut by Joseph Monahan. By E...

By Emily Sweeney, The Boston Globe

Joe Monahan has been cutting people’s hair in Jamaica Plain since 1959. But he will soon hang up his clippers for good when he retires next week.

Monahan, 86, has made his barbershop at 262 Hyde Park Ave. something of a local institution.

Day in and day out, from 9 a.m. to 5 p.m., he’s in the middle of it all, as he clips, trims, and shaves the hair of men of all ages, many of whom are repeat customers. Some of the guys live in the city. Others left the neighborhood and moved out to the ’burbs, but when the time comes for a trim, they know where to go.

Monahan is in constant motion when he’s working. Wearing a collared shirt and slacks, he peers through his glasses while holding a comb in his left hand and electric clippers in his right. His hands move quickly and deftly as he chats with his customers.

“There’s nothing I can’t find out in a day,” Monahan quipped. “I pick their brains every day.”

The radio is tuned to 740 AM, which is WJIB, a memories station that plays songs by Johnny Cash and “Daydream Believer,” by the Monkees.

The prices are posted on the wall, and they haven’t changed for years. Men’s and boys’ haircuts cost $13 (senior citizens pay $12). Beard trims will only set you back $6.

As Monahan worked on his latest customer, William Young, 67, they reminisced about how long they’ve known each other.

When he finished, Monahan removed the hair cutting cape from Young’s neck. “There you go, pal,” he said.

Then they shook hands.

Young said his father used to go to Monahan’s barbershop.

“I’ve been coming here since I was a kid,” Young said.

That’s how it works at Monahan’s Barber Shop. A guy gets his haircut there, then he brings in his son. The next thing you know, Monahan is cutting the hair of their grandsons and great-grandsons.

Over the years, Monahan has seen the styles change from crew cuts and flattops to mop-tops and pompadours and back again.

“It was so bad when the long hair came in,” he said. Whenever long, shaggy locks come into vogue, the barbering business takes a hit.

One of his most infamous customers was Adolph “Jazz” Maffie, who was one of the men convicted of the 1950 Brinks robbery. The heist — which was called the “perfect crime” and the “crime of the century” — took place on Jan. 17, 1950, when robbers stole $1.2 million in cash and $1.5 million in checks, money orders, and other securities from the Brink’s building in the North End. “He was a great guy,” Monahan said with a chuckle.

Like most of the patrons of his shop, Maffie returned to get his hair cut again and again. “Only five times,” Monahan said.

“At first, I had no idea who he was,” Monahan said, thinking back. “That was funny.”

When Monahan retires, he’ll be able to spend more time at his home in Canton. He’ll also be able to spend time with his family (he has 18 grandchildren) and do some carpentry and woodworking.

But he’ll miss running his shop.

“All my friends are here,” he said.

Monahan joked that he plans to get on a horse and ride off into the sunset.

However he decides to make his exit, one thing is for sure: Sept. 14 will be his last day in business, and when the shop closes, Monahan and his barbershop will surely be missed.

“They don’t make them like Joe anymore,” Gunning said.

After Monahan finished cutting Gunning’s hair, they joked how this would be Gunning’s last haircut. 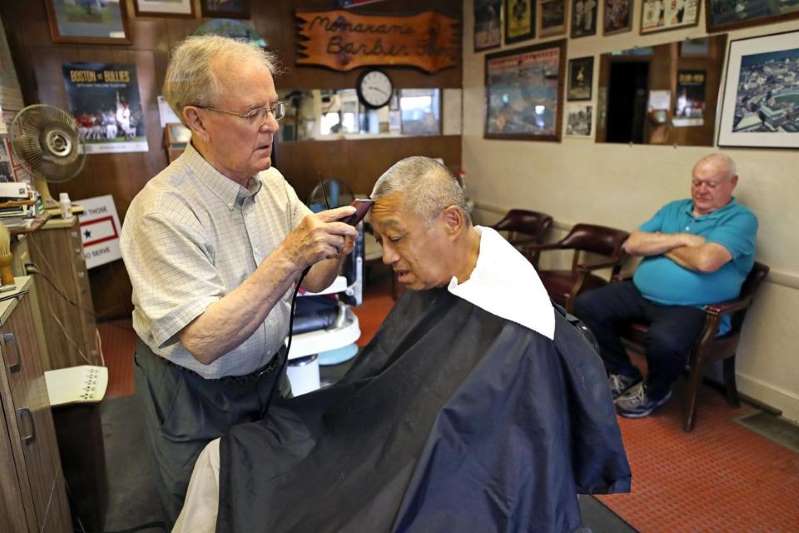