Iguana travels from Mexico to California in woman's bikini top

A baby spiny-tailed iguana stowed away from Cancun, Mexico, to California by hiding in a tourist's bikini top. Photo courtesy of...

Animal rescuers in California said an exotic spiny-tailed iguana traveled to the state from Mexico by stowing away in a traveler's bikini top.

The Peninsula Humane Society & SPCA said the woman had returned to her Foster City home from a trip to Cancun, Mexico, when she found the small lizard while unpacking her luggage.

"She had put her bathing suit out to dry on the balcony of her hotel room, and the next morning, packed up her belongings in her suitcase," PHS/SPCA spokeswoman Buffy Martin Tarbox said. "Unbeknownst to her, a baby iguana had decided to nest in her bathing suit and accidentally hitchhiked to California."

The iguana was only a baby, but adults of the species have been known to grow up to 5 feet long, PHS/SPCA said.

Tarbox said the group reached out to state and federal wildlife agencies to determine the best course of action for the iguana.

"We were advised that no mandatory quarantine was necessary and he didn't need to be returned to Mexico," she said. "After treating him for dehydration, he was transported to an animal sanctuary which specializes in such reptiles by the woman who found him." 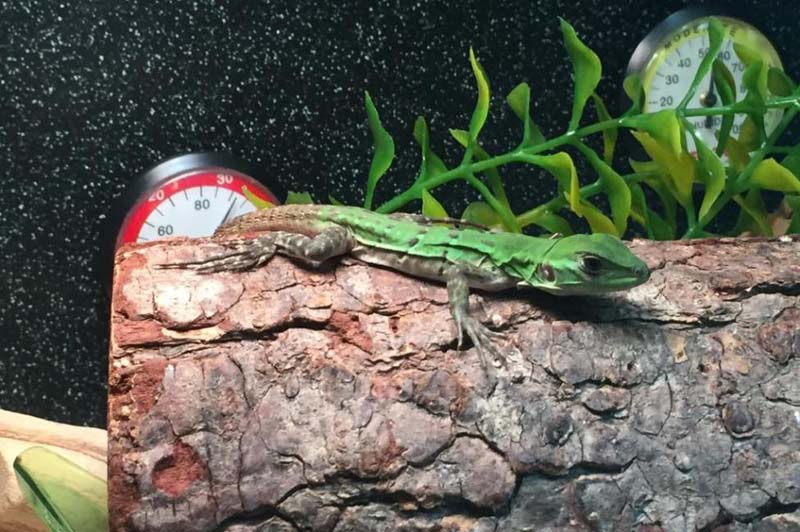