Groom rushes from his own wedding to fight a fire

© Provided by WP Company LLC d/b/a The Washington Post The wedding party watched and waved as Jeremy Bourasa left his wedding to fig...

Krista Boland had been engaged to her fiance for almost five years. Every time she thought about planning the wedding, life got in the way: She was in nursing school, the couple had two children and her mother died.

Finally, over the summer, she set aside time to plan her wedding to her longtime partner, Jeremy Bourasa. But a few weeks before the big day, a problem came up with the venue and the couple had no place to hold the ceremony.

They looked everywhere and ended up settling on the firehouse in St. Paul Park, Minn., where Bourasa was a firefighter. The chief gave his blessing.

Despite the location of the Sept. 1 wedding, Bourasa said he was not concerned he would get called out on a fire. First, he wasn’t on the clock, and second, there are only a handful of building fires a year in St. Paul Park; most of the other calls are for more minor incidents.

But as the ceremony was finishing up, just after the happy couple began taking wedding photos, a loud call echoed through the firehouse: A nearby house was ablaze.

“I was like, ‘Nope, you’re taking pictures, don’t even think about it,’” she said in an interview.

But then a second call came. The firefighters badly needed backup.

At that point, Bourasa and his new wife met eyes.

He yanked off his suspenders, unbuttoned his dress shirt and jumped into his firefighting gear. He hopped on the truck and raced to the house fire.

“He moved faster than I’ve ever seen him go,” she said.

As the engine pulled out of the station, the entire wedding party lined up and waved.

Boland, now Krista Bourasa, 32, said it was an emotional moment for her because it brought to the forefront recent tragedies. Her sister lost her home in a fire. And the ultimate sadness: Her nephew and niece, ages 11 and 9, died in a house fire three years ago.

“Part of why I sent him to that fire is I’ve been there to experience it,” she said.

It also means she feels anxious every time he goes out on a call.

“After what’s happened to our family I’m probably the biggest worry wart ever,” she said. "Every time he goes out to a fire, I’m always worried. You always have that pit in your stomach."

At the scene of the fire, Bourasa saw that the house was fully engulfed in flames. Everyone had escaped safely and without injury. Bourasa helped fight the blaze for two hours. Once it was under control, his captain told him to go back to his wedding. The 150-person reception had been going on for hours at a nearby hall they’d rented.

He raced back to the firehouse, cleaned up and headed straight over.

“The guests did a standing ovation when he came back,” Krista Bourasa said. “It was really cool.”

Her new husband jumped right into the party.

“He was exhausted, but he didn’t even show it,” she said. “He celebrated the night and had a fantastic time.” 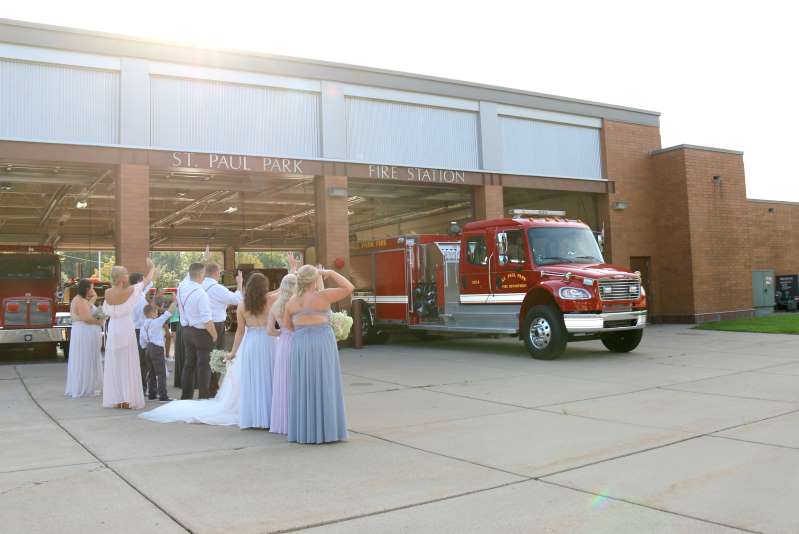