Tribune News Service
SAN DIEGO
For surfers, the ocean hides an unseen, powerful magnet that keeps luring them back.

That is the only explanation for why 68-year-old Ron Greene straps a 9-foot-8 longboard to his bike nearly every day at his house in Pacific Beach and pedals four blocks to the water.

Four times over the last 14 years, Greene has suffered heart attacks while surfing. The most recent was last December, and the worst came five years ago this month, when Greene collapsed on his board while competing in the OMBAC Classic longboard contest.

He drowned that day and had no pulse when lifeguards revived him on the beach.

Yet Greene keeps on surfing.

"Maybe I'm an idiot. Maybe I'm a fool," the affable Greene said. "I just want to keep living and enjoying it. There is an immensely good feeling after surfing. ... I force myself to go out there sometimes just for the exercise and the feeling afterwards.

"Believe me, now that I'm older, I don't like surfing crap. I like to go out when the conditions are nice. But sometimes, you just have to go."

Greene, who has owned a San Diego auto storage business for 45 years, can recount his heart attacks with little emotion and great clarity.

He suffered his first, at the age of 54, in 2004 while surfing the spot called Church on Camp Pendleton.

"I got there with friends and I wasn't feeling too good," Greene said. "I paddle out and there's a nice little set, and then —boom! —it's like an elephant is sitting on your chest. It's super painful."

Greene managed to paddle to shore, called his doctor and drove himself to the hospital. A blood test diagnosed a heart attack and Greene went into surgery the next day to receive seven stents. On the table, he said he suffered cardiac arrest.

"I'm waking up, and they're asking me to cough," he recalled. "I look forward, and they've got these orange pads on my chest. They said we had to defib you back. Your heart stopped."

Greene went seven years without any issues. Then in February 2011, he was surfing at La Jolla Shores and felt a similar pain to the first time. Again, he drove himself to the hospital and received his eighth stent.

The next crisis would be far more serious and frightening.

Greene reached the semifinals of the '13 OMBAC contest and was in the water for his set when a heart attack came without any warning.

"No pain. No discomfort. Nothing," Greene said.

He fell into the water, and the observers on the beach didn't realize what was happening. Beyond suffering the heart attack, Greene was drowning. A friend of Greene's, who was watching from Crystal Pier, began screaming at lifeguards for help, and they eventually raced out to get him.

Ironically, Greene's son, Alex, was a San Diego lifeguard for 11 years, but he wasn't there that day. Neither was Greene's other son, Kevin, or his wife, Cecelia.

Celia Hoffman, a longtime friend from the PB Surf Club, saw the commotion, realized the victim was Greene, and rushed to his side.

"He was bluish-gray. I was thinking he was gone," Hoffman recalled.

"It was just horrifying to see this very fit, healthy man (in that state). It was shocking to me."

The lifeguards worked frantically, first having to clear water from Greene's lungs. Then, after cutting off his wetsuit, they were able to use a defibrillator to restart his heart.

"They were working on him, and I'm telling him, 'Hang on, Ron, you've got this. You're not going anywhere,' " Hoffman said.

"Then I heard them say that they had a heartbeat and he was responding. I knew he was going to be fine. He's just too much of a stubborn fighter. He's not a crotchety old man, but he doesn't take any BS from anybody."

Of the care he received on the beach that day, Greene said, "If I had been at Sunset Cliffs or somewhere else, I wouldn't haven't survived."

At the hospital, Greene was put into a cold induced coma, and after he was awake and recovering, he underwent quadruple bypass surgery.

"The thoracic surgeon who had my heart in his hand said, 'You have a very strong heart, but your plumbing is bad. We're going to fix that and you're going to be back doing what you're doing,' " Greene said.

Greene was back in the water two months later — a month ahead of doctor's orders.

One year later, in September 2014, Greene traveled to Malibu, where he'd grown up surfing, and won two events in an invitational. At the awards ceremony, he took the microphone and counted his blessings.

"There aren't too many people who have won both in any age bracket," Greene said, "and after having heart issues the year before."

Greene said his most recent heart attack came in December at Swami's. He'd been off his blood-thinning medication for several days due to an upcoming test. He was in the water, felt some discomfort in his chest and made his way to the beach. This time, he didn't drive himself, but had a lifeguard call the paramedics.

Greene got two more stents at the hospital. Now he has 10.

In speaking about his trauma, he hopes to prod others into getting checkups. "I have surfer friends who never go to the doctor," Greene said. "They're afraid to go. And a basic blood test can tell you a lot. If you get it checked early and they find something, they can fix it. If we can save some people, that's what it's all about."

Not to be lost in all of Greene's medical issues is that he is a very accomplished competitive surfer. The current president of the PB Surf Club, he has collected dozens of trophies —"dust collectors," he calls them — since the mid-1990s.

Greene has won Legends Division events this summer at Tourmaline and Malibu.

"He's skilled and he's consistent," said Alex Greene, 30, who has been surfing with his dad since he was 6. "For being 68, he's an incredible surfer. He's always one of the top five guys in the water. He still swings the board around really well, throws it over the top."

Some surfers are just fine surfing for the fun of it. Ron Greene loves competing.

"I'm a Type A, very competitive," Greene said. "Sometimes, everything comes together. The ocean cooperates, and your mind and body are in a good place. Most of the time, it's a dog fight. You're fighting with five other guys for 15 minutes.

"It's difficult, but I get off on it. I enjoy it. I'm backing off a little bit, though some wouldn't say that."

Greene's family and friends marvel at his love of surfing, but they can't ever completely block out that he's had four heart attacks in the water.

Hoffman said she still gets chills at the memories anytime she's near Crystal Pier.

Considering the possibility of another emergency for Greene, Hoffman chuckled and said, "I've told him, if he does, I'm walking out. Our friendship is over." 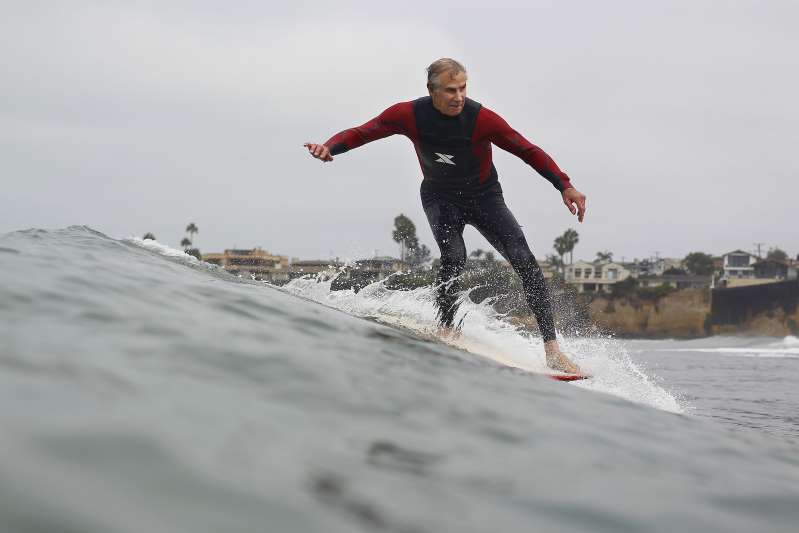