By Don Stacom, The Hartford Courant

Sept. 06--Sometime around 7 a.m. on Thursday, a customer in a generous mood paid for the coffee of the next personin the drive-thru line at a Southington Dunkin' Donuts in Connecticut.

That small random act of kindness triggered a "pay-it-forward" streak that ran unbroken for three and a half hours at the franchise's 262 Meriden-Waterbury Turnpike location.

"This was such a great day -- they just kept coming, and each one kept it going on, paying for the next person in line," Manager Paula Raposo said at the shop Thursday afternoon.

The morning rush hour is a busy one at the Dunkin' Donuts, which lies less than a mile from Interstate 691, and occasionally there will be a series of customers who pay for the next person in line, Raposo said. Typically the customers don't know each other and are just passing along a cheerful little surprise.

"People come with their money or credit card ready to pay, and we tell them the person ahead had paid for their order," Raposo said. "They're usually so happy about it, and sometimes they pay for the person after them."

Raposo estimated that more than 30 customers participated during the streak.

"There are teachers, lawyers, our regulars -- everybody," Raposo said. "The crew loves it."

Some customers leave cash or the leftover value of gift cards to cover the bill, while others pay with credit cards. By the time their own order is ready, another clerk has taken the following order and can add it to their bill.

"It starts with just one person trying to do a good deed and they just pay for the next order after them," said Jaiy Perez, a cashier. "Normally what we do is let the (next) customer know somebody paid for your order already, would you like to keep it going?"

Thursday morning was unusual, though, because the pay-it-forward chain held until about 10:30 a.m.

"Today it went on forever. Usually it will stop after a couple cars," said cashier Isaiah Santana. "It's good to see that. People are being nice to each other."

Even on National Pay It Forward Day -- April 28 -- the chain does't last that long, the staff said. Raposo said she saw nothing that tied together the customers Thursday except their generosity. 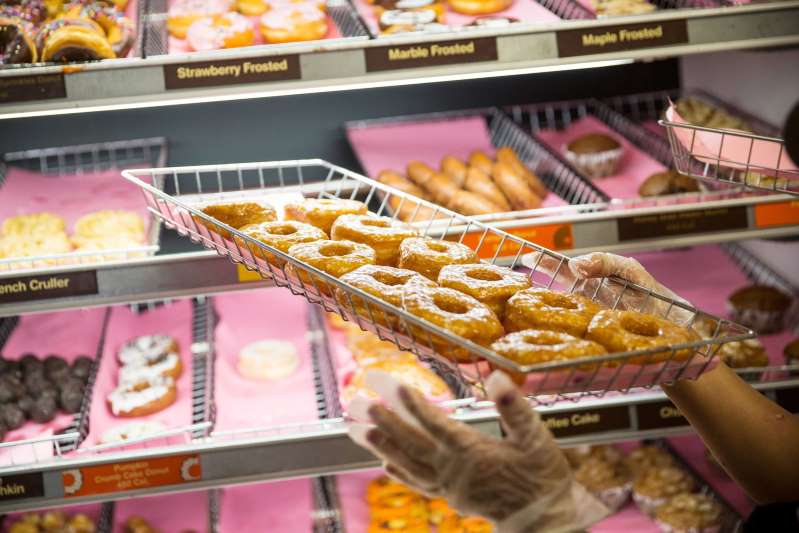