Pat Anderson admits to spending nearly half of every day knitting in her living room rocking chair. But don't underestimate this hard-working philanthropist.

Anderson, 86, is the founder of the Sisterhood of the Boobless Wonders, and the fashion accessories she turns out in her "knocker rocker" each day are knitted pairs of breast-shaped bra inserts that she calls "Busters."

At her own expense, the veteran textile designer makes the lightweight synthetic yarn-and-microfiber cushions and mails them to women like herself who have undergone mastectomies as the result of breast cancer.

Since January 2017, she has shipped 187 pairs of Busters to grateful women around the country, and the prolific artisan has another 100 pairs in reserve for anyone else in need.

Anderson's Busters come in all major bra cup sizes and a rainbow of delicate pastel colors. The one yarn shade she avoids is beige because she said it looks too much like skin.

"I don't call my Busters prosthetics because they're not replacement parts," she said. "These are nice little accessory products to give you some comfort and dignity and they help make your clothes fit right."

Anderson lost her breasts to cancer at the age of 74. During her recovery she received a pair of silicone prosthetic forms to wear inside her bra.

"They were terrible," she said. "I think every breast cancer survivor has a pair of those in a box hidden in their closet. They're heavy, they hurt your back and they don't fit properly."

She experimented with rolled-up socks and bath scrubbers but nothing worked. Eventually she gave up and wore nothing, but her clothes never fit properly and she could no longer use her own body as a model for her handmade jackets.

Then three years ago her daughter and fellow fiber artist, Kristin Osborn of Ramona, emailed her a link to the website for Knitted Knockers, an organization that works with knitters nationwide who make breast-shaped bra inserts for people like herself.

Anderson joined the group and produced a couple hundred pairs of Knitted Knockers. But she didn't like the knitting pattern they use because the cushion it creates is unnaturally ball-like. She also didn't like that volunteer knitters had to buy the patterns and yarn kits from the yarn stores that run the organization.

Instead, she decided to start her own organization, the Sisterhood of the Boobless Wonders (SBW for short) and has made it the final capstone project of her 50-year career as a fiber designer and craftswoman.

Anderson was raised in Minnesota, the descendent of a long line of Scotch-Canadian weavers, spinners and tailors. She learned to knit as a girl from her mother and grandmother, making socks for injured soldiers in World War II.

As an adult, she taught college-level textile design at a private studio where she made and sold her weavings, pillows, jackets, table linens and yardage for sewing. She said she prefers functional design over visual fiber art because it's designed to be touched.

"It's a form of communication when you work on a handcrafted item because your entire energy is focused on it and that comes through your hands into the piece," she said.

Her late husband Duane Anderson was an early computer design engineer whose company was purchased in 1982 by NCR Corp. As part of the sale, the couple relocated to Escondido, Calif., that year for what was supposed to be a two-year stay while he did transitional work at the NCR plant in Rancho Bernardo, Calif.

But Duane fell in love with California and decided to retire here two years later. They bought a 20-acre ranch in Escondido. He built a woodworking shop and became known for his handcrafted spinning wheels built from his wife's design. She relaunched her fiber business with her daughter.

In 2006, she fought and beat breast cancer. Four years later, her husband passed away. When her eldest son and caretaker, Erik, died earlier this year, she moved into Escondido's Redwood Terrace retirement community with her dog Charlotte, a Rhodesian ridgeback.

Anderson works with Sharp Memorial Hospital's oncology patient navigators to get referrals for women who'd like a pair of her Busters. She also takes requests via email at spinshuttlestudio@gmail.com.

Among her satisfied recipients is Cindee Collins of Murrieta, Calif., who lost both her mother and grandmother to breast cancer. After her double-mastectomy a few years ago, she found Anderson's Busters during an online search for prosthetics.

Collins said she loves how she can fit the soft, adjustable, lightweight and fully washable Busters in the pockets of her sports bra, and she especially loves how they were designed by a breast cancer survivor who understands the challenge mastectomy patients face.

"She's just a lovely, lovely lady and she does this for the love of it," Collins said. "I think these are the greatest thing since sliced bread."

Another recipient from San Diego, who asked that her name not be used, said she was so unhappy with the prosthetics on the market that she went lopsided for four years after a single mastectomy. Then she heard about Busters.

"I thought I was doing OK without it until I got these and it really changed my perspective," the woman said.

Anderson underwrites the cost of her materials, including the cellophane gift bags she packages the Busters in and the butterfly-decorated shipping bags she mails them in. Inside each package is a letter bestowing upon the recipient honorary membership in the Sisterhood.

Recipients can make an optional donation for postage, and many checks have come in tucked into hand-written thank-you cards. What Anderson doesn't use for postage, she saves and donates to Sharp's breast cancer program.

Anderson said she plans to use the rest of her retirement years making Busters and hopes on day to pass along the project to other master knitters or members of the Sisterhood.

"This whole experience has been the most fun I've had yet," she said. "It's so fulfilling talking to these women who all appreciate that I'm a survivor. I know what they're going through because I've been where they're been." 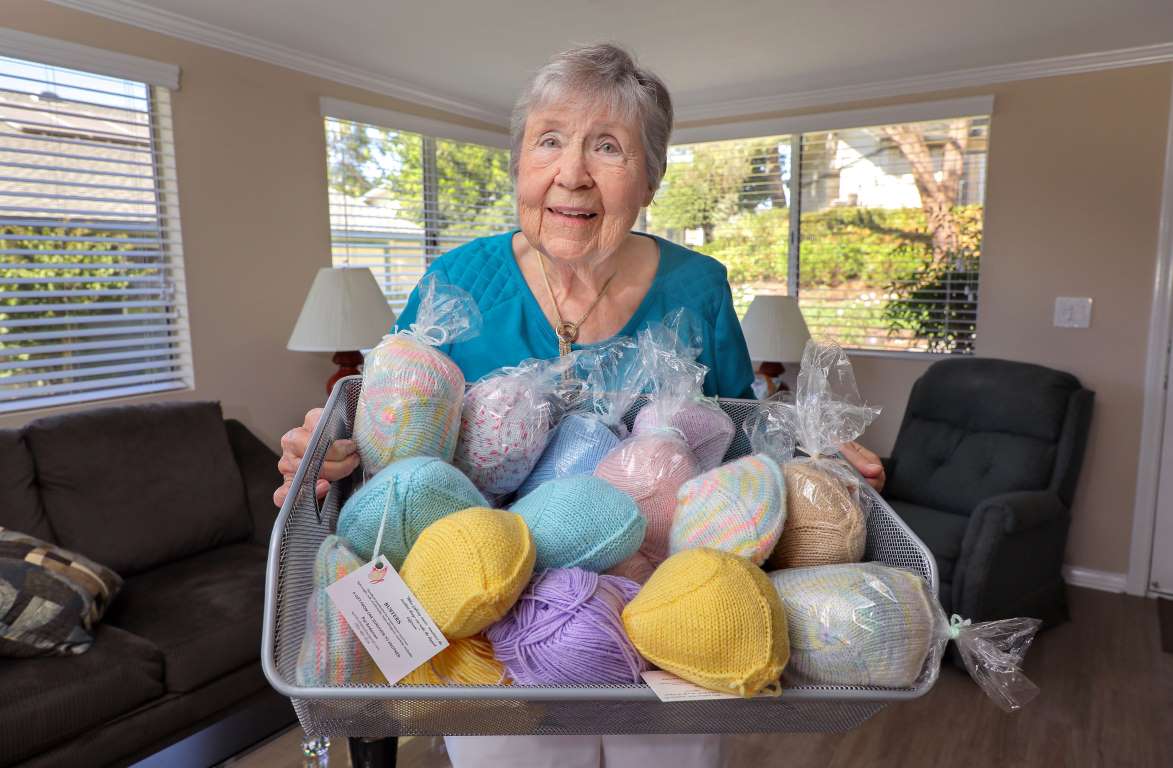