Baltimore’s homeless veterans get their own free barber shop

© Jay Reed/Baltimore Sun/TNS Bobby Canaday is barber for the single-chair barber shop at the Maryland Center for Homeless Veterans E...

For years, a typical haircut at the Maryland Center for Veterans Education and Training was delivered simply and with no frills. The barber, a resident veteran skilled with a pair of clippers, often improvised, using a chair in the middle of a hallway.

But on a recent Monday at Jonestown's 24-hour residential housing and training facility for homeless veterans, haircuts had a home.

Thanks to Rob's Barbershop Community Foundation, the center opened its first single-chair residential barber shop and beauty salon, which will provide no-charge grooming services to homeless veterans, an important part of their recovery, skill-building and job readiness, said Cereta Spencer, director of development and community engagement.

The center's barber shop — stocked with clippers, a mirror, a hair dryer, a shampoo bowl and an array of barbering tools and hair products — opened on June 25 after months of construction.

Veteran and aspiring barber Bobby Canady, 57, and fellow veteran Sidney Pierre, 65, were the first to take advantage of the new space.

"It's something else. It's cool ... rather than sitting out there," said Pierre of the space, pointing out to the hallway.

Canady, one of the center's go-to barbers, flicked a black cape decorated with an assortment of white mustaches into the air, floating it down gently around Pierre's neck. Grabbing the clippers, he began to shave down Pierre's gray hair into a "No. 1" — a short, neat cut.

"I'm going to make him look like a teenager again," said Canady, who needed around 140 hours as of late June to complete his barber apprenticeship program.

The center's barber shop will rely mostly on residents and its "in-house barbers," with help from volunteers and contractors as needed, according to Cradle.

"All they need is access," Cradle said. "If you give them the equipment and the space to do it in, they will take care of the rest."

Hygiene is also paramount for job-readiness and interviews. A haircut can be the difference between employment and unemployment, Cradle said.

The former barber shop owner launched his community foundation in 2000 after seeing that many people from a nearby homeless shelter could not afford to come to his shop. Cradle began fundraising to pay barbers to contract at local shelters, and eventually expanded so that agencies and public schools could apply for grants to install their own barber shops or provide hair grooming services. So far, Cradle has installed about 10 barber shops around Baltimore, Washington, D.C., and Baltimore and Anne Arundel counties, and has provided transportation and grooming services for people in need.

Cradle began assisting the Maryland Center for Veterans Education and Training after Spencer inquired about the program. The transitional housing facility qualified for a $30,000 grant, which would transform a portion of its small laundry area and hallway into a fully equipped barbershop.

The center's only requirement was to supply water, but "part of the grant said we're not* responsible for bad haircuts or hairstyles," Spencer said.

Today, the shop, which has undergone re-framing and electrical and plumbing work, has at least two resident barbers, including Canady, and is serving as a source of motivation and hands-on experience for veterans, especially those who want to become master barbers, Spencer said. Her overall hope, however, is that it helps build community and contributes to the healing process for veterans, she said.

"It makes veterans smile," she said. "If you look good, you feel good, and you perform 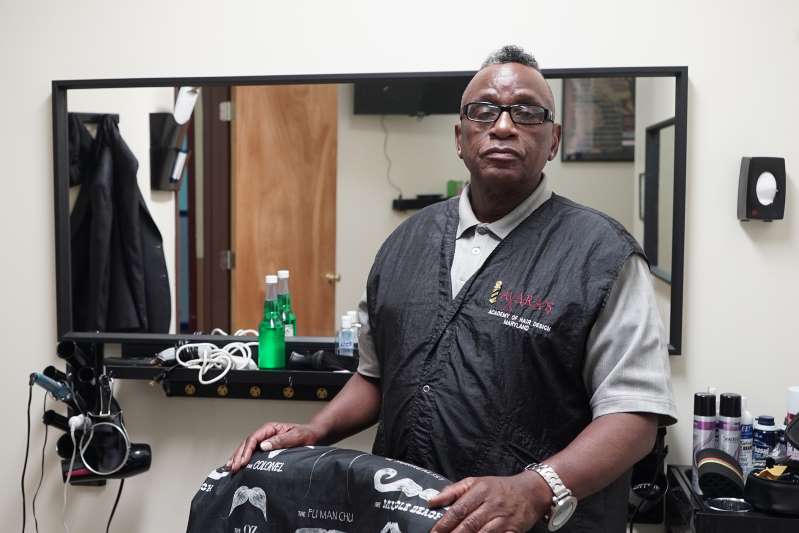