All About the Life-Changing N.C. Book Club for the Homeless: 'It Gives Me a Sense of Belonging'

© Courtesy Candace Vance Turning Pages Book Club members By Michelle Boudin , People Some of them read in their tent by flas...

Some of them read in their tent by flashlight or candlelight, others prefer a park bench — and some just find a quiet spot in the main library.

They are the members of the Turning Pages Book Club in North Carolina. And they are all homeless. And the Tuesday morning gathering at the Charlotte Mecklenburg Library’s main branch is the thing many of the members most look forward to all week.

“I always wanted to be a part of a book club and the people in the group are really awesome,” says Belinda Hunter, 58, who has spent time living in a shelter and on the streets.

Candace Vance started the club in November 2009 after seeing a news story about a similar program in Boston. She approached officials at the North Carolina library and asked if she could run the club on a volunteer basis.

“I just wanted to bring people together and give them dignity, respect and a voice,” the 49-year old software saleswoman tells PEOPLE.

Over the years, the club (which is free to members) has read everything from mysteries to biographies and love stories and has had several hundred people attend the meetings. They typically vote on what to read but often the decision is based on what books have been donated or what books the library can afford to buy in bulk.

“In many ways it’s just like another book club,” says Evelyn Hanneman, the library volunteer who took over for Vance and has been running Turning Pages for the last two years. “Usually we just dive right into talking about the book and there’s usually a lively discussion depending on the particular topic.”

The club recently read Hidden Figures (the story of the African American women who worked at NASA and helped win the race to get to space) and loved it.

“They couldn’t believe no one knew about these women!” Hanneman tells PEOPLE.

She says the club members felt a connection to the book because they feel like society often disregards them as people because they are homeless.

“I’m grateful this club means there’s a place where they can come and be seen for who they are – which is a person who is homeless, as opposed to a homeless person,” Hanneman says. “Too often they get categorized as ‘the homeless’ and at the library they can just be normal, have a cup of coffee and some talk.”

The book club founder, Vance, travels for work more in recent years, but still tries to attend the meetings as often as she can.

“The members have become like family,” she says. Several were at her wedding and, a few years later, helped throw her a baby shower.

Many of the members have been attending the meetings for a while, including Scott Anderson, 58, who has been coming to the club for three years.

“I live in a tent and I have flashlights so I can read every night. I consider my tent my home, I have a roof over my head and blankets,” Anderson says. “I love to read, I usually finish the book way before we’re supposed to discuss it – I’ll read it twice – and we get to keep all the books so I have a growing library in my tent. I can’t complain.”

As for Hunter, she says that although she originally joined the club because she loves to read, Turning Pages has come to mean so much more to her.

“It’s a huge plus in many ways. It’s really great to be around people who are experiencing the same things I’m experiencing,” Hunter tells PEOPLE. “It gives me a sense of belonging and helps to hear what we’re all going through.”

In the last nine years, volunteers have managed to get some club members into housing and have helped others with medical bills, Vance says.

“This past year I had to take a step back, but every single time I make it to a meeting I walk away feeling like I’ve received something. I learned a lesson, gotten perspective – realize how blessed I am,” Vance tells PEOPLE.

“It’s extremely rewarding. I know we make a difference in people’s lives and we’ve developed a community. The participants feel respected and that their voice matters and that’s the biggest thing to me.” 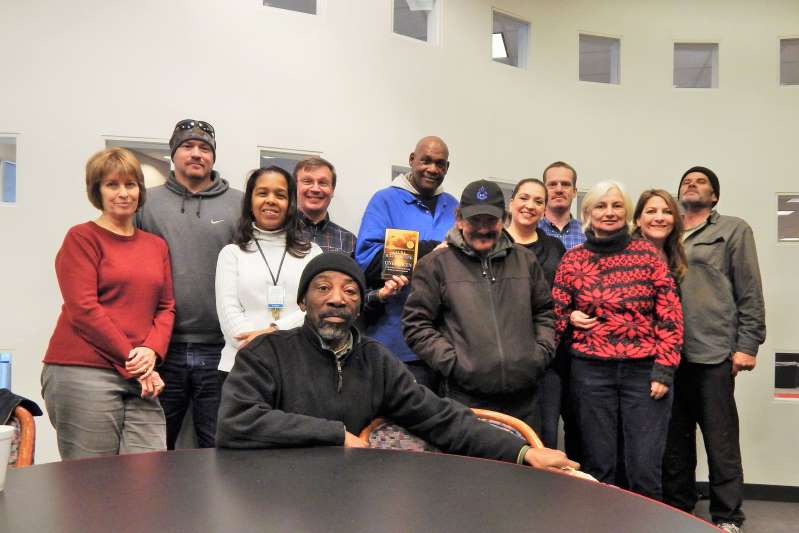