This column is as much a feel-good piece about angels around us as it is a cautionary tale about the dangers of small children choking on even little pieces of food that most moms would consider healthy and safe.

Cheerios. That's what busy Aurora mom Reyna Martinez put on 1-year-old son Nicholas Ortiz's high chair early one Friday afternoon to keep him occupied while she got his older brother dressed after both little boys had just gotten a bath.

It's the standard go-to, as any mom or grandma will tell you, because those tiny bits of oat cereal are small enough even those with few or no teeth can gum them efficiently.

At least that's what I thought. And so did Martinez.

As she was putting clothes on 2-year-old Ethan, she turned to check on his little brother, and to her horror, realized he was struggling to breathe.

The Aurora woman knew what to do. Her 2-month-old had been born prematurely, so she and long-time partner Jonathon Ortiz had both taken CRP classes at the hospital as a prerequisite for his release to go home.

Martinez started the emergency procedure, she said, but when her son did not immediately respond and his color grew more ominous, "I froze up," she said.

Making matter worse, she and the boys' father were sharing a cell phone for a couple days while the second one was getting repaired. And Ortiz had taken it to work that day.

"When I picked Nick up, he was like a limp doll," Martinez recalls, as she ran out the back door and into the alley of her North Avenue apartment, where usually a cluster of people would be standing.

Not so on this day. Nor could Martinez get anyone to answer doors when she began pounding for help.

With her son still unresponsive, the desperate mom ran back into the house, ordered a now-terrified Ethan to stay put, and rushed out the front door to the street, where she stood, screaming for help.

That's when the angel came in to the story. Two, as a matter of fact.

The first was 49-year-old Humberto Coyt, who was delivering flowers for his shop, Floreria Mexico, when he saw the mom and baby.

Coyt, who is a kidney transplant recipient and used to hospitals and emergency situations, said he immediately stopped his minivan and jumped out. Then he gave his cell phone to the frightened mother so she could call 911 and took the limp baby from her arms.

The second angel: Veronica Esparza, a clerical worker at East Aurora High School, was on her way to the bank to get money so her teenage daughter could go to the Tomcat football game that evening when "something made me look back."

What she saw was panic in the street.

She turned her car around. And as the baby was placed in the back seat of Coyt's delivery van, she gave thanks to the CPR training East Aurora puts employees through every couple years.

"The problem was, I had no idea what was wrong with the baby," she told me. "The mother was in such a panic and said something about his bath, so I thought maybe he'd taken in too much water."

"I thought he was gone," admitted Esparza.

His mother thought the same thing.

Both strangers began working on the baby. Then, with one press of her fingers to little Nick's tiny chest, he suddenly "made a bubble sound," said Esparza, and his eyes popped open so unexpectedly, "I thought he had died."

Instead, he began shallow breathing.

Moments later, the ambulance arrived. According to a spokesman with the Aurora Fire Department, the call to Central Fire Station came in at 1:20 p.m., and when paramedics got to the scene, the baby was, indeed, breathing. Nicholas was taken to Rush Copley Medical Center, where he was stabilized; then transferred to Loyola Medical Center where a series of tests, including an MRI, were performed before his release.

A doctor told his mother the baby likely went a few minutes without air. But when I met up with Nicholas at Phillips Park, along with his mom and two brothers, he showed no signs of having survived such a close call, greeting me first with healthy skepticism, then with a series of dimpled smiles.

Martinez was also told by the medical staff Nicholas likely put too many Cheerios into his mouth at once. Some kids can handle this kind of over-stuffing, I've found out over the years, others not so much. Which is why, for me personally, choking has always been and will always be my one greatest fear when it comes to little kids.

"I never had any issues with Ethan," said Martinez, but now "we watch everything Nick puts into his mouth."

Needless to say, it's been an emotional few days for everyone involved in this story. Esparza said after Nicholas was taken away in the ambulance, all she could do was sit in the car and cry, thinking of her own 3-year-old at home. Later, she helped take tickets at the football game ... but admits it was not until after Saturday that she was able to stop thinking about the incident.

Martinez and Ortiz are grateful parents, and both are eager to meet with Coyt and Esparza in the near future, to thank them in person for helping save their little boy.

"Angels were watching over you," Coyt said to Martinez when she called him after things had settled down at the hospital. "I was glad I could help you." 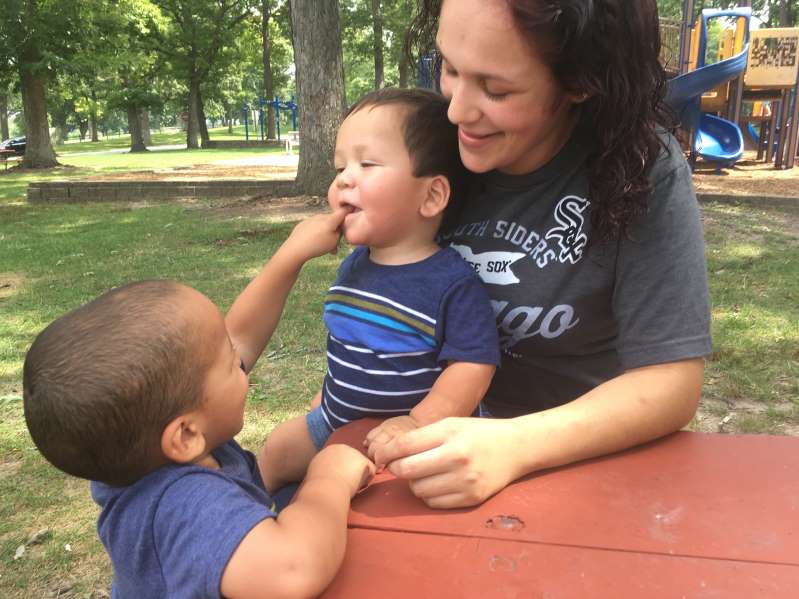