This report is part of #NBCGenerationLatino, focusing on young Hispanics and their contributions during Hispanic Heritage Month.

Puerto Rican high school student José Nolla Marrero was 15 when he asked himself a simple question.

"How can I get products that were healthy but good for the environment? " he said.

In his quest to answer it, Nolla Marrero founded E-Farm, a digital platform that connects farmers across the island with consumers. Nolla came up with a website that showcases farmers' products and then coordinates the purchase and delivery of the sustainable and organic produce and products.

E-farm currently has 24 registered farms with 5 more on the way and has shipped goods to consumers in Puerto Rico, New York, Connecticut and as far as Montana.

Promoting the production and sale of island-grown produce is significant, since Puerto Rico currently imports about 85 percent of its food, a situation that became starkly evident following Hurricane Maria, when it was hard for residents to obtain food. In addition, farming and food production helps stem the island's high unemployment rate and tough economic situation.

Nolla Marrero is part of a rising group of agricultural entrepreneurs who are empowering farmers, a sector that had seen growth just before Hurricane Maria hit Puerto Rico last year.

According to statistics provided by the governor's office in 2016, farm income grew 25 percent to more than $900 million from 2012 to 2014. The amount of acreage under cultivation rose 50 percent over the past four years, generating at least 7,000 jobs; as of 2015, 23,000 Puerto Ricans had farming jobs.
From an idea to action

To turn his concept into a business, Nolla Marrero needed money.

He participated in two entrepreneurship programs that earned him more than $40,000 in grants and seed money to help him develop E-Farm.

In 2015, he joined a Puerto Rican entrepreneurship reality TV show called Hit3001.com; through the show, Nolla Marrero won a $10,000 prize. A year later, he was selected to join Parallel 18, an accelerator program that helps small companies with funding, mentoring, consulting, and introduction to investors. As part of the accelerator program, Nolla Marrero was able to get over $30,000 in funding.

But E-Farm's growth was halted when Hurricane Maria ravaged Puerto Rico. The storm devastated about 80 percent of all the island's crops and severely damaged the island's dairy industry and plantain and coffee plantations.

"Hurricane Maria decimated the entire agricultural industry in Puerto Rico, which made it impossible for me to sell, since none of the farmers could sell themselves. I was also personally impacted," said Nolla Marrero.

Maria left millions of Puerto Ricans in the island, including Nolla Marrero, cut off from the entire world when the hurricane completely brought down the island's communication system.

With no internet and no cell phone service, E-Farm's operations went down temporarily and Nolla Marrero had a hard time finishing school since he takes online courses.

But things have gotten better.

"Agriculture is one of the industries that can recover the quickest," said Edwin Almodóvar, director of USDA's Natural Resources Conservation Services in Puerto Rico.

A year later, most of the island's farming industry has been able to recover effectively, Puerto Rico's Secretary of Agriculture Carlos Flores told NBC News.

As farmers continue to recover, Nolla Marrero hopes to be able to relaunch E-Farm with more farmers and more products — all while applying to colleges.

"Right now, I'm focusing on three things. First is to launch E-Farm. The second thing is to find good colleges. I'm looking for a wide variety of colleges and I'm just learning from the different things that I like and dislike," said Nolla Marrero. He's also trying to figure out ways to use some of the photos he has taken of E-Farm farmers for fundraising purposes.

But Nolla Marrero's long term vision for E-Farm is to serve as a bridge between farmers and consumers, "so consumers can really see where their food comes from."

For farmers, it's been a game changer.

"It surprised us a lot. We thought it wasn't going to work. And yes, we ended up selling a lot," Lydia Díaz Rodríguez, a farmer at Yucae in Yabucoa. "We hope that soon we can start selling the 'pasteles,' the 'alcapurrias,' we're already selling our yuca bread, meaning that we are recovering little by little."

And for Nolla Marrero, this venture which has real-life benefits for so many people beats getting good grades anytime.

"Helping a farmer or helping anyone in your community in particular, I'll put it this way, it feels better than getting an A+," said Nolla Marrero. "It shows how your work really affects people in a positive way." 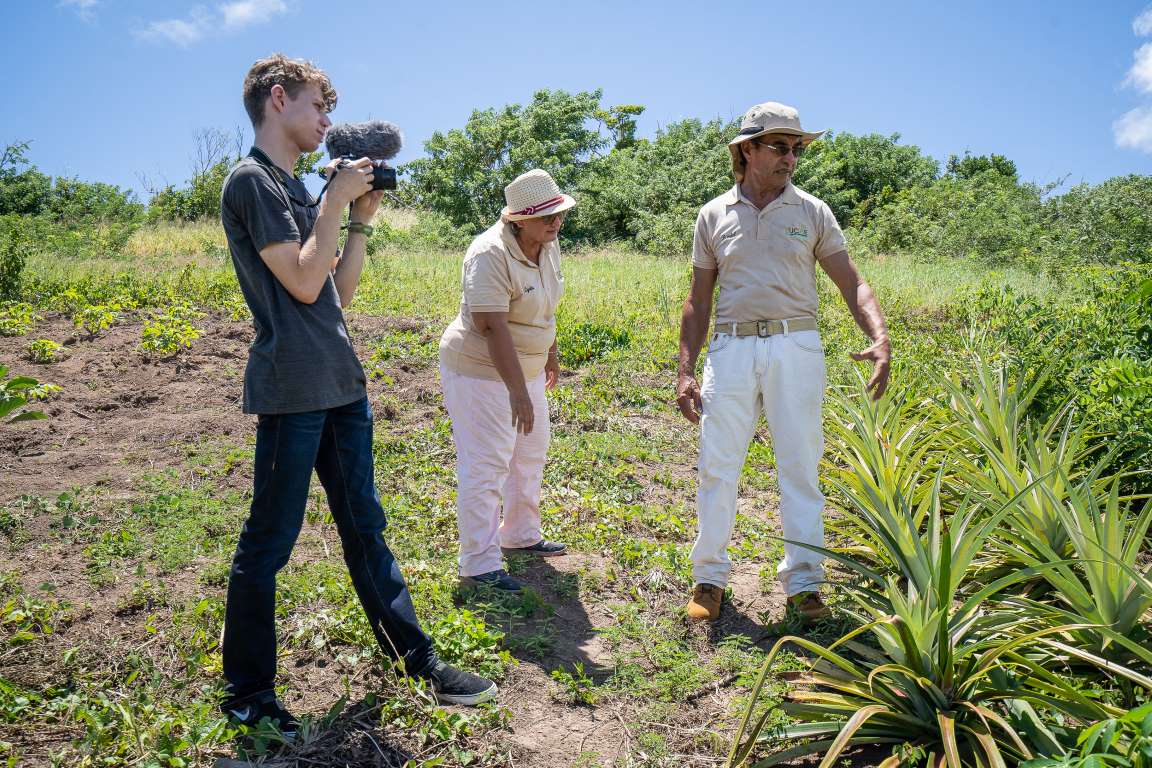