Contributor Content On the Turkish version of the popular game show Who Wants To Be A Millionaire? (The Indian version is known as Kaun ... 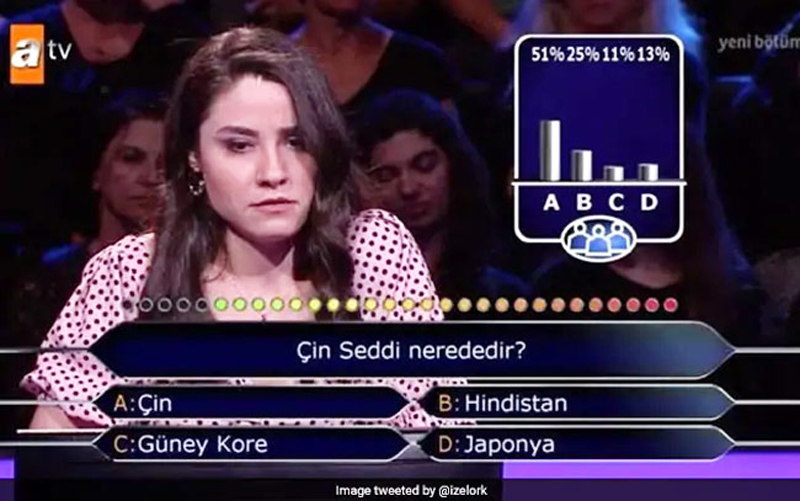 On the Turkish version of the popular game show Who Wants To Be A Millionaire? (The Indian version is known as Kaun Banega Crorepati?), a contestant used up two of her lifelines to answer where the Great Wall of China is located.

According to Hurriyet Daily News, 26-year-old Su Ayhan was stumped when asked to name the location of the Great Wall of China. The Economics graduate from Istanbul was given four choices: China, India, South Korea, and Japan.

Ms Ayhan then used her second lifeline and phoned a friend, who confirmed that the Great Wall of China is, in fact, located in China.

Though she was saved from an embarrassing elimination, many on Twitter criticised Ms Ayhan for failing to answer the simple question.

"I could use my lifelines whenever I wanted," an undaunted Ms Ayhan said in response to the criticism, according to Hurriyet Daily News.

She was eliminated when she answered the next question incorrectly, failing to identify the composer of a popular Turkish song.

The Great Wall, a symbol of China, was built between the third century B.C. and the Ming Dynasty (1384-1644). It is actually not just one wall, but a network of numerous walls running 8,000 kilometers.