Tired of the Bikini, Many Women Now Want One Piece Swimsuit Emoji to Better Express Themselves

The one-piece suit, called a maillot, is being proposed as an addition to the emoji oeuvre which currently consists of just an itsy-bitsy tw...

The one-piece suit, called a maillot, is being proposed as an addition to the emoji oeuvre which currently consists of just an itsy-bitsy two-piece bikini swimsuit emoji.

Emojis are not just meaningless images used to add colour to text messages. With the evolution of digital communication, emojis have taken on the larger aspect of being culture and gender specific symbols of expression.

Just as languages evolves, emojis too have evolved in terms of inclusivity, and awareness about socio-cultural constructs such as sexism, prejudice, homophobia, racial and cultural negligence and appropriation.

[post_ads]In tune with this evolution, the Unicode Consortium, a global nonprofit forum that oversees the addition of new emojis to the emoji lexicon is currently mulling a proposal to add another emoji to the swiftly growing pool – a one piece swimming suit.

The one-piece suit, called a maillot, is being proposed as an addition to the emoji oeuvre which currently consists of just an itsy-bitsy two-piece bikini swimsuit emoji.

The two women leading the initiative, Florie Hutchinson and Jennifer Lee, are what one may call emoji activists.

Florie Hutchinson is the same woman who pushed for the addition of a simple, flat black shoe emoji to the emoji lexicon. Currently, there is only a pointy stiletto emoji to represent womens’ shoes. Hutchinson’s proposal was passed by the UE and is set to be added to the emoji repertoire this year.

Jennifer Lee is the founder of Emojination, a website dedicated to spreading education and awareness about emojis and increasing cultural, social and gender inclusivity and sensitivity. Emojination is credited with the inclusion of the Hijaab-wearing woman emoji, the dumpling emoji and many more.
[post_ads_2]
The women’s proposal focuses on the need to add more options for women to express themselves. Expanding the digital wardrobe of women users is seen as a first step.

While there is nothing wrong with wearing bikins, many women may not identify that as their beach look. Many women may prefer a sportier, simpler look rather than the two-piece swimsuit that many feel is unnecessarily sexualized.

The women also argued that the maillot emoji would encourage body positivity and female expression of fitness and sport in a non-stylized manner. In their proposal to UC, Hutchinson and Lee also wrote that that bikini swimsuit had culturally specific connotations and was not at all an appropriate sportswear for children.

However, not many took to the proposed reform kindly.

Male coders such as Michael Everson have expressed their reservations against the proposal, calling it unnecessary and have recommended the UC to not accept the addition.

Hutchinson felt that the response reflected the male-influence in such areas as digital coding, feedback, etc, the New York Times reported.
[post_ads_2]
She is not the only one who thinks so.

Many on social media have expressed the need for a one-piece swimsuit.

The fact there's no one-piece swimsuit emoji tells me there's not many 40+ women designing emojis.

Come hang out with us! You know you wanna!! ⛱🌞👙(Why is that the only swimsuit emoji? #needmoreemojioptions) https://t.co/fJL17UHtPe

It's not petty. Thousands of little things, including stereotypical, traditional, overly sexualized emojis, contribute to a culture which objectiifies women.
The Fight for the One-Piece Swimsuit Emoji https://t.co/eReBXFlmSY


While the UC has not yet announced its decision, the fact that even beauty pageants now are rethinking the swimsuit round may be a cue for the consortium to act quickly on filling this particular sartorial gap in the otherwise expanding emojiscape. 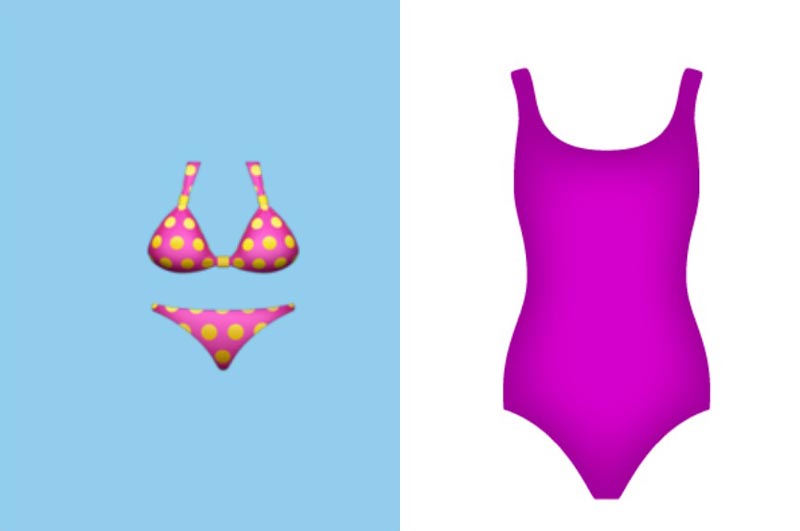