This teen was auctioning his pig to fight cancer. Four bidders in a row had their own plans.

The 15-year-old from Evansville, Wis., said he is “not really that social” — and he especially dislikes standing in front of large groups of people. The auction room at the Rock County 4-H Fair late last month looked like something straight out of his nightmares: dozens of people packed into rows of chairs, all staring at him.

Klitzman took a deep breath and thought about why he came. He was there to sell his pig, Roo. He was there to donate the proceeds to Beat Nb,  a nonprofit organization working to cure neuroblastoma, the most common form of cancer that afflicts children. He was there for his favorite teacher, Kim Katzenmeyer (he calls her “Miss K”), whose niece was diagnosed with the disease a few days before her fourth birthday.

Besides, it would be over soon — he only had to sell the pig once, right?

[post_ads]Over the next hour, three different bidders in a row bought the pig and donated it back to Klitzman, who ultimately raised more than $10,000 for the fight against cancer.

“I did not see that happening,” Klitzman said in an interview with The Washington Post last week. “Usually, they just sell it once! [So] my dream got bigger and bigger every time they said, ‘Give it back.’ I was pretty proud.”

Klitzman and Roo’s journey to the auction block began months before, when Katzenmeyer announced in May that she would soon stop teaching at Evansville High School.

Katzenmeyer loved her job and her pupils. She said there was only one thing that could persuade her to leave her “second family” at Evansville High — her actual family.  Katzenmeyer’s mother and then her niece, Harlow Phillips, were diagnosed with different forms of cancer about two years apart.

Katzenmeyer realized her true calling shortly after Phillips’s diagnosis: She had to spend the rest of her life fighting the disease. She decided to join Beat Nb full time as a fundraiser, taking a significant pay cut in the process.

“I took a risk on a wing and a prayer,” Katzenmeyer said. “This decision [was] probably the hardest decision I ever had to make. Some of the kids were pretty upset, I was emotional about it — [but] I felt that I had to do something.”

At first, all Klitzman wanted was to bring Katzenmeyer back. She was by far his favorite teacher at Evansville. She taught him math. She had a sense of humor. And when she talked to him one on one, it was a real conversation.

“A lot of my teachers, they’ll talk to me, but then they kind of just walk away,” Klitzman said. “She didn’t do that. She just kind of stuck around when I needed help the most.”

The day after Katzenmeyer announced her departure, Klitzman marched in and laid $52 in cash in her hands. It was all he had left from his purchase of two pigs earlier that spring. Klitzman had bought the pigs as part of his involvement with the Evansville chapter of 4-H, a national youth organization that teaches leadership in part through agricultural work.

He originally planned to sell the pigs for meat — and for a profit — at the county fair in July.

Klitzman hoped his money, offered as a donation to Beat Nb, would be enough to induce Katzenmeyer to stay. She was touched, but it didn’t change her mind.

Klitzman, though, wasn’t done. He lost a teacher, but he found a cause. “It just went from there,” Katzenmeyer marveled.
[post_ads_2]
On July 27, the day of the fair, he was ready to auction 265-pound Roo, which he had carefully raised, fed and cleaned for several months.

Klitzman had sent letters to several local companies explaining Phillips’s diagnosis and his plan to raise money. He asked if they would be willing to buy his pig at auction.

At least four recipients took the bait, and the bidding began with a frenzy.

Dan Drozdowicz, the president and co-owner of E & D Water Works, found himself in a fierce war with a representative from Chambers and Owen, a wholesale distributor company. Both were willing to pay much more than the actual value of the pig — which probably was about $3 to $4 per pound, Drozdowicz estimated in an interview — to fund a good cause. But as the price inched past $11 per pound, Drozdowicz pulled his competitor aside.

His opponent agreed, so Drozdowicz bought and returned Roo and then stepped aside. The Chambers and Owen representative promptly purchased the pig at a rate of $10.25 per pound and gave it back to Klitzman, who couldn’t believe it.

Everything was going just as the two men had planned — that is, until Moll Construction (the company which employs Klitzman’s father) bought the pig at a price of $11 per pound. He donated it back for a third time.
[post_ads_2]
“I had had no intention of spending that much money or giving the pig back. But that’s what the people ahead of me did, and I felt like it was the right thing to do, so I did,” said Dave Moll, who co-owns the company. “I was happy to be a part of it. I had no idea how many times that pig could be sold.”

The fourth and final bidder — a group comprising several entities, including a local pub and a pork-producing company — purchased Roo for the still-inflated price of $5.50 per pound. That sale was final, and Roo’s fate was sealed. She’ll soon be someone’s dinner.

As for Klitzman, he’d raised $10,070, and he became a momentary celebrity at the fair. Several bidders posed for pictures with the boy, his mother sobbed her congratulations, and Katzenmeyer rushed over to give her former student a big hug and tell him what a great kid he is.

“I am bursting, my heart is bursting with pride for him,” Katzenmeyer said. “He doesn’t know the impact that he is having, and I don’t think that any 15-year-old kid would at this point. Someday he will.”

For now, though, Klitzman is focused on his next fundraising plan.

He recently planted three acres of pumpkins. He plans to sell them at homecoming this fall and donate everything he earns to Beat Nb. 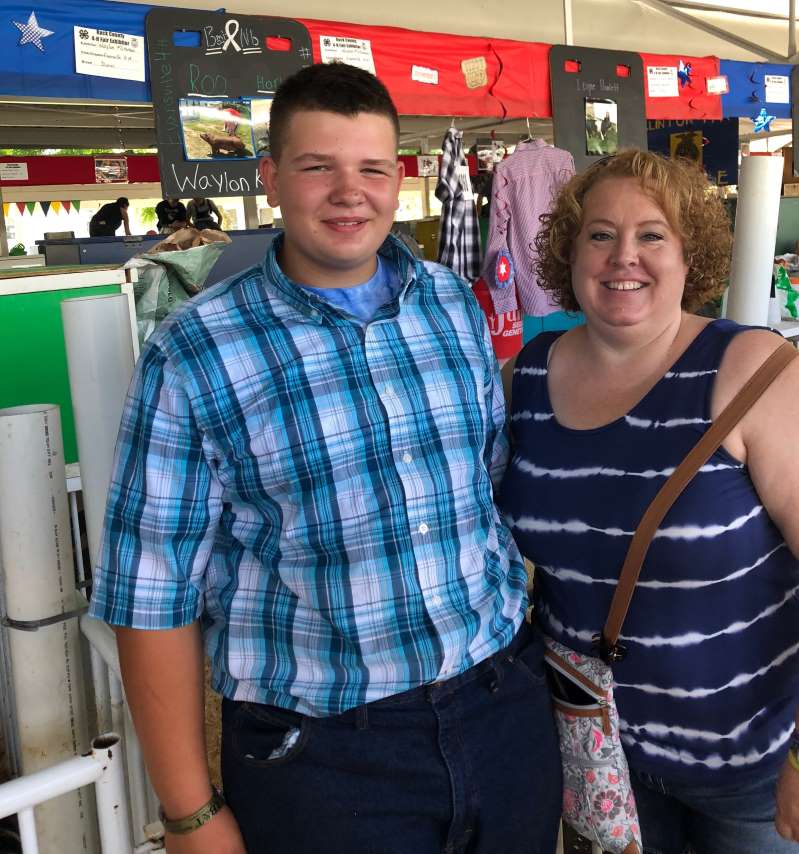