'This is quite a production': 118-year-old train depot fondly put out to pasture

The old and young lined Cedar Road Wednesday, Aug. 15, to witness a moving experience: a 118-year-old train depot left its home in New Lenox, and was moved to Homer Glen.

While many were excited about the remote-controlled process, others said they were "sad" that the historic building had to leave the station it served for so long but were glad it was not demolished.

"We're the last generation to care about this," said Karen Handorf, whose family has farmed here for four generations.

Metra donated the old depot to the New Lenox Area Historical Society, but it had to move it to make room for the new Rock Island Station Shopping Center and later, a new train station, further east along the tracks.

The long-awaited move — originally slated for July 10 — became a community event as crowds gathered to wait patiently along the five mile route, from the hectic train station at US 30 to its quiet new home amid the cornfields at Walt Konow's farm, 16849 S. Cedar Road in Homer Glen.

Local businesses provided water, coffee and doughnuts for the crews, who swarmed the street to raise, lower, and take down power lines along the journey to accommodate the station as it inched its way on hydraulic wheels.

"The coordination and cooperation it took to get this done is unbelievable," Jan Bentley said.

"To see the companies, the people and community come together like this is really cool," she said.

The move began immediately after the 8:30 a.m. train left the New Lenox station. It had to clear tracks before the 9 a.m. train rolled in.

Nine hours and 15 minutes later, it rested in its new place at the farm, surrounded by trees.

"It is back in a rural setting, like it originally was in New Lenox," said Lori Lindberg, chairman of the historical society.

"I think the people of New Lenox and Homer Glen showed tremendous support for this effort. I heard nothing but positive comments along the way. They will be talking about this for a long time to come," she said.

"People are happy it is being saved. That's the main thing," said Konow, who plans to have it reopened in one month. He said the bricklayers will begin Monday to lay a cinder block foundation. The building will be tuckpointed, painted and given a new roof.

While the move cost him "hundreds of thousands of dollars," Konow said he is "excited" to have a piece of local history here.

It will join the Will County landmarked Tilsey Barn, which Konow also saved from the wrecking ball eight years ago.

"It's important to keep this stuff. People need to know how other people lived back in the day," he said, noting that rail transportation "is how people got here."

Spectators agreed that this was "a nice spot" for it.

Shana Cavanaugh, of Lockport, lives across the street from the farm and said she and her family will likely visit the station. For history's sake, she brought three young girls to watch the move from the corner of US Route 6 and Cedar Road, near the I-355 interchange.

"This is quite a production. How often do you see a train station going down the street," she said.

For the utility company, it was a complex project, requiring four crews to disconnect and reconnect more than 30 power lines and remove and reattach street lights along the route, ComEd spokesman John Schoen said previously.

Nearby residents and businesses were briefly without power during the day.

Many in the crowd came to marvel at the engineering that allowed the old depot to seemingly move on its own down the road.
[post_ads_2]
According to Devin Hirt, of the Indiana-based Wolfe House and Building Movers, it's a "very smooth" computerized "smart steer system" that Wolfe designed and patented, which allows them to maneuver tight spaces without compromising the structural integrity of the building.

Several Wolfe crew members walked along the building, guiding it around obstacles, and monitored its progress on a computer screen attached below the platform.

Nancy Adams watched from the Hickory Creek bridge, as the depot inched its way onto Cedar Road.

"Whenever I see a project like this, I always find it interesting. I admire the people doing it," she said.

The historical society plans to create a booklet and a video about the entire process, which will be given to anyone making a $25 donation to NLAHS. The depot is also featured on the society's Christmas ornament this year. 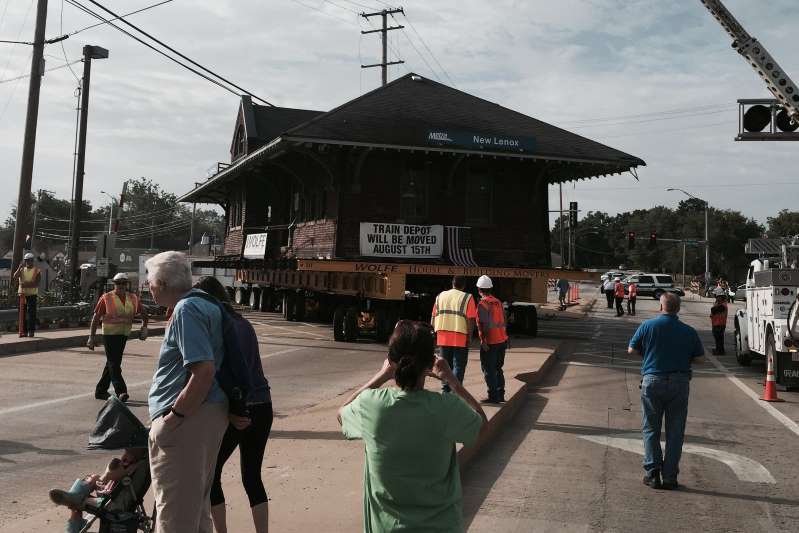