Contributor Content She may not look like one, but 96-year-old Inge Gingsberg is a rock star. She is the songwriter and lead vocalist o... 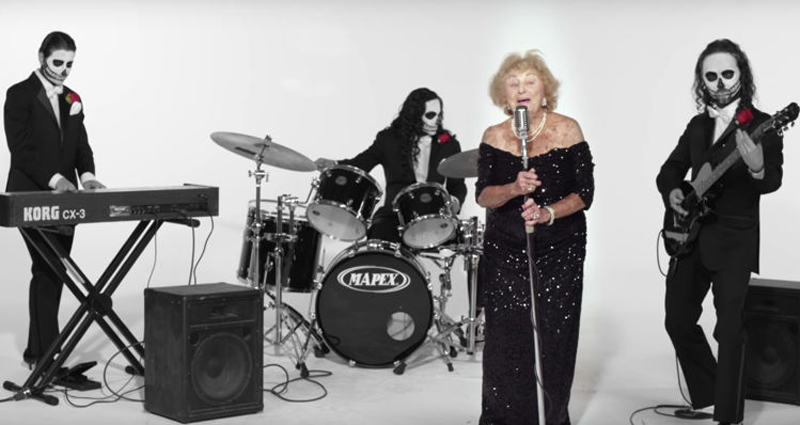 She may not look like one, but 96-year-old Inge Gingsberg is a rock star. She is the songwriter and lead vocalist of death metal group TritoneKings and is known as “Death-Metal Grandma”.

[post_ads]Inge has had quite a remarkable life. She grew up in Austria, but was forced to flee to Switzerland in the early days of World War 2, to avoid persecution. She spent years in a refugee camp, and after the war, she and her husband relocated to Hollywood, where they had to start their new life from scratch. Inge was able to begin a career in the music industry, composing songs for some of the most popular singers at the time, such as Nat King Cole, Doris Day, and Dean Martin. After a while, Inge started to get tired of Hollywood life, and decided to reinvent herself. Today, she is the vocalist of a death metal band.

“It was all fake, so I left,” Inge Gingsberg said about her decision to leave her musical career in Hollywood behind. She continued to write lyrics and poetry in her old age, but she grew frustrated with the fact that she no longer had much of an audience.


“Life is a lonely land,” she lamented, “All your parents and relatives are gone. Your friends are gone, nobody really cares what you have to say.”

But Inge was always a fighter, so instead of giving up, she realized that she would have to find a way to reinvent herself if she wanted to be taken seriously in today’s world. Inspiration came to her when Pedro De Siva, a frequent musical collaborator, read some of her work.
[post_ads_2]
“One summer, she started writing these lyrics about blood and death, and I told her, ‘this sounds like death metal lyrics.’”

Despite being in her 90s, she decided to form a metal band with Pedro. They took the name The TritoneKings, with Inge handling lyric writing duties, and Pedro and the rest of the band writing the music. This new creative outlet allowed Inge to spread her message to a whole new audience. She and the band have taken part in various competitions, such as Switzerland’s Got Talent and America’s Got Talent, and their songs have thousands of views online.

“I can write my poetry, except nobody would hear it,” Inge said, “but if I take part in the competitions, millions of people hear it on YouTube.”

But what exactly is Inge Gingsberg’s message?
[post_ads_2]
“Every one of my songs has a message,” she said. “The first one is don’t destroy what you can’t replace. But the second is a very heavy message to it: you can’t avoid death, so laugh about it.”

Despite the intense nature of her chosen musical genre, Inge’s philosophy is ultimately a positive one. Despite all of the hardships she has faced in her life, Inge has always managed to look on the bright side: “Naturally, I always smiled. I smiled myself from poor to rich. I smiled my way out of the Holocaust.”

You can learn more about Inge Ginsberg in the short film “Death Metal Grandma”, directed by Leah Galant. The film highlights the importance of learning from the wisdom of older generations. Understanding the perspectives of individuals like Inge is always important, especially so in times of political upheaval. Leah Galant hopes that his film will inspire people to appreciate their elders while they can: “I want everyone to call up their grandparents and tell them they love them!”