A group of sweaty kids darted around a field at Total Soccer Arena in Landover, Maryland, covered in bits of rubber from the turf. In between shots, passes and giggles, they chatted in English, but also in Pashto, Arabic and other languages.

All of the kids are refugees — people who have to leave their home countries to escape danger, such as war or a natural disaster. They were playing as part of a camp that gives them a chance to improve their soccer skills and to meet other kids who had to start their lives over in the United States. The week-long camp doesn’t focus only on soccer, though — it also helps kids learn lessons that can guide them off the field, such as how to respect themselves, how to manage anger and how to value other people.

The camp is run by a nonprofit organization called LACES, which stands for Life and Change Experienced Thru Sports. The group uses soccer to help bring together communities that have experienced hardships.

[post_ads]Seren Fryatt, 38, got the idea for LACES while playing on a women’s soccer team in Liberia, an African country that had been at war with itself for 14 years. Fryatt, who’s from Chicago, Illinois, saw that soccer brought joy to the Liberian women on her team, even though their lives off the field were very difficult. After starting a soccer program for kids in Liberia, she decided to start a similar camp in Maryland, where she moved in 2015. Coaches volunteer their time, and the costs are paid mostly by donations. This year, 95 kids signed up.

The camp, for ages 9 to 14, is split between drills that help kids improve skills such as passing and shooting, and sessions where they discuss strategies for life. One of the coaches, Louisa Pitney, said she likes seeing the kids grow just from being together.

“It’s cool to see them interact and learn things from each other,” Pitney said.

Two cousins, Quriesh Ahmad and Monir Rasooli, attended the LACES camp together. They are both 10 years old. Quriesh came to the United States from Afghanistan four years ago; Monir came a year later. They said they still remember all the bombs that would go off and how the people had no electricity and were always scared.

“There are a lot of people fighting in Afghanistan,” Monir said. “But when I come here, I am safe.”

Neither of them had played soccer before they moved to Maryland, but it has become the biggest part of their American lives. Quriesh has learned his best moves by watching clips of Brazilian soccer star Neymar on YouTube. Then, because he knows practice is the way to get better, he repeats the tricks over and over. The boys loved the camp because it was a chance to practice soccer and play with kids like themselves.

“When I grow up, I used to want to make houses, but now I want to be a soccer player,” Quriesh said.

Lara Karagholi, a 10-year-old camper, used to kick a soccer ball in a park with friends in her home country of Iraq. When she moved to the United States four years ago, she said she didn’t speak English and got bullied in school. Now her English is excellent, she loves school, and she has lots of friends there. At the camp, she got to meet even more people.
[post_ads_2]
“I like that we get to play together and make new friends, especially when we play a real soccer game,” Lara said.

At the end of the camp’s last day, all the kids gathered in the middle of the field. Fryatt asked them to raise their hands and say what they had learned that week. Some kids talked about soccer skills — one girl said she’d learned not to use her hands, a boy said he’d learned how to shoot.

When a coach called on one shy girl, she smiled before answering in a soft voice.

“Celebrate each other,” she said. 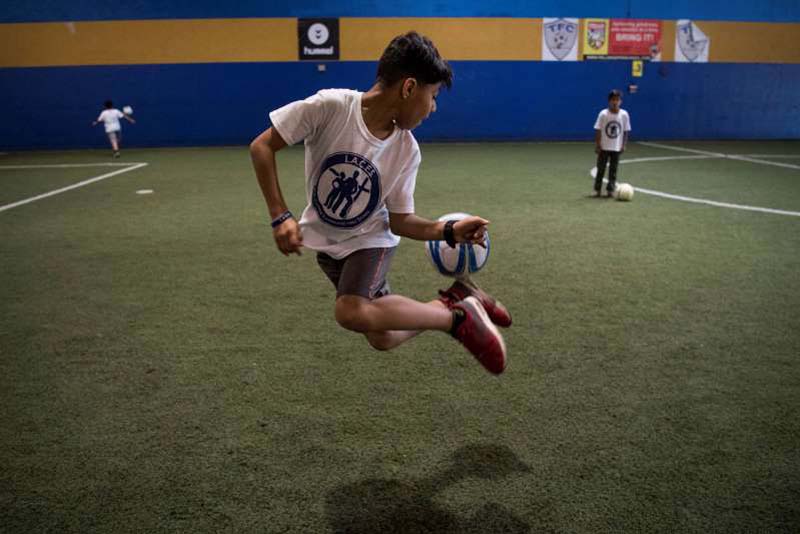