'It wasn't just saving one life, it was saving five': State lawmaker donates kidney to her ex-husband

Deb and Tim Conroy knew for 25 years that Tim would need a new kidney.

In June, she gave him one of hers.

We were seated in folding chairs in her Villa Park office, where she's worked as a state representative for the 46th District since winning election in 2012.

"Getting a kidney means getting your whole life back," Tim Conroy said, recovering at his home in Elmhurst.

Close to three decades ago, Tim Conroy was diagnosed with chronic poststreptococcal disorder, which means the bacteria that cause strep throat were attacking his kidney, triggering renal hypertension. He had a stroke at age 29.

At the time of the stroke, the couple had two little boys, Sean and Ryan. Doctors told Tim it would be five to 10 years before he'd need a kidney transplant, and he started a bevy of medications to prevent another stroke or heart failure.

In 2015, Tim's organs began to fail. He started dialysis, and the long process toward finding a kidney donor.

[post_ads]Tim and Deb had four boys by then - Brendan and Will had joined Sean and Ryan - and the couple had also started the process toward divorce. Nonetheless, Deb was tested to see if her kidney was a match for Tim.

"I knew if I was a match, I was going to do it," she said. "There wasn't even any decision to make. I knew it wasn't just saving one life, it was saving five. My boys would never be the same without their dad."

She was a match.

Tim and Deb were each assigned a medical team. After several months of testing, the surgeries - hers to donate, his to receive - were scheduled for 2016.

Then another setback: Tim was diagnosed with hairy cell leukemia, an extremely rare, slow-growing cancer of the blood. And the chemotherapy drug typically used to treat hairy cell was off-limits to Tim because he didn't have a fully functioning kidney.

Oncologists were, thankfully, able to treat the cancer with less toxic drugs, and he's been in remission since November. "It will come back," Deb said. "We just don't know when."

Meanwhile, a new kidney became more critical than ever, since it would be Tim's key to receiving the chemo he needs to fight the hairy cell.

On June 20, the surgeries were, again, scheduled.

"It was a mixture of relief and gratitude," Sean Conroy, 32, said last week. "We couldn't have been more grateful for the sacrifice Mom was willing to make for the family. We were worried about both of our parents having to go through the surgery, but we knew how strong both of them are."

Both surgeries were successful, and Deb's kidney started to function right away in Tim. Deb was home from the hospital the next day.

"I felt really good," she said. "I knew Tim was going to be OK and my boys were going to have their dad, so any discomfort I felt was canceled out by joy."

Tim is on anti-rejection drugs to help his body accept the new kidney, and his blood pressure has stabilized.

"I stopped by the dialysis unit today - a place I spent three entire mornings a week," Tim said last week. "And I felt a huge sense of relief. I wish for everyone waiting on dialysis the same chance at a whole life. And soon." Deb and Tim were officially divorced last year. They live near each other in Elmhurst and still get together with their boys, ages 32, 28, 23, 21. Deb gets some funny looks when she tells people she donated a kidney to her ex-husband.

"People fall off their chairs when you say 'ex-husband,' " she said. "I guess I just don't understand. To me, some relationships work, and some don't. But if you have children together, family's always family. That was illustrated to me even more through this journey."

She just filed paperwork to enact a live donor bill of rights. She's hoping to find a Republican co-sponsor to help her introduce the legislation in the fall. The bill would protect live donors from having their insurance rates increase as a result of their organ donation.
[post_ads_2]
"This experience put me in a new place where I realized I need to do everything I can to let people know about organ donation," she said. "It's important that people understand the surgery to donate is not that difficult. I want people to understand you can do your job and take care of your family and save a life. I want people to consider donating. Just open your heart to it."

In Illinois, 4,258 people are on a waiting list for an organ, according to Gift of Hope, a nonprofit organ and tissue donor network for Illinois and northwest Indiana. In 2018, the organization estimates, more than 200 people in Illinois will die while waiting for a transplant.

Deb hopes their story helps bring those numbers down.

"I have a little nephew, he's in that age where he questions everything," Deb said. "He goes, 'Aunt Debby. You keep saying you only need one kidney. Why does God give you two?'

"After the surgery," she continued, "I said, 'You know what, Liam? Now you know why. God gave me two kidneys so I could hold this one for Uncle Tim until he needed it.' " 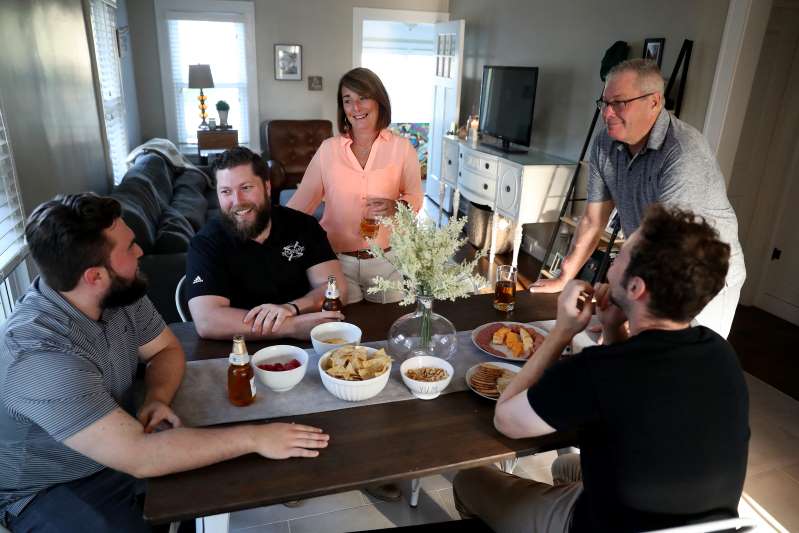