A kayaker and local legend successfully rescued a beached pilot whale believed to be the massive pod's leader, enabling local officials to herd the hundred or so pilot whales out of the Kolgrafarfjörður fjord on the Snæfellsnes peninsula in west Iceland.

Snorri Rafnsson, an avid outdoorsman and social media celebrity, was kayaking in the fjord observing the pilot whales Monday when he noticed one had come in too shallow and had become stranded.

Rafnsson jumped into the water and attempted to free the whale. He captured some of the 20-minute rescue on video.

[post_ads]"I figured out the shape of the shoal and tried to direct the animal back out to the water, pushing as hard as I could," Rafnsson told Frettablaoio, according to Iceland Magazine.

"There is a lot of kelp in the water, and he was tangled in the seaweed, so I tried to get him through this barrier. A second kayaker arrived, and together we managed to get the whale free. It was a great victory."

Pilot whales are known to beach themselves in the area so locals were concerned about a mass stranding. In this case, the rest of the pod appeared to be watching what Rafnsson would do with its leader.

Once the stranded whale was free, members of the Icelandic Association for Search and Rescue in four Zodiac boats managed to herd the pod of pilot whales out of the fjord and safely into Breiðafjörður bay.

Sigurður Helgason captured stunning aerial footage of the pilot whales, which showed the herding process at the end.

Iceland Magazine called it "the biggest story of the week, so far."

Photos are screen grabs from the second video. 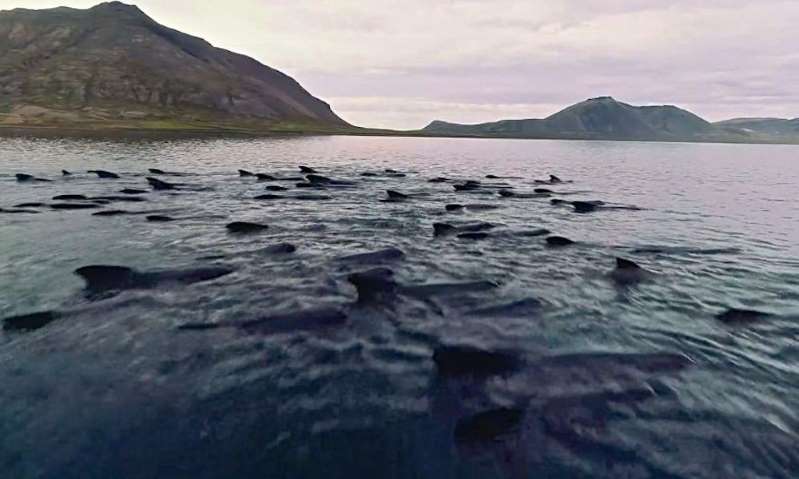