David Casarez graduated from Texas A&M University with a degree in management information systems in 2014. Three years later, after a relatively lucrative stint at General Motors in Austin, he cashed out his retirement savings and drove west to fulfill his dream of launching a startup.

Fast forward to last Friday. According toThe New York Post, Casarez began his day by waking up on a park bench in Mountain View, California. He put on his nicest shirt and tie, picked up a handmade sign and made his way to a nearby highway median.

[post_ads]Casarez, a native of Laredo, Texas, told ThePost that he had trouble finding a job in Silicon Valley, and his money ran out shortly after he arrived. Eventually he was living in his van.

"No one was hiring,” the 26-year-old said. "I had an interview with Apple in January, but the job was filled internally."

A month ago his van was repossesed and he found himself sleeping on park benches.

The stunt on the median was his last chance to make it work. “It was basically a make-or-break moment,” he recalled. “I wanted to keep my head up high, keep looking forward and see what opportunity would come next.”

“I was thinking, you know, like this was like my last stop,” he added. “If this didn’t work, I’d go back home and give up on my dream.”

Luckily, it paid off.

Casarez had only been standing on the median for a couple of hours when Jasmine Scofield noticed him. Scofield stopped and asked him if she could take his picture and post it online.

With his blessing, Scofield shared a photo of Casarez standing in traffic with his sign and a Fed-Ex envelope full of resumes on Twitter. “Today I saw this young homeless man asking for people to take a resume rather than asking for money,” she wrote. “Please RT so we can help David out!”
[post_ads_2]
The post took off, raking in more than 100,000 retweets in a matter of days. And the best part? Companies took notice—lots of them.

“Google reached out to me,” a shocked Casarez told The Post.

“So many other companies. Pandora. A bunch of startups,” he added. “A product manager from Bitcoin.com was wondering if I could work remotely or if I want to relocate to Tokyo.”

And others, like The Lambda School, reached out with housing offers. The Dallas Morning Newsreports that The Lambda School booked Casarez an Airbnb where he can stay while he's getting back on his feet.

In a tweet Casarez said he is “floored by the outpouring of support” and hopes his story inspires others.

“Thank you everyone for the outpouring of support! I am completely floored by how many are interested in my #Hungry4Success story,” he wrote. “I have met several who have been or currently are in the same situation tell me their story. I am glad to be an inspiration for you all.”


Today I saw this young homeless man asking for people to take a resume rather than asking for money. If anyone in the Silicon Valley could help him out, that would be amazing. Please RT so we can help David out! pic.twitter.com/ewoE3PKFx7
— FullMakeup Alchemist (@jaysc0) July 27, 2018 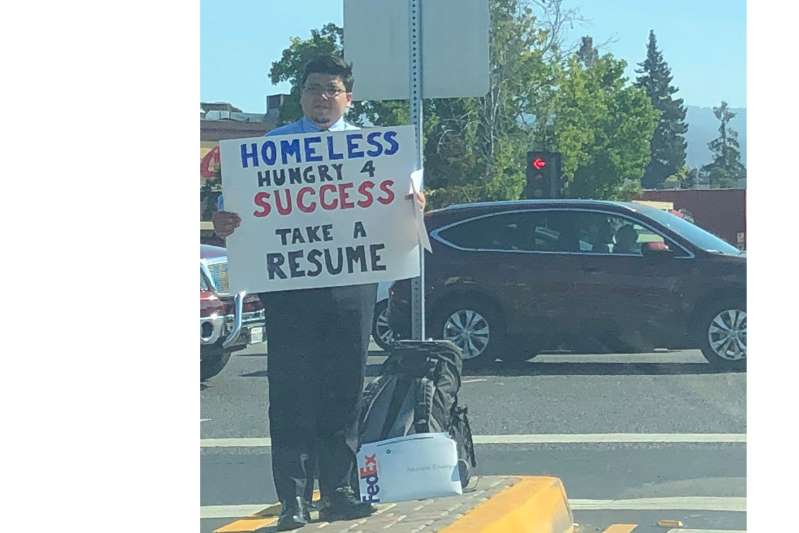