His son died in a road accident, so India's 'pothole dada' fills his family's sorrow with stone and gravel

Dadarao Bilhore clapped his hands together, releasing a cloud of dust into the moist air. He grabbed a gunnysack filled with dirt and stepped into the empty road.

With a heave of his beefy forearms, he dropped the sack into a pothole the size of a large casserole.

He grabbed a second bag he had placed by the side of the road and tipped its contents, then did the same with another. Sand, gravel and gray crumbs of concrete poured into the hole until it was level with the dark, craggy asphalt.

Bilhore bent his stocky frame over the loose mix and worked it over with the back of a rusted trowel, smoothing it like icing on a cake.

A rickshaw rumbled past, the driver slowing to watch. A foreign-made sedan drove by next, and a man in sunglasses behind the wheel rolled down the window to say, "Hey, Dadarao!"

Bilhore said a brief hello to the man, an acquaintance, but resumed working with a determined look. Finally he stood atop the flattened dirt in his sandals and jumped up and down, eight times, maybe 10 - short, deliberate hops that sent small puffs of sand wafting up from the ground and settling on his dark cotton trousers.

Sweat glistened on his forehead and pooled at the base of his neck. He stepped back from the now-filled hole and looked up at the afternoon sky, into a rustling canopy of trees at the fringe of India's commercial capital, and uttered a silent prayer for his son.

Three years ago, Bilhore's 16-year-old son, Prakash, was riding through Mumbai on the back of a motorbike driven by his cousin. It was July, which is monsoon season in this muggy metropolis on the Arabian Sea, and during a heavy storm the roads were slick with puddles.

They drove over one not knowing that it concealed a giant pothole about 2 feet deep, where an underground cable had ruptured and eaten a hole in the asphalt.

The bike crashed to a halt, throwing the driver, Ram, several feet away and leaving him with gashes on his chin and forehead. His helmet prevented the damage from being worse.

But Prakash was riding without a helmet. He flew 10 feet and landed in the street, knocked unconscious. When he was brought to a hospital, doctors said he had suffered a brain hemorrhage and had died.

Potholes are one of the gravest public safety problems in India, reportedly killing nearly 10 people every day in 2017, as cars fall into them or swerve violently to avoid them.

In Mumbai, where about 20 million people are crammed onto a finger of land on India's western coast, the driving summer monsoon rains expose the slapdash efforts of city workers and contractors, opening up dangerous craters along major thoroughfares and leaving even freshly laid roads looking like unfinished jigsaw puzzles.

Some road safety experts have contended that transportation officials should face homicide charges owing to their negligence.

"They are playing with people's lives with that kind of shoddy work," Bilhore, 48, said on a recent afternoon in the tidy, high-rise apartment he shares with his wife, Menavati, and their 22-year-old daughter.

Prakash, the family's second child, had been a promising student, and Bilhore dipped into savings from his small suburban grocery to enroll him in English-language schools. Days before he died, he had been shopping online for new clothes for college.

Those purchases would start to arrive at their doorstep in the days after his death.

At his memorial service, family members and Prakash's classmates shed tears. Bilhore vowed then to do something "to repay the love people had shown my son."

When he returned to the grocery a few days later, he found a pothole in the road right in front of his shop. He filled it with dirt.

Since then, Bilhore has become a one-man road crew, filling potholes across the city with stones, gravel and paver blocks he hauls around in the back of his Indian-made Maruti minivan.

He estimates he has filled nearly 600 potholes in the 36 months since Prakash's accident. In the Indian news media, he is sometimes called the "pothole dada," or "pothole elder brother."

"I do this so that hopefully no one else suffers the pain I did," he said.

In this way Bilhore's mission embodies twin features of modern India: the official negligence that holds back its booming cities, and the individual entrepreneurship that ordinary citizens must exhibit to overcome the failings of their state.

He scours construction sites near his home in Mumbai's northern suburbs for debris that can be used to fill holes. He sends updates on his activities to a WhatsApp messaging group - named "Pothole Killers" - with nearly 100 members.

Foremen on construction sites in his neighborhood - every corner of Mumbai has at least one new apartment block rising from the earth - know him now and set aside bags full of debris and dirt, which Bilhore stores on the ground floor of his building between a few parked motorcycles.

City authorities have not acknowledged his work, even as he fields calls from journalists, companies and nonprofit organizations wanting to support him with small donations.

Although he acknowledges that his repairs are patch jobs and no substitute for proper roadwork, it often takes weeks for municipal crews to respond to reports of potholes, he said.

"Maybe this is a Gandhian way of exerting pressure: If you do other people's work for them, you can shame them into doing something," he said.

As he finished tamping down the dirt on a second pothole near his apartment, four students wearing backpacks and jeans walked by and took notice of the middle-aged man in glasses and a short-sleeve button-down shirt laboring with bare hands in the sticky heat.

"Are you a volunteer?" one asked.

"Thank you for what you're doing," another said, and Bilhore smiled for the first time all afternoon. 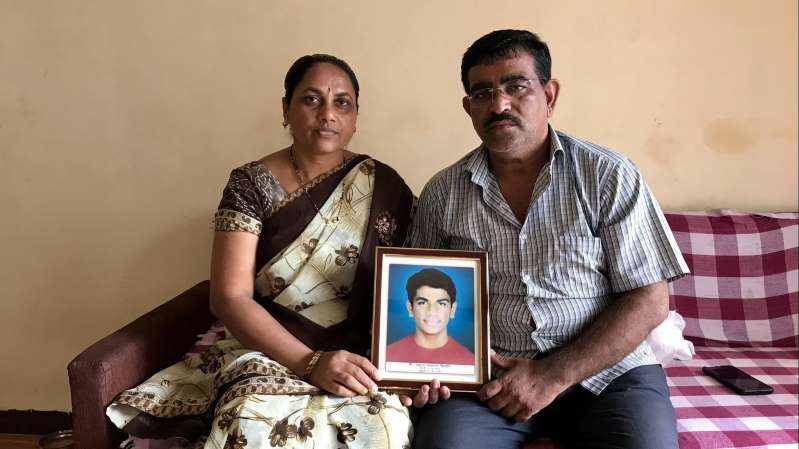