© Courtesy Ted Kasper By Cathy Free , People Tia Vargas was on her way down the trail to meet up with her father after reachi...

Tia Vargas was on her way down the trail to meet up with her father after reaching the 11,106-foot summit of Table Rock in the shadow of the Grand Tetons last month, when she saw a large English Springer Spaniel limping alongside a couple of hikers who were trying to find the dog’s owner.

“They asked if he was mine and said that they’d seen a note at the bottom of the trail mentioning that somebody had lost their dog,” Vargas, 40, a single mother of three from Idaho Falls, Idaho, tells PEOPLE. “The tag on his collar said his name was ‘Boomer,’ and I could see that he was hurt. The other hikers wanted to get to the top of the mountain, so I decided right then, ‘OK, Boomer, I’ll help you.'”

Hoisting the 55-pound canine onto her shoulders, Vargas hiked a mile down to where her father, Ted Kasper, 76, had decided to wait for her because he was too tired to walk to the summit.

[post_ads]“He laughed and said, ‘You don’t think this hike is hard enough without carrying a heavy dog, too?’ ” she recalls, “and I told him, ‘Dad, this dog is lost and hurt. There’s nobody else. I can do this.’ “

As it turned out, that July 5th afternoon on the mountain soon became one of the most difficult challenges of Vargas’ life.

Due to snow and debris that covered an easier trail down with switchbacks, Vargas and her dad got lost twice and ended up on the wrong side of the river. At one point, Vargas had to put Boomer in her lap and slide down a snowy slope on her behind because she couldn’t find another way to the trail.

And then, it started to rain.

“It got to the point where my neck and legs were in so much pain and I was so scratched up and tired, I didn’t think I could go on carrying Boomer,” Vargas tells PEOPLE. “I was in tears, thinking that I’d have to leave that dog behind. And I didn’t want him to die.”

After saying a silent prayer, “I suddenly felt like somebody had walked up behind me and lifted Boomer off my shoulders,” she says, “and I realized that I had to buck up and do this. If I didn’t get him off the mountain, I knew that he would die.”

Vargas shared her cheese and crackers with Boomer on the trek, while her dad gave up the ham in his sandwich. “Boomer was obviously hungry,” she says, “and he was in a lot of pain. We felt grateful to have something to give him.”
[post_ads_2]
Finally reaching the bottom of the trail at about 6 p.m., Vargas found the note left by Boomer’s owners and called them. The family was hiking up Table Rock Mountain on the Fourth of July with the canine when he wandered off and fell 100 feet down a snowy crevice.

“When they went to find him, he was gone, and they figured he had found a bush somewhere to hide in and die,” says Vargas. “They searched and searched for him, but he’d disappeared.”

The family had planned to sell Boomer to a man who needed a hunting dog, but upon hearing that Vargas had heroically carried him on her shoulders for six miles, they offered to let her have him instead after he’d been treated for a dislocated foot and torn ligaments.

“I haven’t had a dog in 15 years, but Boomer is part of our family now,” Vargas tells PEOPLE. “I feel like there’s a reason why I was on the mountain at the very moment that he needed somebody to help. Both of us had a guardian angel that day.” 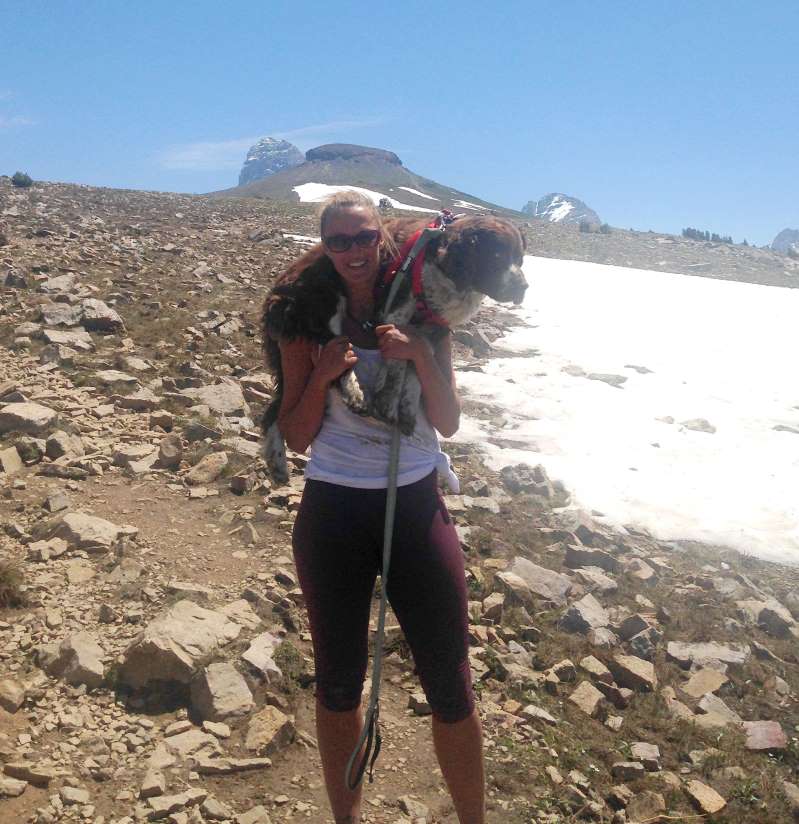