A hero groom interrupted his wedding in order to dive into the ocean and rescue a drowning teenager.

Coast Guard petty officer Zac Edwards, 37, was posing for photos with his bride Cindy Edwards, 32, when a woman screamed out after spotting 18-year-old Jamel Robinson struggling in the water.

Zac told Good Morning America that Cindy told him he had to swim out and save the boy, adding: 'You have to listen to your wife, or you're in trouble.'

Zac managed to strip off his shirt and was going to remove his pants but Cindy told him there wasn't time as she watched Jamel drift further from shore.

[post_ads]With rescuers helping to pull someone else from the water elsewhere on the beach, Zac dived in still wearing his pants as Cindy waded into the surf in her dress.

The teenager had been pulled out on a boogie board by strong currents at Shell Beach in Gulf State Park at 6pm on August 3.

Zac reached the teenager and propped him up on the boogie board to keep his head above water.

The pair made their way towards the shore against the current but bride Cindy, a sales manager, was worried than her new husband was growing tired.

She saw the pair slow down and eventually stop moving as a dangerous current continued pulling them out to sea.

Zac helped first responders wedge the teen onto a jetski before jumping on himself and returning to shore.

He said: 'Cindy and I were taking our photos together by the water and we were just wrapping them up when a woman told us there was a teenager in the water struggling.

'You could just tell by the look on his face he was in difficulty. When we first saw him he was about 50 yards out.

'I took off my shirt, but my wife said I didn't have time to take off my pants.

'I ran into the water. I told some kids to go back to the beach and I took a boogie board. I'm so glad I did that.

'I eventually reached him but we were about half a football field away from the shore. He just kept saying "I can't breathe".

'I tried to keep his head above water and I propped him up onto the boogie board.

'The current was really strong and it was stopping us coming in any further.. I was starting to panic slightly. The pants were making it hard to kick too.

'But when I saw the first responders I knew it was going to be okay. A jet ski came out to us and I managed to wedge him up onto it.

'I didn't really take in the gravity of the situation until I laid down that night. Afterwards my hands were shaking but the adrenaline was just pumping.'

Rescuers said there were red flags out that day, but Jamel failed to heed the warning.

Speaking after the incident, Jamel said he wanted to thank Zac for saving his life. 'I really appreciate that,' he said.

Cindy added: 'I wasn't panicked until they were swimming back in. I could tell Zac was tiring and they couldn't get over the current.

'They had stopped and I was worried. Thank God the first responders arrived.

'The life guards dived into the water and there were helicopters were patrolling the waters.

'Our emergency services in Orange Beach can't be commended enough.'

Luckily, the teenager has recovered from the incident but Zac, of Spanish Fort, Alabama, said it is important to exercise water safety when visiting beaches.

Cindy and Zac, who each have three children, said they are extremely cautious when they spot the high hazard red flag on their local beaches.

Zac said: 'I think people underestimate the ocean. It wasn't his fault at all but it was a red flag day.

'People don't read the signs and swimmers need to be very cautious. Even experienced swimmers can get into difficulty.

'I wouldn't let my kids go more than knee deep on a red flag day.

Cindy added: 'I would just like to stress the importance of water safety.

'In our community 120 people have had to be pulled out of the water in the last few days.
[post_ads_2]
'Our beaches are family friendly and have multiple first responders to keep people safe.

'They do such a wonderful job but it's up to us to be water safe too.'

The couple, who had been together for a year before tying the knot, shocked their 35 guests when they turned up at their reception at The Gulf in Orange Beach soaking wet and covered in sand.

Cindy said: 'Our guests were completely lost when we arrived at the reception. I was soaking wet and my dress was covered in sand.

Zac added: 'I didn't bring extra clothes to the wedding but I did have some board shorts so I just changed into them.

'I was a bit more dressed down than my beautiful bride but they were more comfortable than my pants were actually.'

Pastor Glenn Henson who officiated the wedding commended the groom for his act of bravery.

Glenn said: 'It was incredible.

'The fact that this man took time out of his special day to save someone else was really special.

'I talked to Cindy and Zac afterwards and we definitely think it was fate that he was there. It was providential.' 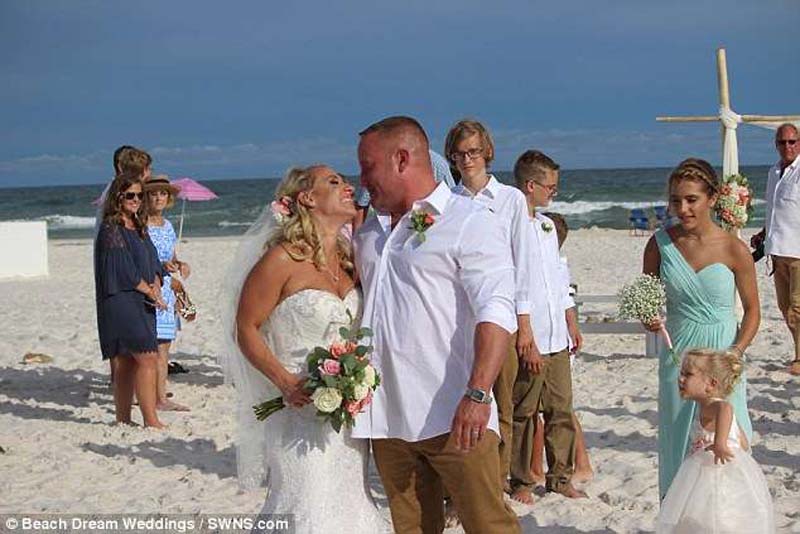