Here's how a chicken became a celebrity

© John D. Simmons/Charlotte Observer Henrietta, the chicken, search for food under a large oak tree on Aug. 3, 2018. By Cristi...

By Cristina B. Bolling, The Charlotte Observer
CHARLOTTE, N.C

She stands about 18 inches tall from comb to toes, and she's been the talk of Ballantyne all summer long, prompting hundreds of comments on social media posts, gossip in the checkout lanes and amusing conversation at neighborhood cookouts.

Have you seen the chicken that lives at the Harris Teeter?

Yes, and I heard she tried to jump into a grocery cart yesterday!

We don't typically give much thought to fowl wandering through Charlotte parking lots, but this is a strange exception, because this hen began taking up residence in front of the Harris Teeter at John J. Delaney Drive back in April.

And now it's August.

[post_ads]And Henrietta the chicken — named by Lisa Haggerty, the barista who opens the Starbucks inside the grocery store before dawn each weekday morning — is still making daily appearances, strutting out from her favorite hiding spot in the bushes around 8 a.m. each morning to spend the day greeting patrons and startling drivers.

How she got there is the stuff of both credible stories and urban legends (more on this later), but one thing is clear: With the exception of the black bear that terrified Stonecrest shoppers in June, nobody can remember a time when an animal has so captivated the 28277.

If chickens can have friends, Haggerty is pretty sure Henrietta considers her one. Because like clockwork around 10:30 a.m. most days when Haggerty takes her coffee break in front of the store, the hen comes right up to her in a way she doesn't approach most people —sometimes with a head-bobbing waddle, sometimes flying seemingly out of nowhere.

"At first, I would get up and start moving and she would follow me from one spot to the next," Haggerty said. "I think she was just looking for companionship."

As if on cue, just after 8 a.m. on a recent morning, Haggerty chatted with a reporter and just moments later Henrietta made her first appearance of the day, clucking around a bank of shrubs and trees beside the Express Lane pickup station.

She's made other friends, too. Kim, who works the overnight shift brings Henrietta bits of food when she gets off. Karen, who makes pizzas, checks up on her each day.

And then there are the customers.

"They ask about it every day. 'Have you seen it? When's the last time you've seen it?' " laughs Amanda Richmond, an Express Lane picker.

Twenty years ago, this store could have been considered almost in the country, as Ballantyne was then one of Charlotte's farther-reaching suburbs. But as Charlotte development has stormed south past it down Johnston Road, the store is now at the apex of the area's bustling center. And this Teeter is now a 'super-flagship,' as one of the chain's biggest-grossing stores. (You can buy a fresh lobster and prime-rib dinner at the front of the store on Thursday nights, and there's a full-service bar inside.)

Of course, none of this matters to Henrietta, except perhaps the quality of the food scraps that occasionally fall beside the compost heap behind the store, which employees surmise are where she gets her meals.

Clearly, she's getting fed, as social media photos chronicling her stay in Ballantyne have shown her getting progressively meatier. But no one knows exactly how.

How Henrietta arrived in Ballantyne also seems a mystery — to everyone except local resident Susan Donkle.

As Donkle recalls, her animal-loving teenage daughter took a call from her boyfriend one Friday in April about a chicken running wild at the Harris Teeter.

So when mom and daughter pulled into the parking lot to see said chicken, a landscape worker handed Donkle a baby chick and explained in broken English that both the grown chicken and the baby chick had hitched a ride to the Teeter on his pine needle truck.

Donkle and her daughter, Jenna, tried unsuccessfully to use the chick to lure the chicken into their car so they could take it to a waterfowl rescue facility. But when that failed, they called the rescue group, whose workers spent hours chasing the chicken with a net through the parking lot, behind the neighboring Rite-Aid and around the corner, to no avail.
[post_ads_2]
"It was very comical," Donkle recalls.

Some shoppers and employees swear they saw Henrietta a mile or two down Johnston Road in the weeks preceding her arrival at the Teeter, and think maybe she just decided to stop at the store because it's a good spot for food and companionship.

Carolina Waterfowl Rescue workers say they're amazed Henrietta has lasted this long in that spot.

Chickens "require shelter and predator proofing. I am honestly surprised she has made it this long. I think someone in the area is taking care of her," one staffer said.

Cassius Divver, a Starbucks barista, says he appreciates the uplift Henrietta has brought to the store this summer.

"It's definitely something to talk about. It kind of spices things up," Divver says. "It's like a ghost or something. 'Have you seen Henrietta today?' " 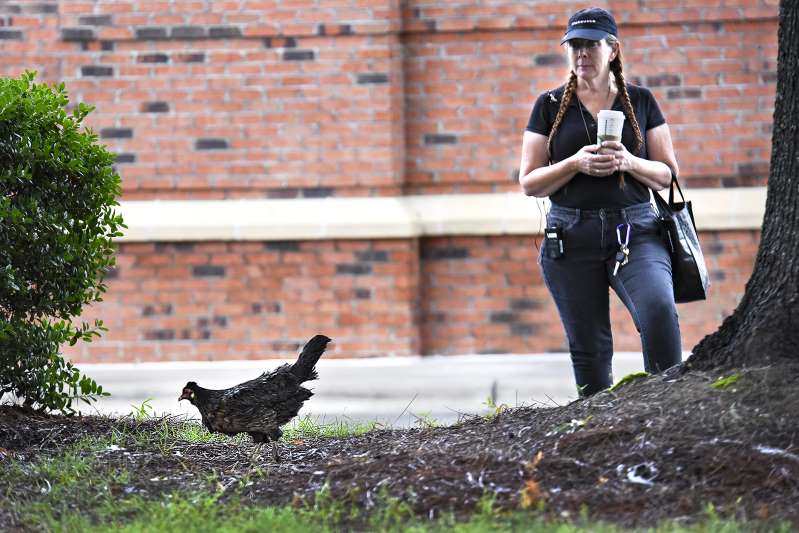